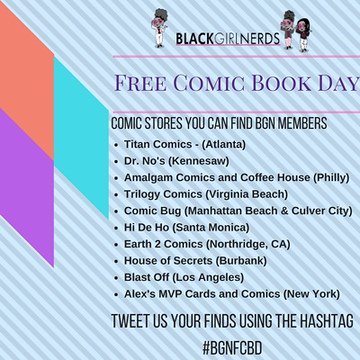 It’s that special time of year, when the flowers are blossoming if not for the advanced climate transformation, people are taking their jackets off unless such an action constitutes a heretofore-undefined preexisting medical condition, and aww who am I kidding, this is a complete mess. But aside from being a mess, it’s also the 15th annual Free Comic Book Day!

Free Comic Book Day (a/k/a #FCBD to the kids, #BGNFCBD to the cooler kids) is that glorious time of year when we rush off to our local comic shops, line up for the free distributed special comics they have an offer, then ask for what’s left when we find out that all the Marvel and DC ones have run out. Or maybe that used to be the case. In recent years, more and more independent publishers have been crafting unique offerings for participants, often in the form of great teasers for work you may be unfamiliar with or otherwise hesitant to try out on a blind purchase. To this end, I’ve cultivated a list of some superb titles that have nothing to do with an ongoing live-action cinematic universe.

Not only are these titles great entries to stories new and old, they provide an ideal excuse to drop a few dollars at your local comic shop for a heavier bag than usual. 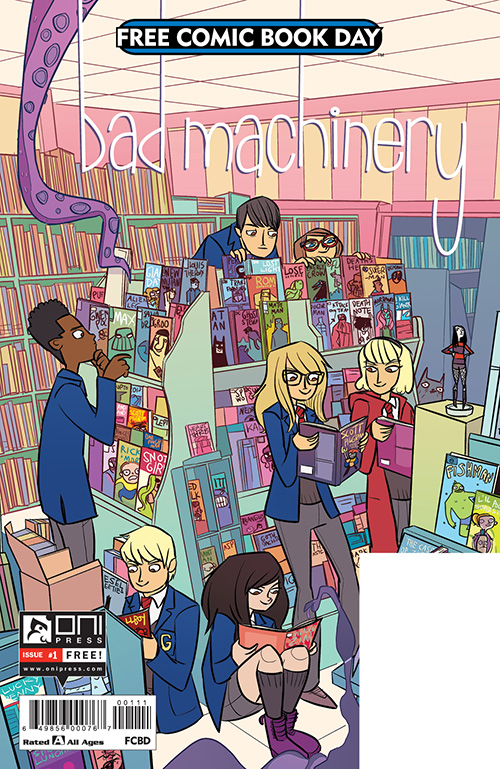 John Allison’s webcomic – which I had no previous knowledge of – is being collected in paperback by the fine folks at Oni Press, and is an absolutely hilarious, witty, vibrant, and charming school mystery story that takes place in the fictional town of Tackleford, England. I am not exaggerating when I tell you that I smiled like a complete goon through every single page, and frequently laughed out loud. Allison’s art is clean, lacking texture yet evocative, and the dialogue sizzles from scene to scene. Luckily, collected versions are already available, and this will be the first post-FCBD purchase I’m likely to make. The story is all-ages-accessible to boot, though more of the humor will arguably be picked up by older teens or adults; there is a side-splitting scene where a young drama class of mostly women rehearse a scene from Glengarry Glen Ross. I simply cannot recommend this book enough. 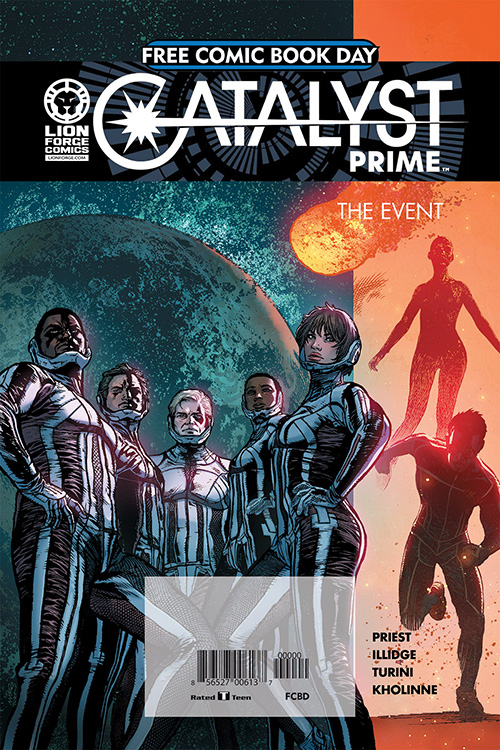 Joseph P. Illidge’s triumphant label launch is off to a perfect start, with Noble #1 appearing earlier this week, and this title being part of FCBD is just maintaining that momentum. Catalyst Prime features Christopher Priest’s inimitable writing (along with art by Marco Turini and Will Rosado, among others), telling the significant world-building story at the center of the Lion Forge world. Lion Forge has been built from the ground up as a publisher centered on characters of color, and this story alone will probably inspire most to check out their other upcoming titles, all of which take place in the same fully-realized universe. While not listed as a mature-readers-only title, Catalyst Prime is cerebral, complex, and, like much of Priest’s writing, may take a few reads to fully navigate its nooks and crannies – I personally see this as a good thing. You want to be on the ground floor for the Lion Forge launch, and you can start here for free! 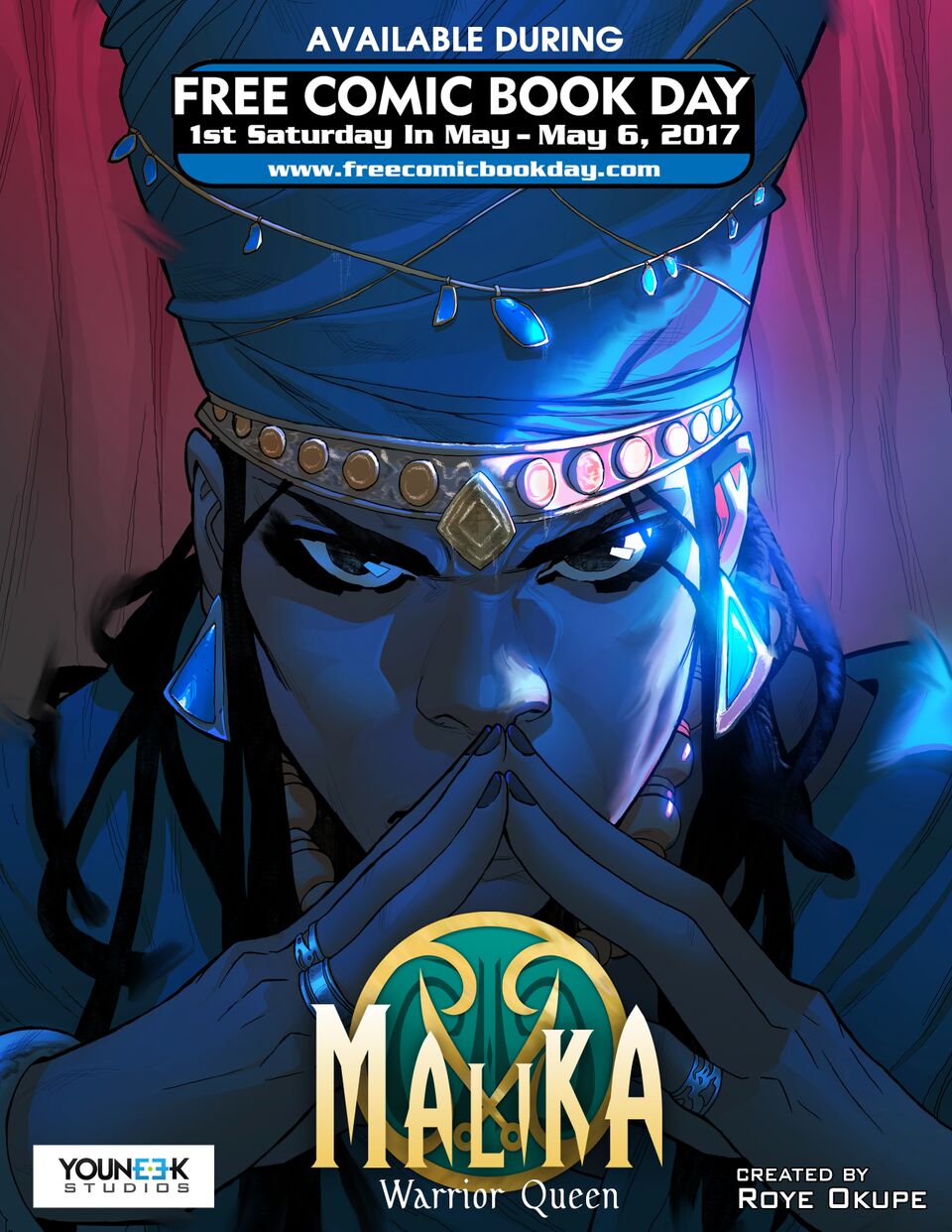 Creator Roye Okupe has already made a name for himself as the creator of E.X.O. – The Legend of Wale Williams, a series based on a Nigerian science-empowered superhero. YouNeek Studios continues to dole out new types of comic stories centered on the continent, and Malika is a wonderful new addition to the roster. The titular character is carefully realized as a leader and monarch weathered by experience in battle, capably violent, confident in her strength, but generously diplomatic and wise. To be honest, the premise and story already come off as a potential basis for a great new tv series. 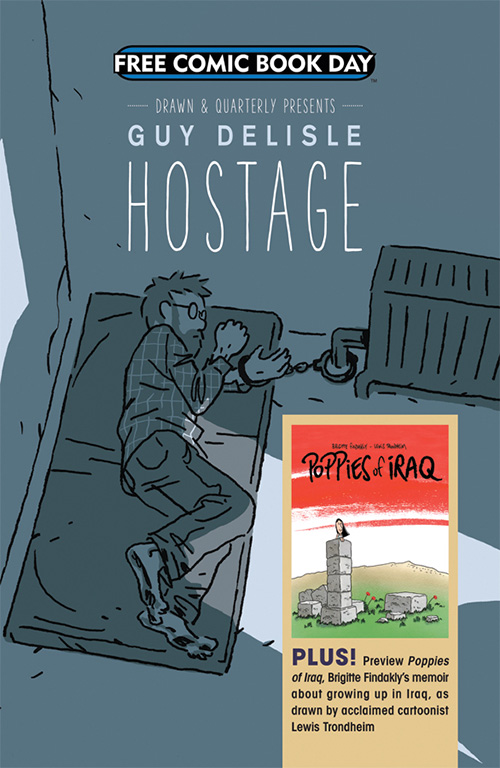 There are actually two comics in here, the first being a selection from Hostage, which is a true story about a Doctors Without Borders administrator who was kidnapped, and his subsequent struggle to survive and maintain his sanity. It’s a rough read. The second story Poppies of Iraq, which completely floored me, is by writer Bridgette Findakly and French comics legend Lewis Trondheim. A journal-style narrative with a measured, ruminative tone, Poppies is a kind of cultural memoir that communicates, among other things, the life and upbringing of an Orthodox Christian in an Arab community. The small sample here left me aching to read more, and learn more about the writer herself (turns out that she’s actually married to Mr. Trondheim, which may be one reason why this collaboration feels incredibly intimate). 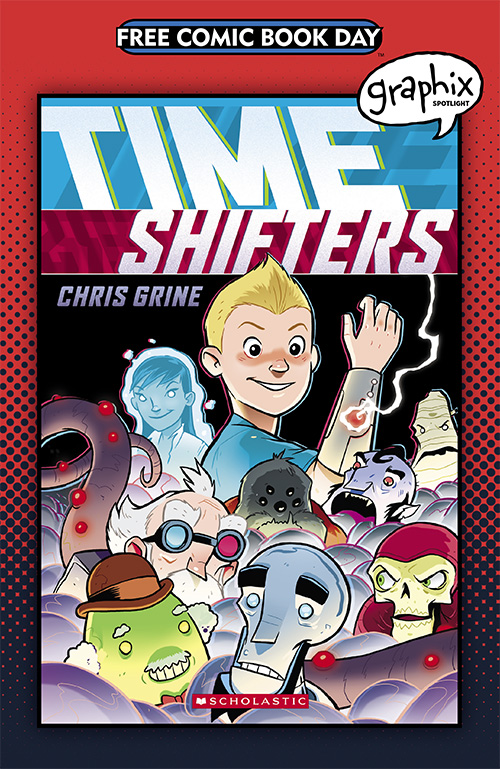 Chris Grine’s science fiction romp is breezy, bright, and enormous fun. Vampire Napoleon, skeleton spacemen, and portal-hopping high-tech weirdness abound. Grine has all the marks of a great cartoonist, with expressively oddball characters that reminded me a little of Scott C.’s designs for the videogame Psychonauts. Although the book seems geared at preteens or young teens, I found the irreverent humor in it greatly effective. I’m slightly confused as to the apparent inclusion of a death scene (a scene which isn’t in this particular issue, but of which you can read more about here), so bear that in mind if you decide to pick up the collected edition later this month. 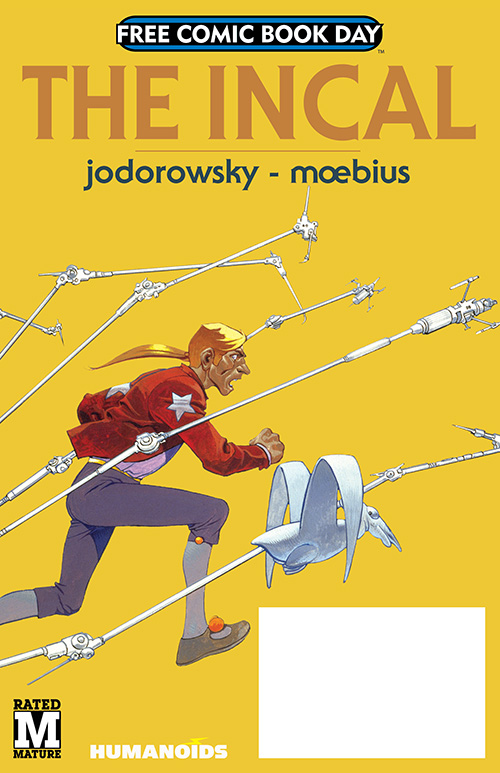 It’s The Incal. It’s Alejandro Jodorowsky at his most infectiously creative and bold, with entrancingly intricate Moebius art. It’s apparently the single best selling science fiction comic of all time. If, for some reason, anyone has yet to experience the bizarre, violent, kinky majesty of this world-renowned classic, this may kindle a new obsession (luckily, most of it should be reliably in print these days). If you’re interested in the further adventures of class “R” detective John DiFool, just bear in mind that it gets wilder, gutsier, and weirder, with gory encounters, torture scenarios, cult murders, and even sexual assault. Jodorowsky and Moebius construct a beautifully imaginative yet lethal world that might not be everyone’s cup of tea – make sure to keep this one away from the kids. 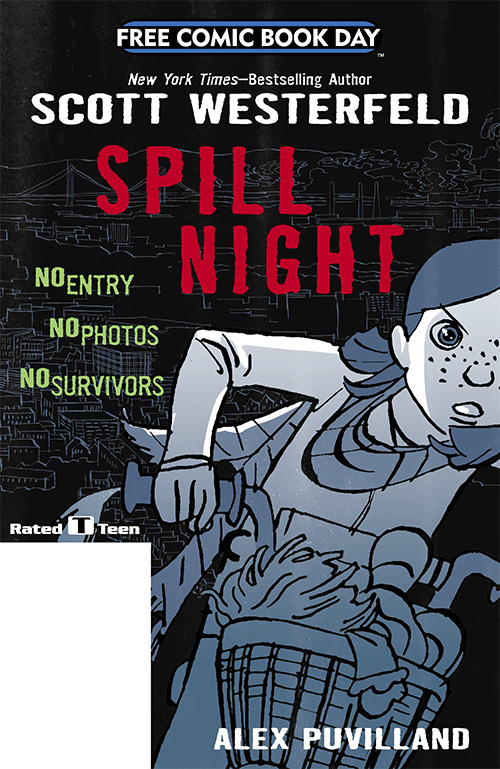 Scott Westerfield and Adam Puvilland’s surreal, hallucinogenic suburban apocalypse comic Spill Zone (of which this story is a sample) kind of sneaks up on you. There is something about the artwork that seems childlike and unassuming, but in this short story you can intuit that there are some truly dark forces present, as well as some haunting mysteries and curiosities. It’s hard to explain, but the contrast between the storybook-appearance and the ghostly technicolor aftermath of whatever exactly happened to the town and the world surprised me. The comic is marked for teens and, while there wasn’t any gore or sexual content, there is definitely stuff in here that might creep out very young children. 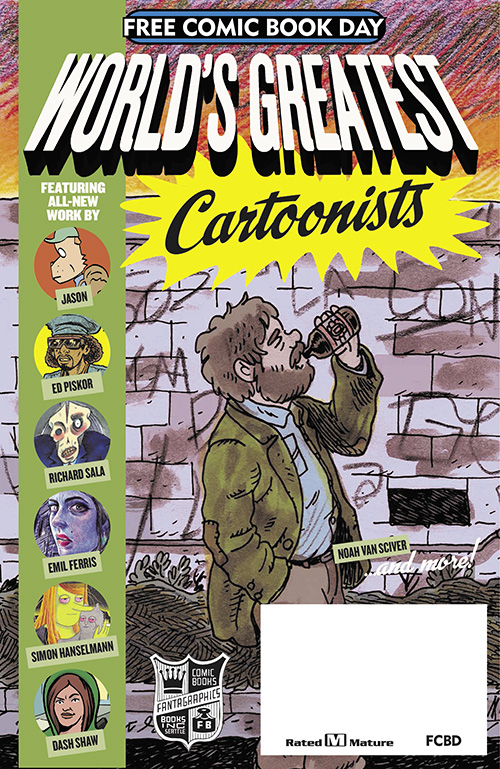 An anthology including some of Fantagraphics’ excellent roster of creators, there’s definitely going to be something in here you love. There were two sections in particular featuring creators I was unaware of, the first being Emil Ferris’ compelling notebook-style fictional memoir about a girl whose sense of self is conflated with classic monster movies. Ferris’ art and presentation is literally drawn onto lined notebook paper, which makes the story feel more familiar, almost voyeuristic. The second author who really grabbed me (pun intended) was Ed Luce and his comic Wuvable Oaf. A kind of ergot-soaked wrestling daydream, each page pummels your eyes with color, while also having a few interesting statements to make about an person’s agency. I’m wondering if Luce’s other Wuvable Oaf comics reside in these spaces of creative political commentary. Also, a muscly eagle-man punches out Tr*mp at some point, so that’s a bonus. 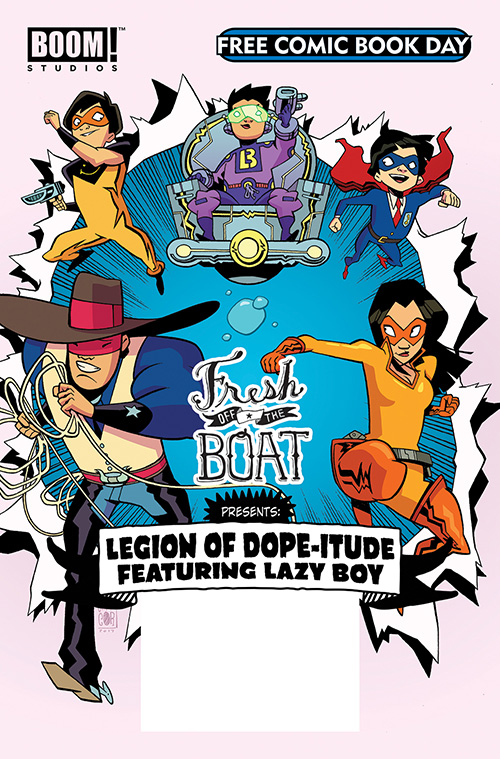 MacArthur Fellow and brilliant graphic novelist Gene Luen Yang writes this delightful one-shot spun off from the television series Fresh Off The Boat. In it, the characters become superheroes based on a comic book, who then thrive as publicly-lauded celebrities in their town of Orlando, FL (jokingly, repeatedly referred to as “the city beautiful”). Yang remains one of the finest creators in comics, able to tell a complex, dramatic tale with aplomb, yet also reveling in something as silly and upbeat as this. This is one of the best humor comics being offered for free on this day. 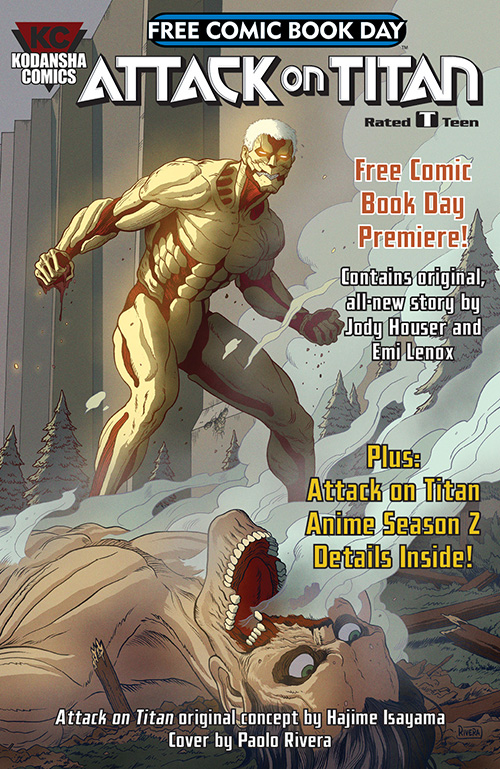 Written by Faith’s Jody Houser with art by Emi Lenox, this supporting story for breakout anime hit Attack On Titan is a worthy diversion, telling a private one-shot that mixes the absurd yet believable lengths of human sensitivity, cruelty, ignorance, and fear all in one, just like the show and the manga it’s based on. In the original manga, I always enjoy being able to read little side stories like this one, as they help flesh out the larger, mostly-unseen world. If there is one comic on FCBD that isn’t Marvel or DC but will vanish quickly, it’s probably this one.

Phew, I’m done. What do you all think? Are there any essential FCBD 2017 books that I missed? Feel free to shout us out on social media or in the comments below. Best of luck on your haul!