BGN had the hottest ticket in town Friday, April 12 for the Star Wars Celebration Chicago.

We truly did score this time. The tickets had been sold out for months (except for Monday and not much is happening then). The panel to be in was the Star Wars: Episode IX panel that was packed with reveals, shocking info, and stuff you won’t hear anywhere else. Here are the top 10 moments that did us in on our first day at the celebration.

Billy Dee Williams, who plays the infamous Lando Calrissian in the Star Wars franchise, spoke on all things Lando at the panel. However, when host Stephen Colbert asked Williams if Lando was really a good guy, Williams gave an answer no one expected. “I have to explain this to people, and I don’t understand why.” He goes on about how Lando is not the only morally gray guy in the series, and in fact, the man has saved the main characters many times. Williams asks, “but did you die?” He shut Colbert down and made the crowd go wild, by channeling an equally shady Mr. Chow from The Hangover.

No character in the history of the Star Wars franchise has been so viciously attacked in public as Kelly Marie Tran, for playing Rose in The Force Awakens. Racist and alt-right Star Wars fans attacked the actress for her statements on diversity. Tran was also the target of hatred at the diversity Star Wars was introducing into its roster of featured characters. Tran iterated a truth that even I as felt as a Black girl growing up with Star Wars. We had to imagine ourselves in the role of the characters we were given. We had no one that looked like us.

She was bullied and threatened so bad that the actress went off social media for quite a while. Today, when Colbert announced her, the fandom welcomed Tran back with standing applause the went on longer than the applause for JJ Abrams, the director. Tran blushed and thanked the crowd as people shouted, “We love you!” from the crowd.

Black Girls Represent on the Force 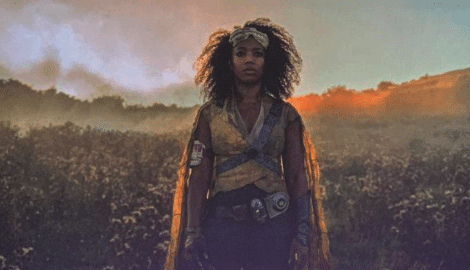 They got a new Black girl on the team! Naomi Ackie was introduced to the crowd. She will be Jannah, a character who may or may not be one of Lando’s love-children. As we let the shot wear down, she told the story of the day she found out about her role. Ackie got a call for Abrams and apparently made a commotion over landing the role of a lifetime. Her father shushed her and told her she was putting on a bit too much noise.

The Reveal of 4 New Aliens

Abrams revealed 4 new aliens that will be joining the franchise. We look forward to more information on these characters as they come. 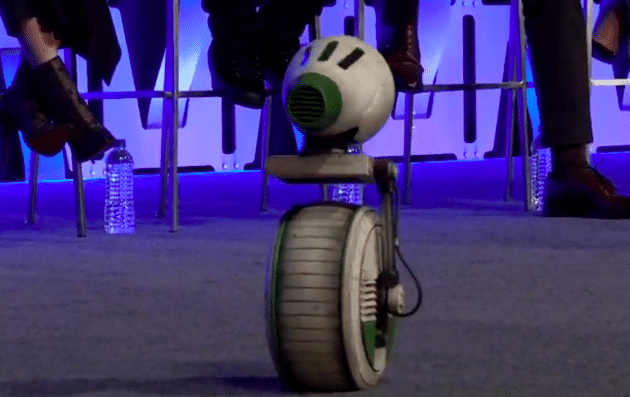 A new and very cute little droid rolled onto the stage. Dio is joining, BB8 and R2D2 as the scene-stealing mechanical cuteness of the series. He seems to get along with the others. Let’s hope things are amicable in the film as well.

The audience broke into an improper, ground-swelling birthday song that surprised Daisy Ridley, who plays Rey in Rogue One and The Force Awakens. She basically told everyone that she a Kylo Ren, played by Adam Driver (who was not in attendance), would not be romantic in the new installment.

Stephen Colbert was one of the earliest Star Wars fans 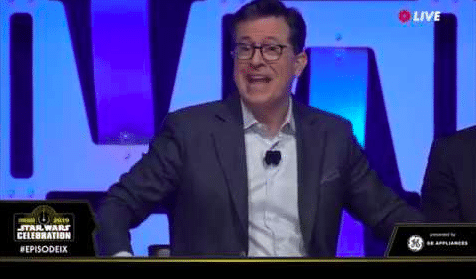 Colbert revealed to the crowd that he got to see an advanced screening of the first Star Wars movie A New Hope in 1977. He recounted the story of winning movie tickets from a radio station. He and a friend went to see the movie three weeks before it premiered to the rest of the nation. He is one of the oldest fans, “three weeks longer than any of you,” he told the crowd.

First, the title Star Wars Episode IX: The Rise of Skywalker just teases that one of our favorite main characters will be back. It helps that Mark Hamill, who plays Luke Skywalker, has already hinted that he will be back for this film. Then, a dark damaged body in the distance has the distinct dimple of a Death Star destroyed. Then, Carrie Fisher’s image which conjured tears. But, the thing that got me was the voice at the end, after the trailer. The lights went up revealing the actor Ian Mc Diarmid who played Darth Sidous in The Phantom Menace. He growled, “roll it, again,” and everyone went wild as the trailer played another time.

At the panel “20 years of Lego Star Wars” I learned a few things. First, all of the designers of the Lego Star Wars books, games, toys, and animation are fans of Star Wars and/or Legos. One of the game designers admitted to having more Boba Fett figures in his office, “than a 50-year-old man should have.” They then unveiled the must-have toy of this festival —the Tantive IV. The toy will be released on May 4. However, 250 of them will be available for sale this weekend.

That is if you participated in and won a lottery to purchase one of 50 of the toys that will be available each day.

Goodwill is here! With Goodwill prices too!

For the Star Wars fan who is on a budget, there is hope of taking home a souvenir. I stumbled upon a Goodwill booth tucked away in Exhibition Hall. Booth 2354 is run by the thrift store charity that resales donated items in order to raise money for community outreach. Stop by for a secondhand tee or lightsaber. It may not be new in the package, but it will be new to you and a Star Wars souvenir!

Disney+ ‘The Mandalorian’ Unveils New Photo Stills from the Series!