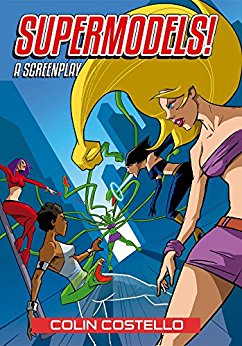 Aside from earning the Emmy nod for the PBSKids educational series, “Moochie Kalala Detective’s Club,” Colin is the writer of the 2013 theatrical family film, “The Stream,” the writer/producer of the award-winning international DC Comics fan film, “Committed,” and the writer/director of the upcoming short thriller, “The After Party.” He has also won or placed high in numerous screenwriting contests ranging from Screencraft to the Filmmakers International Screenwriting Awards.

Here’s the synopsis of his new female-driven superhero action/comedy, “Supermodels!”:

Chloe, Max, Francesca, and Tania are successful supermodels. Despite promising careers, paranoia about their future plagues them as they age.

To counter the effects of aging, Van Swoon Cosmetics is developing a new cosmetic line, Superheroine, an advanced formula that uses nanobots carrying alpha particles that manipulate the wearer’s DNA. Bowing to corporate pressures, development of Superheroine is rushed. When the four models are exposed to the cosmetic during the launch party, they become ill and collapse. When the girls awaken, they learn that the nanobots have altered their DNA, giving them superhero powers. Max can conceal herself at will, Chloe’s hair can form into whatever she needs, Francesca’s smile emits a beam of light, and Tania’s nails fire from her fingers like bullets. Unknown to them, Tesa, a jealous corporate assistant, has also been exposed to the Superheroine cosmetic and threatens to use her newfound powers to threaten Angel City and become America’s top model…

“Supermodels!” has already been called, “Original and amazing” by the Fan Film Boyz Podcast and can be purchased on e-book or paperback from Amazon, Barnes & Noble, or the 120pages Shop, where you can also check out the five other screenplays that are being published as the first phase of this exciting endeavor.

To request an advanced copy or to speak with the author, email Noura.jost@gmail.com

ABOUT 120 PAGES: 120pages believes that a screenplay is a work of art, not just a blueprint for film. The publisher recognizes the screenwriter as an artist and strive to provide exposure and financial support through various mediums, distributions channels, and revenue models.