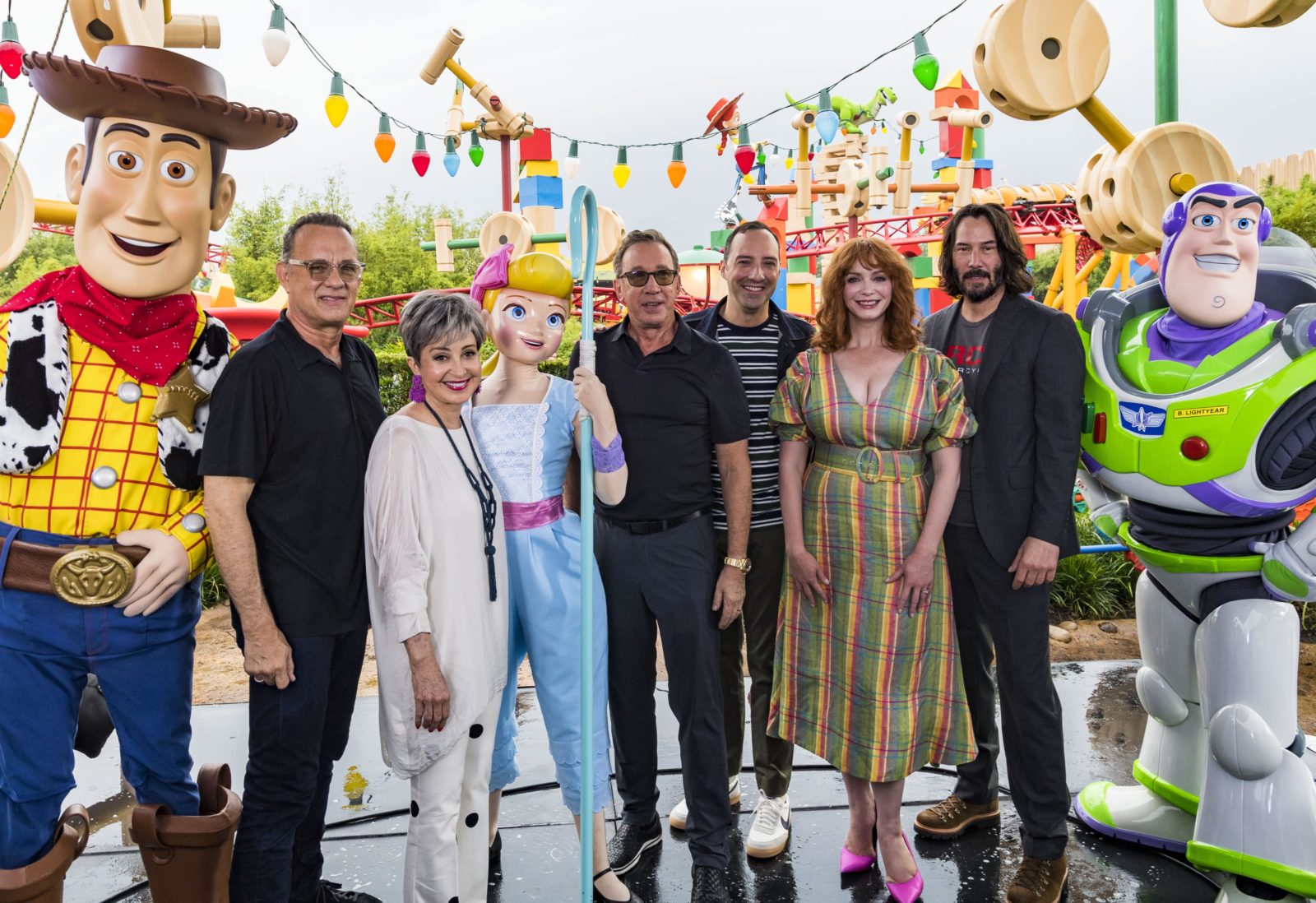 On June 8, Disney Studios held a press conference followed by interviews with the cast of the upcoming film Toy Story 4.

We watched the film before getting a chance to speak with everyone and ask questions at the press conference. Here are some of the things we found out.

Allen joked about ejecting Woody from the Toy Story franchise.

Tim Allen started out with a joke about the new film. He said that he was glad that Pixar finally booted Hanks’ character, Woody. The joke was on him though when Reeves broke the news that Woody was indeed in the film. The actor directed Allan’s attention to the screen behind them where the film logo, featuring Woody, was displayed.

One person asked about Buzz’s hair under that purple Star Command cap.

Allen briefly joked that the character has “ropecia” a hair loss condition that plagues robotic toys. He then said that Buzz really has “ a beautiful head of hair and a man bun” under that cap.

In my interview with Potts, we talked about how the women are at the forefront of this Toy Story Film.

Potts said, “The women are not waiting anymore.” Her words perfectly describe the arc of the relationship between Woody and Bo and how it works in this film. (I can’t say more, #spoilers.)

Hendricks told everyone that Gabby Gabby is not really a villain.

This is despite her godfather-like hold on the antique mall and the power she wields to hunt down Woody. According to Hendricks, you will see in the movie that Gabby Gabby’s sinister behavior has a modus operandi. So, after watching the film, you will probably agree that the doll is not a villain.

Reeves plays the hypersensitive Duke Caboom, a character some may call a “crybaby”.

However, the actor doesn’t seem to like the term much. “What’s wrong with that?” he asked the crowd during the press conference. Reeves did admit that the character had crybaby tendencies.

The team that animated Duke Caboom was 100% Canadian.

Not everyone is allowed to ad lib on the Toy Story 4 team.

Allen told the crowd that the Pixar creators didn’t like when he ad-libs because his comedy is not for the Buzz Lightyear audience. However, they do listen when Allan says, “Buzz wouldn’t say that,” to dialogue that is inauthentic to the character.

Hendricks feels close to Gabby Gabby because like her Benson, Hendricks also has a dummy.

She told the crowd that she always wanted a Charlie McCarty ventriloquist doll and had just acquired one for the first time when she got the call to audition for Toy Story 4.

Hanks says that the vocal gymnastics he must do to be Woody makes his diaphragm hurt after a long day of recording.

During the press conference, Hanks revealed that the cast was not allowed to talk about certain things, including the film’s ending.

Hanks took out a folded wad of papers and read from them each time someone asked a question pertaining to the end of the film.

The actors usually do their voice work solo in the recording booths.

However, they did make some exceptions. Hanks and Potts were together to record many of their shared scenes. Key and Peele recorded together as well. Allan did say that he was a bit upset that he and Hank were not recording together for this film.

Hale revealed that he is still processing the idea of being such a popular character in an iconic film series.

He said that he had imposter syndrome and was always waiting for someone to say he’s not supposed to be doing any of this.

I asked Hendricks if the character she plays in the NBC show Good Girls, Beth, would be friends with Gabby Gabby.

She said the two would get along. They do have a lot in common.

Hale announced that Forky is getting his own television show, Ask Forky, on the upcoming Disney streaming app.

Forky will partner with other Toy Story characters to answer questions that are weird but very interesting.