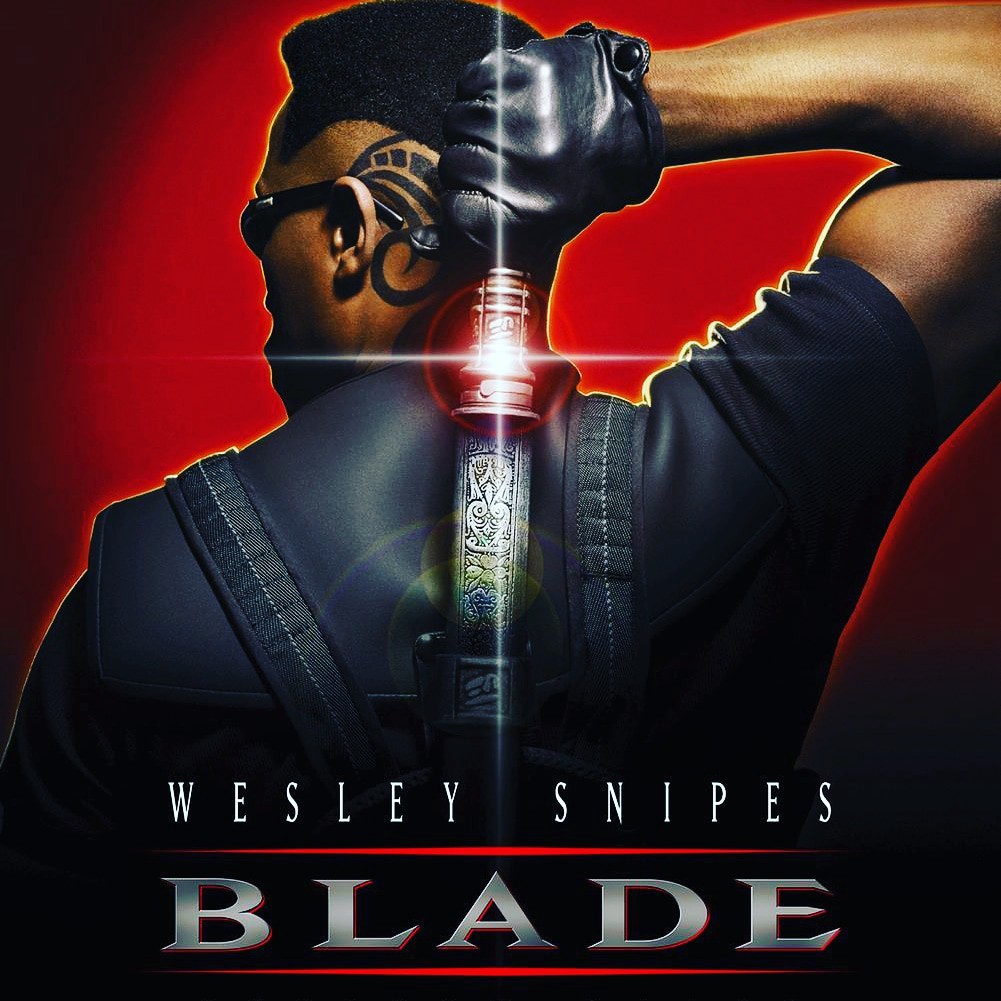 Meet Blade, the samurai sword-wielding half-human half-vampire “daywalker” assassin who was one of the first Marvel comic book adaptations to make it onscreen. Featuring Wesley Snipes as the titular character, this dark telling set a new backdrop for superhero narratives, a legacy we can trace today to Black Panther, Luke Cage, Black Lightning, and more.

There are many firsts in Blade. He is the first Black movie superhero. Blade is the first film to include a website puzzle tie-in that deepened the story. It was also one of the first portrayals of the underground 90s American rave scene. That culture has since morphed into the festival circuits and EDM events that eventually took over what we once called “clubbing”. Even 20 years later, Blade is still singularly iconic. 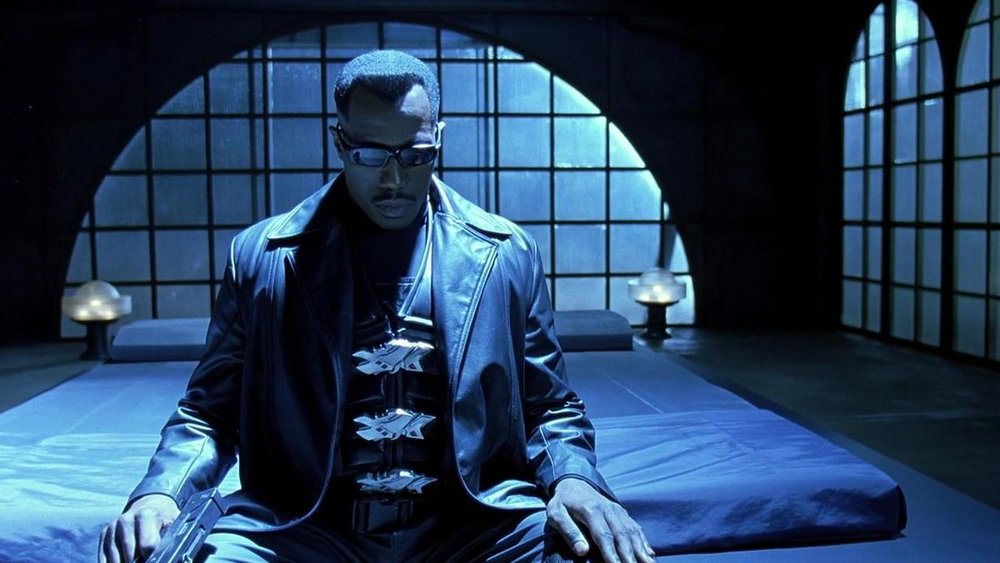 Blade’s mother (Sanaa Lathan) was bitten by a vampire just before giving birth. The bite created a genetic anomaly in Blade. He has all the vampire’s strength but also a core humanity they lack as well as the ability to go out during the day. He uses his power to exterminate vampires, penance for the guilt he feels for being sort of one of them. Unfortunately, his dark gift comes with a terrible price: he cannot escape the vampire bloodlust and must take regular doses of a serum in order to keep those pangs at bay.

As a Black man, Blade began life marginalized. As a Black human-vampire hybrid, he is further on the margins of both human and vampire societies. His hybridity is powerful, but Blade has no place except on his own. His nemesis Deacon Frost (Stephen Dorff) is similarly on the fringes of vampire society. Having been bitten instead of born vampire, Frost is constantly looking to prove his worth to the Vampire Council led by Gitano Dragonetti (Udo Kier). Frost is also looking to crack the code of an ancient vampire bible with a ritual to bring about the human apocalypse and the rise of the reign of vampires.

These old versus new world orders clash when Frost finally deciphers the La Magra ritual, while Blade also tries to help hematologist Karen Jensen (N’Bushe Wright) find a cure for the vampire disease. Continuing its biblical metaphor, Blade turns out to be the chosen one prophesied by the ancient text who will bring about the vampire takeover of the planet. Like a Black vampire Jesus, Blade’s blood is the key ingredient to unlock the power of the beast La Magra, whose next vessel will be Deacon Frost.

Blade was one of the first good examples of positive representation, and in particular Black inclusion. Seeing a sci-fi horror movie with such a stellar cast of color was a first for me in 1998, and in some ways it still comes as a surprise now 20 years later. The most recent UCLA Anenberg study found in 2017 that 70% of speaking roles in films were white actors. Even by today’s standards, Blade is an outlier for representation and diversity.

But the film doesn’t stop there with its allegory-heavy hybrid human-vampire daywalker. There are so many ways to interpret Blade’s struggle with his genetic makeup and broader identity. He is a man stuck between worlds. Frances Gateward interprets Blade as a critique on miscegenation in “Daywalkin’ Night Stalkin’ Bloodsuckas: Black Vampires in Contemporary Film”. She equates vampirism to whiteness (even though the vampires in the film are indeed diverse), and in particular because of Frost’s desire for world domination through genocide.

As someone who is mixed race, Blade was one of the first on-screen appearances of a “mixie” like me. Being half white and half Sri Lankan (both Tamil and Sinhala), but raised all over Asia and Africa during my childhood, like Blade I also existed on the margins of the margins. I relate to his identity crises, and his struggle to come to terms with the totality of who he is. Monsters as metaphors have always resonated with me. Being a perpetual “Other” no matter where I go in the world, I couldn’t help but relate with on-screen outsiders like Blade searching for their role and their place.

By the end of this film, Blade comes to terms with himself and finds a kind of peace. He stops trying to force himself into one or the other group, and instead accepts both his faults and gifts for what they are. He stops letting his identity issues and guilt about who he is — in particular that side he considers monstrous and hateful— control his life. I can finally say that 20 years later, so have I. This is, in part, thanks to witnessing Blade’s personal social and cultural negotiations for all these years, from the first film and beyond. Decolonization is a process, and for some it takes longer than others.

Long Live the Legend of Blade

What’s most impressive about Blade though is how well it has held up over the years, and even under the sometimes-harsh glare of the high-definition TV. The blood rave is as creepy and thrilling as ever. The fight scenes a beautiful flurry of sound and martial arts. The high-speed chases and comic-book-esque camera tricks only look crisper. In so many ways Blade was made for today: for today’s politics, for today’s television screens, and for today’s marginalized audiences. We now have platforms to share our own experiences as Others and outsiders.

In 20 more years, Blade will still be as socially and culturally relevant as it’s been all this time. Hopefully by then Hollywood will have had time to catch up with Blade‘s equitable representation and inclusion.

You can stream Blade on Netflix.