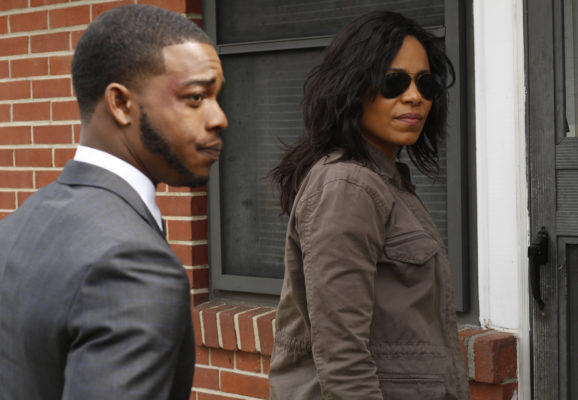 We live in troubled times. A spoiled man child has been coronated to the most powerful position in the world. Special interest owns our politicians who in turn give scant attention to the people they are elected to serve. Our planet is warming at an alarming rate; our urban schools are suffering from neglect and profiteering; and our infrastructure is crumbling. The citizens are left voiceless as they see no escape and no help coming. But the one thing that make this assault on our sensibilities bearable is art. Art is our friend, our lover, our confidante, our teacher. It raises our consciousness, promotes community, and inspires us. In short, it makes us more human. Enter Shots Fired.

Shots Fired is the latest joint from Executive Producing and Writing team, Gina Prince-Bythewood and Reggie Rock Bythewood. It deconstructs two separate police shootings of unarmed kids, one white, one black. Already tense racial tensions are further inflamed after the mayor calls in the DOJ to investigate the shooting of the white kid.

I had the pleasure of screening the first episode and I wasn’t ready. While watching it, I felt the same rage and helplessness I felt after the deaths of Tamir Rice, Trayvon Martin, and Sandra Bland. So many have been murdered over the years, it’s hard not to become desensitized. And if the first episode is any indication, Shots Fired honors our fallen brothers and sisters. It also shows the insular and circle-the-wagon culture of the police. The striking visuals and reality of a mostly white police force policing mostly black people, the distrust and fear of communities of color against those chosen to protect them.

There is a hint of the prison industrial complex that needs more and more black bodies to maintain profitability. Shots Fired handles all this deftly while also managing to differentiate between being anti-police and anti-justice. Thanks to great writing and incredible performances Shots Fired delivers.

There are so many standout performances to choose from, let’s start with Aisha Hinds dominating performance as Rev. Janae James. The vulnerability and strength of Jill Hennessy’s Alicia Carr. Mack Wilds’ brilliance in playing a frustrated and abandoned officer trying to balance two worlds and left with no home or community. But this series will rise or fall on the performances of Sanaa Lathan and Stephan James. It’s in good hands. Sanaa plays a damaged and at times self-destructive Investigator who is as beautiful as she is intimidating.

Sanaa is at the top of her game. She looks at home throwing down shots with the good ol’ boys, showing tenderness as a mother that grounds her, and displaying a sexual confidence and swagger that makes me blush. Stephan plays opposite her, and anyone who has played sports is already familiar with him. He’s the Quarterback of the football team who got a 36 on his ACTs. He’s the arrogant overachiever who thinks he’s the smartest guy in the room. Stephan nails it by showing some self-doubt and humbleness in his self-reflective moments that hints at his character’s arc. And when they’re on screen together playing mental chess games with each other they are magnetic and it is must-see TV.

Shots Fired is the latest piece in a new tapestry that challenges the status quo and shows an imperfect nation falling short of it’s promises to it’s more vulnerable citizens. Mr. Bythewood had the TALK with his grandfather and remnants of that talk are seen when Lathan’s character, Detective Ashe is stopped by the police. Her badge and status don’t protect her.

There are levels to privilege and the police that stopped Det. Ashe let her know she is confused if she thinks otherwise. That’s the talk every black parent has with their child. Mrs. Bythewood who is the mother of two sons leaves her imprint as well. You feel it as Shameeka gazes at her son while he studies or walks him to the bus stop demanding a kiss. Her life is controlled by a fear that is every parent’s worst nightmare.

And Mrs. Bythewood’s involvement in this project should come as no surprise. Black women are leading the way in today’s movement be it Michelle Alexander’s The New Jim Crow, Ava DuVernay’s 13TH, and now Shots Fired. But if you have been paying attention (see the demographic breakdown of the latest presidential election) black women ‘showing the way’ is nothing new. The fact that a lot of black women’s contributions may have been invisible or gone unnoticed during the Civil Rights movement says more about who is writing the history books than anything else. But make no mistake, the movement of today is being led by black women on all fronts and they are no longer hidden figures. Do yourself a favor, watch Shots Fired this spring and join the movement. Stay Woke.

You can catch Shots Fired starting March 22nd on your local Fox Station.

Thelonious Legend is a Science Fiction novelist and blogger. He is host of The Blerd Book Club on Goodreads, co-host of Black Comics Chat and periodically provides reviews to Black Girl Nerds.