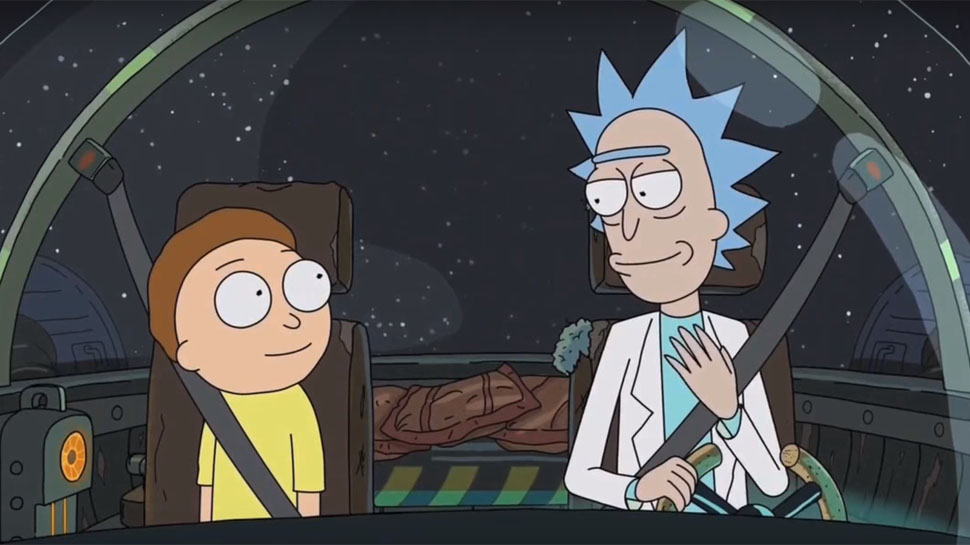 Hmm, is this episode the first time Rick and Morty’s done the “evil twin” trope? I think it is. Regardless, it’s also one of those interesting episodes where we get to find out more about Morty’s dark side.

It opens with Morty at his locker listening to Jessica talk to her friends about breaking up with Brad. (Remember her? Where’s she been?) She’s now single and ready to mingle! He timidly approaches the girls and gets ready to ask her out but Rick appears literally out of nowhere and drags him on a quest that he promises will take twenty minutes but ends up being 6 days, and a traumatic enough experience that they both break down in the ship after, Morty sobbing, Rick screaming “I can’t do this anymore!”

Rick decides it’s time for a vacation and they head to a space spa. It’s perfectly relaxing — until they enter a machine that’s supposed to remove all the toxicity out of your body. They enter, there’s an explosion, and we see them in some kind of muddy gooey swamp land, fighting off other swamp monsters and trying to find out how to get back. Then, Rick has the sudden realization that THEY’RE not the real Rick and Morty, they’re the toxic parts that were subtracted from their bodies. The real Rick and Morty leave the spa feeling refreshed, relaxed, and literally brand new. They even have a nice bonding moment in the ship where Rick puts aside his ego and lets him know how proud he is of him.

It’s easy for him to do this because, as we watch Toxic Rick and Toxic Morty try to escape that strange swamp dimension they’re trapped in, Toxic Rick has all of Rick’s narcissism and rage, and Toxic Morty has all of Morty’s insecurities and self-loathing. So in the real world, Rick becomes kinder, and Morty becomes confident and aggressive, attaining popularity and even scoring a date with Jessica. Morty’s enjoying running the show, and he doesn’t like it when Rick gently pulls him aside and tells him he’s been receiving messages on his phone from that strange swamp dimension and figured out that toxic versions of themselves exist and need help escaping. Rick wants to rescue them, but Morty breaks Rick’s phone and convinces him to ignore it.

Morty loves his new life and doesn’t let anything get in the way of his new happiness, even when Jessica tells him she doesn’t like the new him and leaves their date. Instead, he just picks up a woman named Stacy at the bar and talks her into going home with him, whereupon he discovers Rick has found a way to contact Toxic Rick and Toxic Morty. Rick wants to merge with them and become normal again; Morty doesn’t want to have anything to do with them. They fight, and somehow Toxic Rick and Toxic Morty gets transported to this world and Stacy gets sent to their dimension in their place. Rick and Toxic Rick have an interesting showdown that results in half the house being torn apart and Summer and Beth watching two naked Ricks beat the hell out of each other before Toxic Rick grabs Toxic Morty and runs off, intent on turning the world as toxic as they are.

Rick and Morty begin to realize that even though the spa subtracted “toxicity” from their bodies, the term is subjective, and they have very different ideas of what the toxic parts of their personality might be. So while Toxic Rick begins the process of turning the world toxic, Rick and Morty show up and Rick starts shooting Toxic Morty, explaining that that’s the only leverage he has. Because one of the things he considers “toxic” about himself is his attachment to Morty, right now Toxic Rick is the only one who cares about whether he lives or dies. It’s a fascinating revelation. (And when you watch the episode again you realize that new Rick is nicer than old Rick but he’s actually a lot more detached. It’s a genius set up.) So Rick keeps shooting Toxic Morty until Toxic Rick finally bends and merges with him.

But when it’s time for Morty to merge with Toxic Morty, he flies his ass up on outta there. It’s another fascinating revelation — Morty had considered compassion and his conscious to be “toxic,” so he’s actually the evil twin, not Toxic Morty. He runs away and spends the next three weeks as a rising star stockbroker a la Wolf of Wall Street, a beautiful woman living in his apt and everything. But he ends up letting Rick track him down and merge him with Toxic Morty, which tells us he was getting tired of living that life and maybe wanted to be normal again. It also reminds us he’s much smarter and more complicated than Rick gives him credit for.

How close is Morty to becoming a full blown psychopath? Maybe he’s more like Rick than we thought…

Review: ‘Rick and Morty’ Season Six May Be One of Its Best