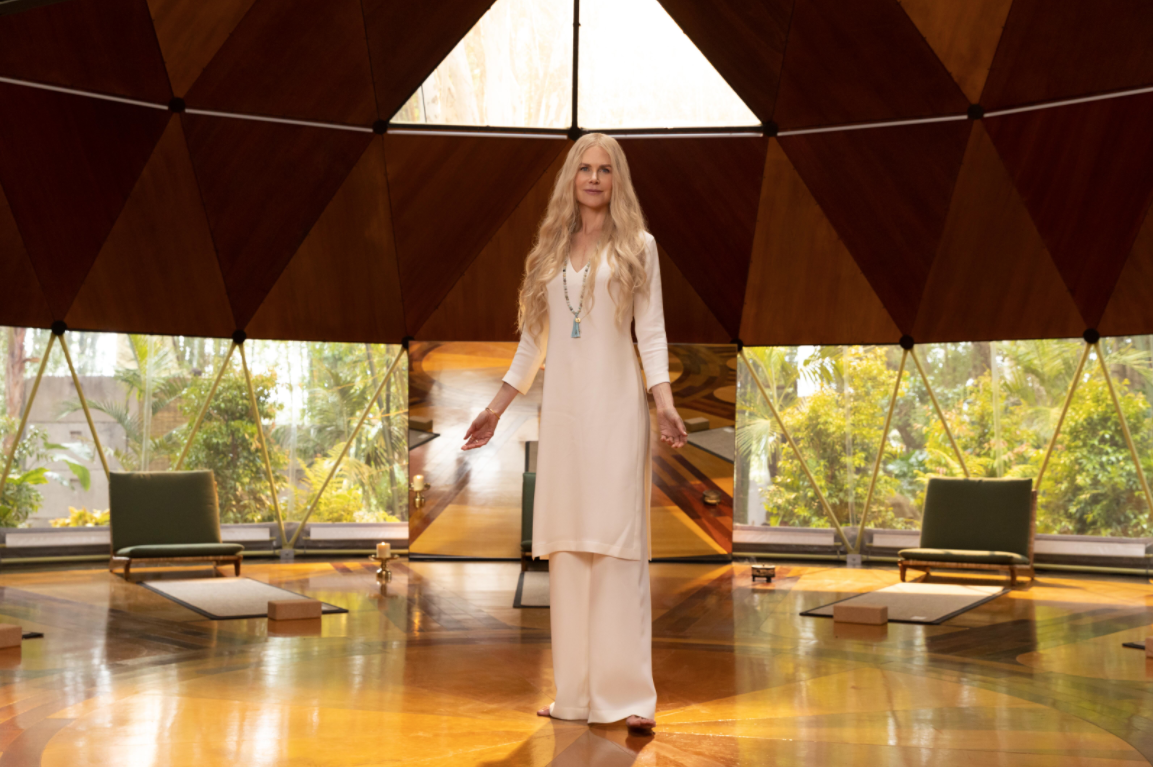 Even Nicole Kidman admitted that Hulu’s new streaming series Nine Perfect Strangers is “trippy” at last week’s Television Critics Association panel. Of course, trippy can be good or bad depending on the situation.

Kidman plays Masha, a very tall, very thin Russian New Age-ish guru who runs the mysterious Tranquillem health resort. The “nine” are people she has handpicked to spend a week getting healthy physically and mentally. From the beginning, we know that these people are stressed to the max and in need of some TLC — but just how much?

Anyway, the nine are Francis (Melissa McCarthy), a relatively successful romance author who’s trying to get over being bilked out of a fortune from an online grifter boyfriend; Napoleon Marconi (Michael Shannon), his wife Heather (Asher Keddie), and daughter Zoe (Grace Van Patten), all of whom are struggling with the trauma of their son and brother’s suicide; Ben (Melvin Gregg) and Jessica Chandler (Samara Weaving), a young, attractive couple who seem to have it all except for their eroding marriage; Carmel (Regina Hall), a recent divorcee with a lot of self-esteem and anger issues; Lars (Luke Evans), a negative sourpuss who may be hiding a secret; and Tony (Bobby Cannavale), a former pro-football star turned prescription pill addict who is wondering how he ever decided to come to the resort in the first place.

And there’s the staff, consisting of Yao (Manny Jacinto), Delilah (Tiffany Boone), and Glory (Zoe Tarekes), who also seem to have their own problems with and without Masha (or caused by Masha?).

First, the problem for viewers may be that, after the characters arrive and get the tour and rules from Masha, not much happens. Pretty soon it looks like one of those voyeuristic escapism destination movies where one can almost guess who’s going to get along with who, hook up with who, etc. So we wait because at this point it’s looking more like The Love Boat than Fantasy Island.

There are scenes at the pool, inside the spacious resort, while gathering for colorful and fruity low-calorie breakfasts, and while walking around the lush grounds. There is some witty banter, along with a few slightly humorous scenes (humor is not that generous). Sure, Masha’s more tightly wound than she pretends to be and has a past she’d like to forget. Also, it’s clear that the Marconis are still grieving and Francis and Carmela are both angry in different ways, but what else?

By the time the characters and anyone watching finds out the nine people are merely guinea pigs for Masha’s mad scientist ambitions and that (SPOILER ALERT!) they are being drugged, they don’t seem to mind and we may not care.

Nine Perfect Strangers with Kidman in the lead has a stellar cast of talented actors, but there’s less going on with this story than the trailer (edited as a scary story) implies. It could simply be more about the choice of property. The series is based on the book by Australian bestselling author, Liane Moriarty (who’s also one of the producers). McCarthy is a producer, as is Kidman’s Blossom Films and producer Bruna Papadrea’s Made Up Stories. David E. Kelley is head writer and showrunner.

Second, all must have felt they had a great vehicle but in this case, it appears hard to translate what is compelling in the book to the screen. Questions about this may include: What was life like for the Marconis before their son’s suicide? Is there more there for all the characters to learn about themselves other than just their own body’s reactions to the herbal concoctions that Masha’s mashing creates? While some of the getting high provide some slapstick visuals, scenes go on far too long and do not, again, drive that slow-moving plot along.

Third, the investment is somewhat lacking. While viewers will find that there are characters to root for, including the romance writer, football player, couple grieving their kid, and even members of the staff, scenes are very uneven, switching to something completely unrelated and then on to something else, providing little time for connection.

What’s good is that all the characters from the book remain in the series. McCarthy is funny and heartbreaking as the scorned Francis, and while Kidman goes in and out of her Russian accent, she still manages to play well a character that is not completely a villain or a victim. Hall loses herself in the role of a woman near a nervous breakdown. Shannon gets to lighten up while Boone, Weaving, and relative newcomer Van Patten all bring layers to youthful characters facing 21st-century problems.

But if you like your TV well defined within a certain genre or fast-moving plots, this simply isn’t it.