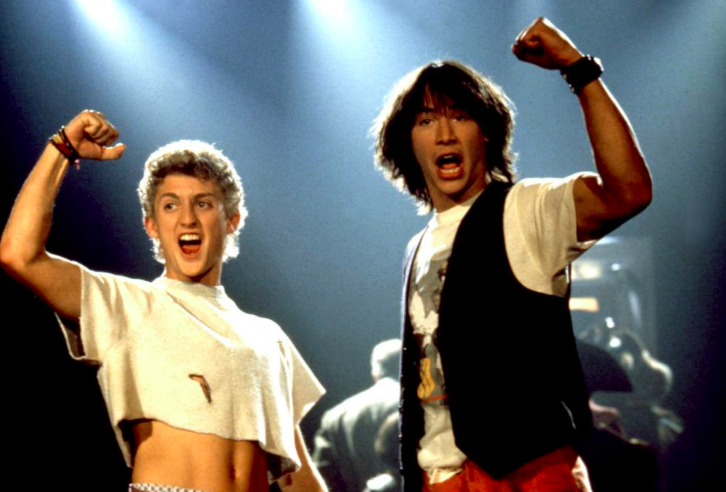 On February 17, 1989 the world became a more excellent place thanks to Keanu Reeves and Alex Winters’ turns as hapless valley boys in Bill and Ted’s Excellent Adventure. Ted “Theodore” Logan (Reeves) and Bill Preston, Esquire (Winters) are about to fail senior history most heinously unless they crush their oral report. Ted’s abusive cop father Captain Logan (Hal Landon Jr.) pre-empts Ted’s failure by enrolling him in military school in Alaska.

The potential split of Bill and Ted’s friendship in this cruel way sends out a massive shockwave into the universe that portends the apocalypse. Rufus (George Carlin) is a most righteous emissary from the future sent back in time to help make sure Bill and Ted pass their history presentation, for the benefit of the world.

With the assistance of Rufus’ time-traveling phone booth — a sweet nod to Doctor Who’s TARDIS — Bill and Ted go on a bodacious journey from San Dimas into history as they collect historical figures for their final presentation. From ancient Greece to the American wild west, Bill and Ted kidnap Socrates, Napoleon, Billy the Kid, Genghis Khan, Joan of Arc, and Beethoven, bringing them back to San Dimas as time runs out for their presentation.

But it isn’t just the Circle K where strange things are afoot in Bill and Ted’s Excellent Adventure. While this absurd film holds up surprisingly well in HD, the remastered visuals don’t temper some of the problematic sexism and homophobia. Ted’s dad isn’t the only creepy dude in this story. Bill’s father (J. Patrick McNamara) has married Missy (Amy Stoch), a former classmate of Bill and Ted’s who is only three years older than them. Gnarly. And while the two princesses Joanna (Diane Franklin) and Elizabeth (Kimberley Kates) eventually get some agency by the sequel, in Excellent Adventure they are basically used as props and eventually given to Bill and Ted as gifts for completing their mission and saving the world. That’s a totally egregious violation of women’s rights, man.

It would also be a major bummer of an oversight if I don’t mention the most unfortunate homophobic language uttered by our heroes Bill and Ted after Ted’s death scare. For most of the movie, Bill and Ted appear to be performing non-toxic masculinity. They have emotional intimacy and their physical contact is regular and nurturing. When Bill thinks Ted’s dead (heh heh) he rightfully freaks out. When Ted isn’t dead they embrace as best friends who truly love and care about each other. And then they drop the other f-word right after. This is a reminder that even though Bill and Ted seem to be innocent and almost completely without guile, they are still enmeshed in the kind of toxic masculinity demonstrated by their dickhead dads. Bill and Ted can’t help but be products of their time, just as the historical figures they bring into the present can’t help but be products of theirs too.

These issues do inject a stain on Bill and Ted’s legacy that might make it difficult for some to revisit now. Part of me wishes they’d at least edit out the homophobic slur. I can spin it so it makes sense in context, but it’s quite simply unnecessary and would only improve the film’s longevity without it. Thankfully, there is some great representation in the first installment of Bill and Ted’s adventures to make up for these other lapses in writing. Bill and Ted’s history teacher Mr. Ryan (Bernie Casey) as well as the supreme of the Three Most Important Important People in the World (Clarence Clemons) are both Black men, and are not presented in any kind of stereotype or caricature, unlike just about everyone else in the film. This aspect was rather ahead of its time, and for it I’m grateful. Most righteous indeed.

But let’s also not forget that Bill and Ted’s Excellent Adventure is absolutely absurd and still funny as hell. Reeves and Winters have remarkable chemistry together. In a world as dark as ours has become, seeing Bill and Ted with their beaming smiles and air guitar nonsense feels like rays of light and hope. Bill and Ted’s Excellent Adventure is a reminder all these 30 years later that there is a time and place for absolute silliness. The news gets even more triumphant as Keanu Reeves and Alex Winters are teaming up once again for a third installment of the franchise, Bill and Ted Face the Music, being released in August 2020. Until then, be excellent to each other. And party on, dudes.