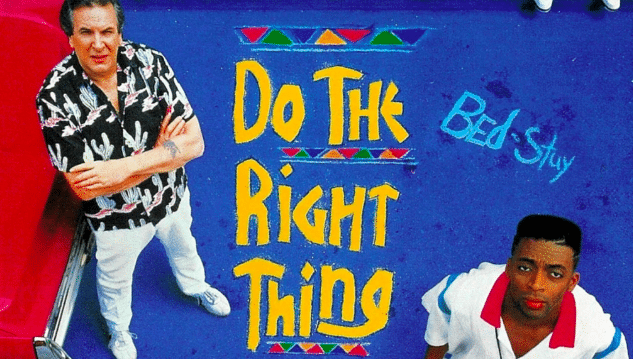 It’s not just one of the hottest days on record in Brooklyn, with weather conditions amping up emotions and trying everyone’s patience.

It’s also the day that neighborhood eccentric Buggin’ Out (Giancarlo Esposito) has finally had it with the local haunt Sal’s Famous Pizzeria only featuring white folks on its walls in a predominantly Black neighborhood.

Everyone knows that Pino (John Turturro), son of Sal (Danny Aiello), is a flaming racist who uses the n-word with abandon. But Sal is a decent guy who employs down-and-out folks from the block and pays on time. So Buggin’ lives up to his name and hits the roof when Sal refuses to put any Black folks up on his wall of fame. Announcing a boycott of the pizza shop, he then begins promoting it up and down the street. From that one small confrontation, Spike Lee’s masterpiece about race relations in America Do the Right Thing quietly and steadily ramps up to its explosive and prophetic conclusion. 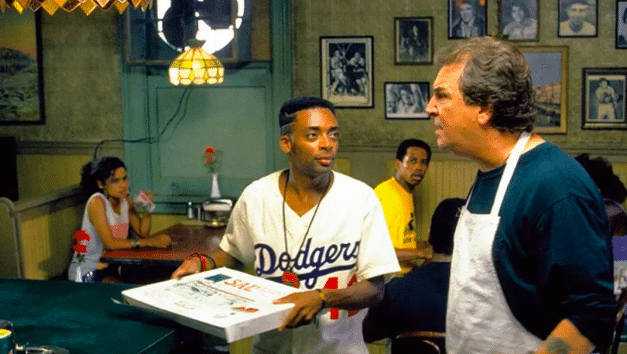 Mookie (Spike Lee) delivers pizzas for Sal and encourages Buggin’ to chill for once. It’s Sal’s place and he can decorate it as he sees fit. But Buggin’ refuses to let it go even though most people in the neighborhood agree with Mookie — that is, until Radio Raheem (Bill Nunn) and Buggin’ cross paths. Raheem had his own encounter with Sal earlier on this sweltering day when he refused to turn off his titular radio blasting Public Enemy upon entering Sal’s establishment. Radio Raheem joins forces with Buggin’ to teach Sal a lesson, who in his frustration, begins screaming racial slurs and proving himself no better than his racist son Pino. A mob begins forming as Raheem and Sal enter fisticuffs. When the police arrive en masse, Raheem gets choked to death by a cop and the neighborhood riots, destroying Sal’s Famous Pizzeria in retaliation.

But Do the Right Thing is not just about a race riot and the death of a fictional Eric Garner, who was in real life choked to death by police with impunity. The film is also a love letter to Spike Lee’s beloved Brooklyn and its various denizens who are often at odds with each other. Before gentrification changed Brooklyn into a borough that would one day feature in the almost all-white Girls, the neighborhood was a salad bowl of races and ethnicities. It is primarily Black, but with a sizeable Puerto Rican population as well as odds and ends of Italian Americans, Koreans, and that one rude white guy (John Savage) who scuffs Buggin’s new white kicks with his bicycle. Everyone has their own corner, and tensions are high on a good day. The heat wave does nothing positive for neighborhood relations, evident in a montage where actors break the fourth wall and spout a litany of racial slurs directed from one group to another.

As the camera travels up and down the block over the course of the film, we receive almost a time-capsule snapshot of what Brooklyn used to be like. Elders Da Mayor (Ossie Davis) and Sister Mother (Ruby Dee) function as the eyes, ears, and the history of the neighborhood, while radio DJ Mister Señor Love Daddy (Samuel L. Jackson) provides a soundtrack of Black excellence along with Radio Raheem’s “Fight the Power” counterpoint.

The three umbrella guys, ML (Paul Benjamin), Coconut Sid (Frankie Faison), and Sweet Dick Willie (Robin Harris), talk a whole lot of smack while also bringing in a number of truth bombs. ML says that the polar ice caps are melting and one day a whole lot of the world is going to be underwater. Thirty years later and we are watching his prediction unfold with quickening precision. ML also speaks to how institutional and structural racism allow “fresh off the boat” Koreans to open a shop after just a year of living in the USA and Black folks in the neighborhood are denied these opportunities. When Officer Ponte (Miguel Sandoval), a person of color himself, drives by and says, “What a waste,” with such disgust as he surveys the three older gentlemen, it’s a statement that he also clearly applies to the entirety of his current beat. Anti-Blackness is painted in such detailed strokes in Do the Right Thing, that it’s truly horrifying how little has changed on this front, in particular with cops.

The ensemble cast of Do the Right Thing is positively brimming with actors who have gone on to become household names, like Rosie Perez as Tina in her breakout role. Her fierce dance to accompany the opening credits only hints at the various battles to come in the film. She’s so natural on screen, I had to keep reminding myself that this was her first ever movie. 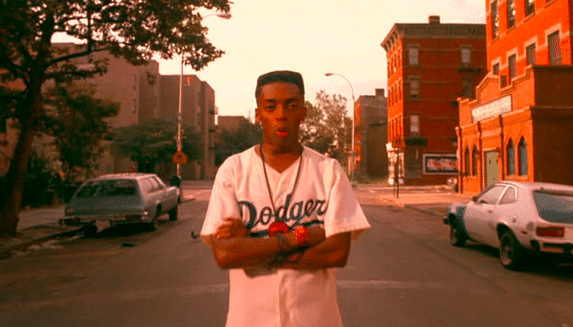 And the moments of foreshadowing in Do the Right Thing are just heart-wrenching. At the beginning of the day when Sal says, “I’m gonna kill someone today,” we (and he) thinks he means one of his sons for their constant harping. At the end of the day, Raheem is dead and Sal’s livelihood destroyed. All because of problematic photos and a radio.

Another gut-twisting moment is when disabled Smiley (Roger Guenveur Smith) tries to sell his upcycled photos of Black heroes to Sal and Pino while on their lunch break. Bully Pino verbally abuses him and chases him off their corner. Sal tries to make nice and buy one, but his gesture is too little too late. If Sal had just gotten involved a minute sooner, he would have had a picture on his wall of Black historical figures and Buggin’ and Raheem wouldn’t have been able to complain about that one particular grievance. It’s positively Shakespearean.

Mookie confronting Pino about his use of racial slurs is another teachable moment in Do the Right Thing. Yes, Mookie has a habit of taking his time with his deliveries. But after Pino racially stereotypes him, Mookie takes him aside to ask him who is his favorite basketball player, rock star, and movie star. Pino responds: Magic Johnson, Prince, and Eddie Murphy. When Mookie tries to point out these are all Black men like him, Pino chillingly says: “They’re not really Black, though. They are more than Black.” This highlights how racist white folks can use their privilege to whitewash POC when it’s convenient for them. The irony is also thick that Italians weren’t considered white up until after the turn of the twentieth century even though they’d been immigrating to the United States for some time.

“Always do the right thing,” Da Mayor says to Mookie. By the end of the film, the right thing for Mookie to do is stop defending the racists he works for and take a stand with his Black neighbors. Through the experience of this one boilerplate day, Mookie has a newfound sense of responsibility for his girlfriend and his kid, as well as his own community. It’s a tough but ultimately beautiful and real arc.

Thirty years later and Do the Right Thing remains an absolute master class in American cinema. In 1989, it was rare to see Black folks simply existing in their spaces, living their lives, loving, struggling, and hoping for more. For those who never saw Blacks as equal or human, this film was an eye-opening mirror of the racist stereotypes and profiling that even liberals and progressives were guilty of.

Unfortunately, along with police brutality, this is sadly another aspect of life in America that has not changed. Even in supposed progressive enclaves like California, we have white women calling the cops on Black people doing normal things in public, because the racism America is built on seems entrenched firmly in bodies and souls. I wish I could have written about how far we’ve come as a country. But 30 years since Do the Right Thing hit cinemas, we have stayed virtually right in place.