In this episode of RWBY, we catch up with Yang and where she’s at on her journey to find the Branwen tribe. Professor Ozpin keeps his word and trains Ruby, who’s not doing as well as she should with hand to hand combat.

We first see Ruby in the midst of sparring with Oscar. Last episode, Ozpin said he would train her and the other students for the impending battle at Haven Academy. Ruby is great with her weapon, but she’s a novice at hand to hand combat. Oscar at this point is relying on muscle memory gained from Ozpin’s knowledge, but doesn’t have any skills acquired from his own knowledge. Ruby has a hard time beating Oscar, despite his lack of training. Oscar is also disappointed in his performance, but the students remind him that it’ll be easier when he discovers his semblance.

A semblance is the innate ability that everyone has on the planet of Remnant. Everyone has a power they’re born with that’s specific to them.

We’re reminded in this scene that Jaune still hasn’t found his semblance. In past seasons, he’s been an inferior fighter but proves to be an excellent battle strategist.

YANG AND THE BRANWEN TRIBE 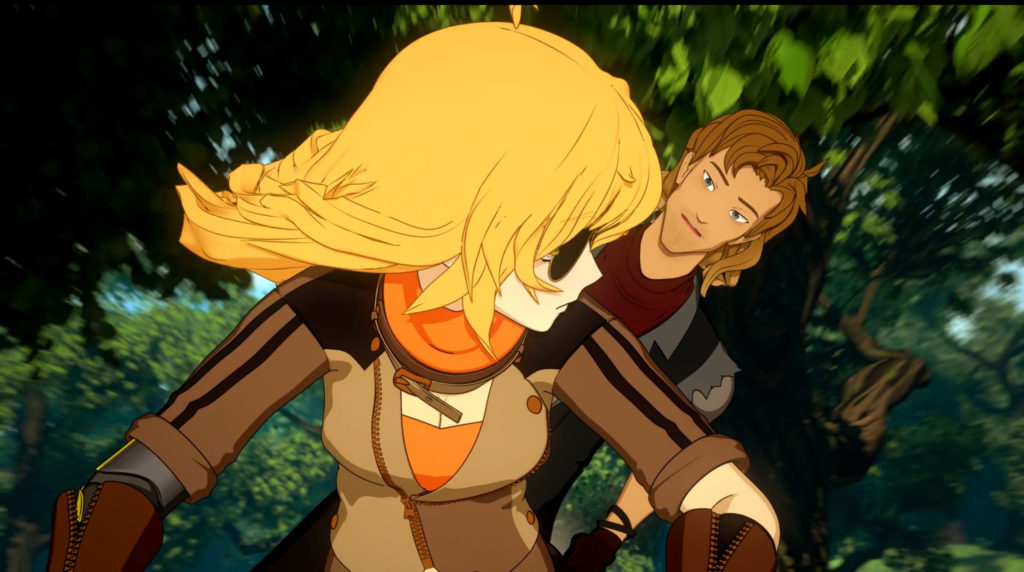 Yang is with the guy she met last episode who agreed to guide her to the Branwen tribe. And of course, he tricks her and leads her into a trap. In the middle of the woods, he has a group of his comrades surround her. Unfortunately for them, Yang can handle herself; even with multiple foes. Quickly, she defeats the whole gang and heads to the Branwen village.

Being Yang, she doesn’t arrive at the village in a subtle manner. Instead, she marches in demanding to see her mother, Raven, leader of the Branwen tribe. (Yang’s mother had abandoned her when she was young to lead the tribe.) Raven downplays Yang’s visit and “grants” her the opportunity to ask any question she wishes. However, Yang’s true reason for visiting is because she wants help finding Ruby. Raven’s semblance allows her to teleport to anyone she bonds with. Raven is connected to Yang, Yang’s father, and Qrow (her brother and Yang’s uncle). Yang knows Ruby is in Mistral but doesn’t know exactly where. It would be useless for her to aimlessly wander Mistral until she runs into her. Yang figures since Qrow is with Ruby, if she can teleport to Qrow then obviously she’ll find Ruby.

Raven is reluctant to help; not because she’s being difficult but because she’s actually trying to protect her daughter. Raven stopped following Ozpin long ago but knows her brother still follows him. She tries to convince Yang not to go to Mistral by letting her know Ozpin is not the man she thinks he is. But Yang is stubborn and insists that Raven takes her to Ruby. Raven, who’s had enough, orders her men to take Yang prisoner, but Yang’s not going down without a fight.

With all of the commotion, Weiss, who’s in the cage nearby, recognizes Yang. Knowing she has back up, she breaks out and joins Yang. Before it gets too out of hand, Vernal (Spring Maiden) calls an end to the confusion. Raven gives in after seeing her daughter’s determination and agrees to take her to Ruby, but not until she first tells her the truth about Ozpin.

When it was first revealed that Ozpin’s soul was inside of Oscar’s body; I figured maybe it was an accident, but on last week’s RWBY we learned Ozpin’s soul has been transferring from body to body. That was a red flag for me. I mean, it’s basically invasion of the body snatcher. But now that Raven says Ozpin is not the man we think he is, I’m convinced. It strikes me as odd that Ozpin didn’t reveal who he truly is. He vaguely explained his dilemma, and we have no idea who he was, what he did, and the specifics of why “he” was cursed. So, I have to side with Yang’s mom. At the moment, I don’t trust Ozpin. Who knows, he could be trying to locate the maidens and the relics for himself to conquer Remnant.