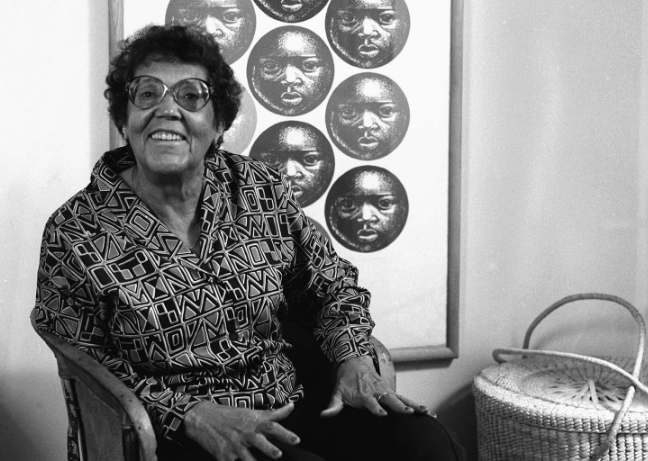 Art is a form of creative expression. Yet for many Black women, art is not only self-expression but self-preservation. It’s a way to communicate to the world the importance of Black women’s existence and presence.

In this article, I present a short history lesson on Black women who have made an impact on Black culture and society through their art. Though you may not read about them in school books, their impact on the art world has transcended into various parts of society.

Is it possible to be a sex symbol and an activist? The answer is yes, as Joyce Bryant has done just that. Known as “The Bronze Bombshell,” she was a sensation in the late 1940s and early 1950s.

Bryant started her career as a fearless and showstopping performer. On stage, she lacked inhibition and confidently showed off her curves in tightly fitted dresses that demonstrated to the world that beauty comes in all shapes, sizes, and colors. As a singer and actress, she had a successful career performing at nightclubs.

Her first gig came to her by chance when she participated in a local impromptu sing-along at a club in Los Angeles. It was from that one $25 gig that she went on to perform on stages across the country, including New York’s La Martinique. Her career led her to do a 118-show tour of the Catskill Mountains hotel circuits.

She even performed in the same show as the illustrious Josephine Baker. It was during that show that Bryant solidified her name as a jaw-dropping performer when she appeared on stage with silver-painted hair and a backless mermaid-style dress.

As riveting as her performances were, she was no exception to the discrimination and inequality Black people faced. During the Jim Crow era, she made an effort to bring people together through her performances. She became one of the first Black singers to perform at Casino Royal in Washington, DC, in 1954. However, her biggest breakthrough performance was in 1952. That year Bryant became the first Black entertainer to perform at a Miami Beach hotel.

After many years of performances, the entertainment lifestyle started to take a toll on her body. Her hair became damaged because of the silver paint, and she began to have problems with her throat. She eventually decided to step away from the limelight and dedicated herself to the church. She lived a long life but passed away at age 95 on November 20, 2022.

As a sculptor, Elizabeth Catlett used her hands to mold beautiful and bold works of art that centered around Black women. Her journey into the art world began in 1935 when she attended Howard University for her BS in art. She continued on and became the first woman to receive a masters in fine arts in sculpture from the University of Iowa.

One of her most well-known sculptures is titled Negro Mother and Child, which won first place in 1940 at the Chicago Negro Exposition.

Catlett began an international career when she moved to Mexico and met her second husband with whom she had three children. While in Mexico she became involved with Taller de Gráfica Popular, also known as TGP, or People’s Graphic Arts Workshop.

Because of the group’s social and politically driven work, the TGP was often observed and investigated by the House Un-American Activities Committee (HUAC) and the US embassy in Mexico. They eventually declared Catlett an “ undesirable alien” and denied her return to the United States. Thus in 1962, she became a Mexican citizen.

Jessica Care Moore is a triple threat in the literary world. As a poet, publisher, and performance artist, she uses the power of her words to influence the world.

Her career first took off when she delivered a memorable performance at the competition It’s Showtime at the Apollo, where this Detroit native won five times in a row. One of her most influential performances is The Black Statue of Liberty

Carrying her passion beyond performance stages, Moore also created the Moore Black Press in 1997. Their mission is to celebrate and uplift cutting-edge Black voices in poetry through their publication. Some of the original poets signed include Danny Simmons, Saul Williams, and the Newark Mayor, Ras Baraka.

Moore’s work extends into philanthropic work with the Jessica Care Moore Foundation as well as her support in the fight against AIDS.

Her list of accomplishments is seemingly never-ending. To add another highlight she is

also the executive producer of Black Girls Rock, a 90-minute show that started in 2004 at the

National Black Arts Festival in Atlanta, Georgia. It is a space for multi-generational performances that highlight women in the rock and roll genre.

Victoria Eugenia Santa Cruz Gamarra was born in Peru and is a testament to using passion and determination to get started. Without any formal education and through learning what was passed down to her from her parents, she co-founded and directed the first Black-owned theater in Peru alongside her brother. She created a space to showcase and produce plays that centered on the conflicts that Afro-Latinas face.

Malató was her first notable play. Released in 1961, it examined the relationship between enslaved people and their oppressors.

She went on to study theater at the university, and one of her greatest accomplishments would be in Mexico City during the Olympics. Her group Teatro y Danzas Negras del Perú was invited to perform. At the time of the performance, the group had only been together for two years. During their performance, they showed the world the vibrancy of Afro-Peruvian dance by performing traditional styles such as zamacueca and landu.

Gamarra had a prosperous career of 53 years — a career that is still celebrated today even after her death on August 30, 2014. Peru’s Ministry of Culture launched the Victoria Santa Cruz Centennial in October 2021. Along with this, the Fulbright Commission in Peru created and launched the Victoria Santa Cruz Fulbright Grant for Afro-Peruvians who are pursuing graduate studies in the United States.

After putting this list together, I felt very inspired. However, more than inspired I am fascinated by the many talents and careers Black women have taken on. These women exemplify how deeply intertwined art and activism are.

R. Kelly? Are You Serious?!