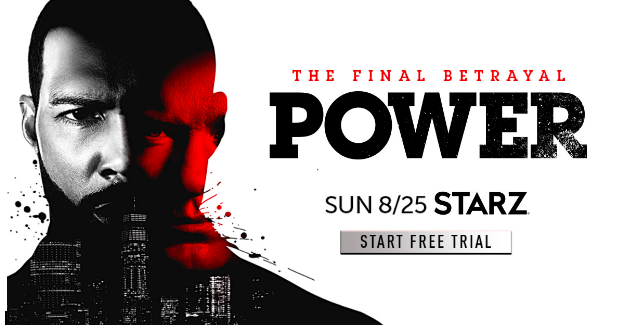 For the last five seasons, we have watched James “Ghost” St. Patrick (Omari Hardwick) fight to get out of the drug-dealing game and become a legitimate businessman.

That was easier said than done as Ghost contended with his street-savvy wife, Tasha (Naturi Naughton), who was all too comfortable with her flashy lifestyle; his ruthless best friend and right-hand man, Tommy Egan (Joseph Sikora); and his mistress, Angela Valdez (Lela Loren), an assistant United States attorney (AUSA). To say that Ghost’s life is complicated is an understatement. Power has returned for its sixth and final season. Here are 5 tips on how to watch the premiere this weekend followed by the top five burning questions we want answered for the show’s last chapter.

1. Start your free trial on STARZ, and binge all five seasons now!

Now to get into the gossip…

1. Angela survived the shooting, now what?

The last time we saw AUSA Valdez, she wasn’t looking too hot. In the final moments of Season 5, Tommy had his sights set on Ghost, but Angela was caught in the crossfire and was shot in the chest as a distraught Ghost held her in his arms. Angela may have not been the intended target, but her shooting hurt Ghost more than any bullet ever could. We catch Angela in the final few seconds of the trailer, so we know she survived. But how will this affect her relationship with Ghost? Let’s not forget the fact that she was suspected of being an accomplice to Ghost’s crimes. How is she going to explain her shooting at the office?

2. What will Ghost and Tommy’s relationship look like in Season 6?

Whether or not Angela survives the shooting, there’s no way Ghost is in the business of forgiving Tommy for taking a shot at his girl. The two have been at odds off and on for the last five seasons, with Ghost’s desire to go straight driving a wedge between him and Tommy who has remained deep in the criminal underworld. With Kanan (Curtis “50 Cent” Jackson) dead, the Jimenez siblings (Ana de la Reguera and Maurice Compte) virtually eliminated, and the threat of the US Attorney’s Office supposedly behind them, Tommy and Ghost don’t have much to contend with but each other. There’s no doubt that Ghost will seek revenge on Tommy for his attempt on Angela’s life, but we all know Tommy is ready and willing to handle for anything that Ghost throws at him. I’m not so certain that the two of them will remain standing at the end of this final season.

You can learn more about Ghost and Tommy’s power struggle here.

3. Will Ghost teach Tariq the game?

As if Ghost didn’t have it hard enough, now he has to deal with the fallout of keeping his son, Tariq (Michael Rainey Jr.), in the dark about his criminal activities. The once promising young man now has a taste for the streets, thanks to his unconventional relationship with Kanan. Hardened by the death of his sister and longing for his father’s approval, Tariq wants nothing more than to be the biggest drug dealer in town. If Ghost won’t teach him, he’ll find someone else who will. The last we saw of Tariq, he aligned himself with Vincent Ragni (Joe Perrino), a powerful drug lord, with the intent of becoming his distributor. Tariq is definitely following in his father’s footsteps. Let’s just hope he doesn’t get himself caught up. Knowing Tariq, he probably will.

“Legal or illegal, man I gotta make it.”

Dre (Rotimi Akinosho), a former mentee of Ghost’s came into his own “power” in the last few seasons. He went from running the streets on Ghost’s behalf to becoming a distro in his own right. Unfortunately, Dre bit off more than he could chew when he double-crossed Ghost and tried to usurp him as the biggest distro in the city and the hottest club owner. His relationship with the Jimenez siblings soured, and Dre had no choice but to become a snitch. He was then transferred into the Witness Protection Program. Who’s to say that he won’t return now that Alicia Jimenez is in federal custody and Diego Jimenez is dead? From the looks of the Season 6 trailer, Cooper Sax (Shane Johnson) is attempting to recruit Dre to take down Ghost. Will Dre reclaim his position at the top of the food chain or will he enjoy the simple life under a new identity?

Okay, so this final question may create a million follow up questions, but how will it all end? There are a ton of loose ends to tie up in this final season. Will Ghost be able to live out his life as a legitimate businessman, or does he have to eliminate his best friend in the process? Will the US Attorney’s Office be able to finally nail down Ghost? Will Tariq’s distrust of Ghost ultimately lead to his father’s demise? What’s up with the laptop that Proctor (Jerry Ferrara) had hidden away? Will it come back to bite Ghost? Will Ghost be able to outmaneuver Councilman Tate (Larenz Tate)? Will Tasha ever know the truth about Terry Silver (Brandon Victor Dixon)? Are Keisha (La La Anthony) and Tommy this generation’s Bonnie and Clyde? Will Angela and Ghost finally get to live happily ever after? We are dying to know the answer to all these questions and more. Tune in Sunday on STARZ with @blackgirlnerds on Twitter!

What are you waiting for? Start your free 7 day trial and binge all 5 seasons NOW!