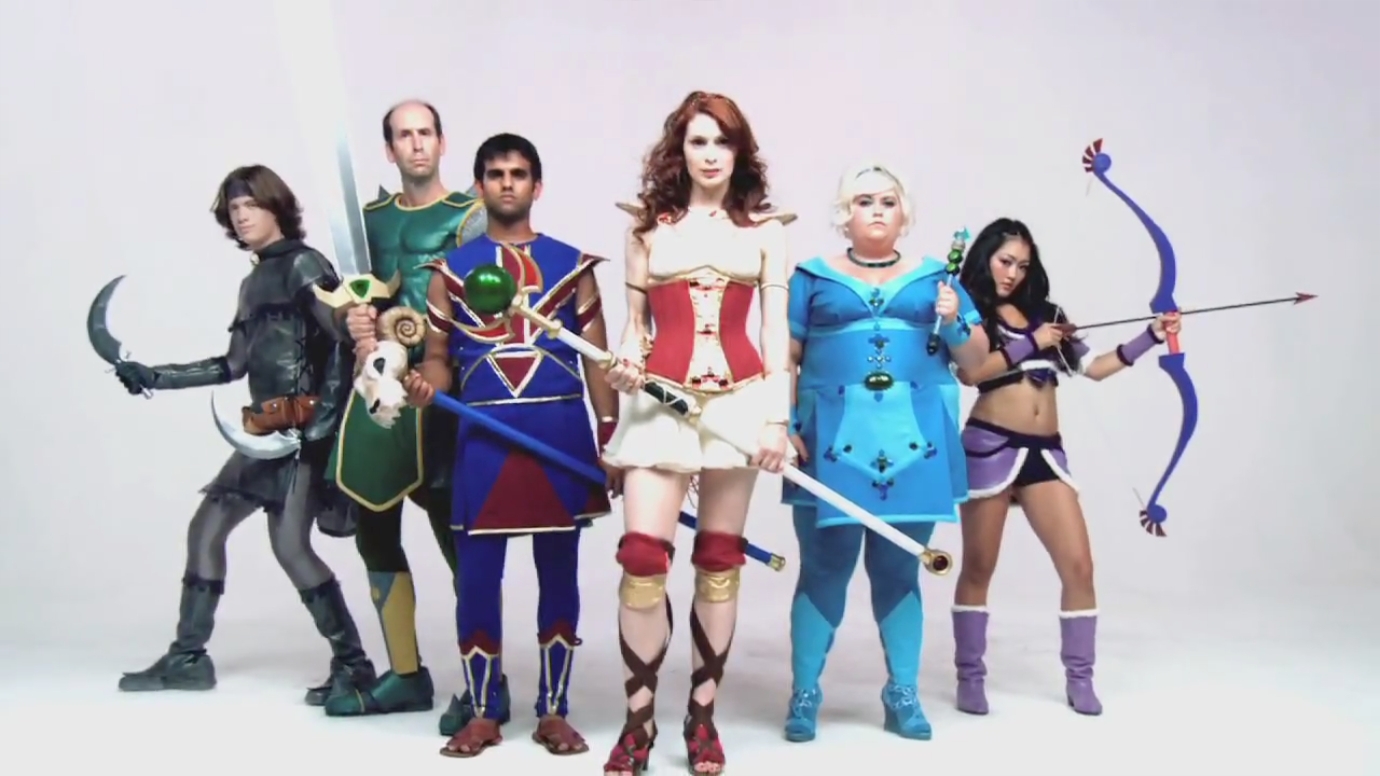 Motherhood can be rough. I mean, yes, it’s magical, rewarding and all that other good stuff, but, if you aren’t careful, you’ll find yourself trapped in the monotony of it all. Each day, an exact replica of the one that came before—diaper changes, nursing, playtime, nap, repeat. Your schedule revolves around your little one, leaving you in a state of perpetual exhaustion. You’ve only managed to scarf down half a bagel and are running on .7 hours of sleep; you barely have the time and energy to breathe—let alone to watch and comprehend a TV show. It’s impossible, right? Wrong! As a new mommy myself, I’m here to tell you that it is possible if you find the right kind of shows. What follows is a list of 5 shows that are entertaining but don’t require your full, undivided attention. So, go ahead, chase after that crawling baby. You won’t be missing much.

Powerless is a great filler show for those looking for a fun, new workplace comedy to watch. It’s perfect for when you’re in-between shows. You know, that awkward moment when you don’t have the time for a new obsession and your brain simply doesn’t have enough cells left to keep up with that mind-bending show you attempted to watch last week before falling asleep 10 minutes in. 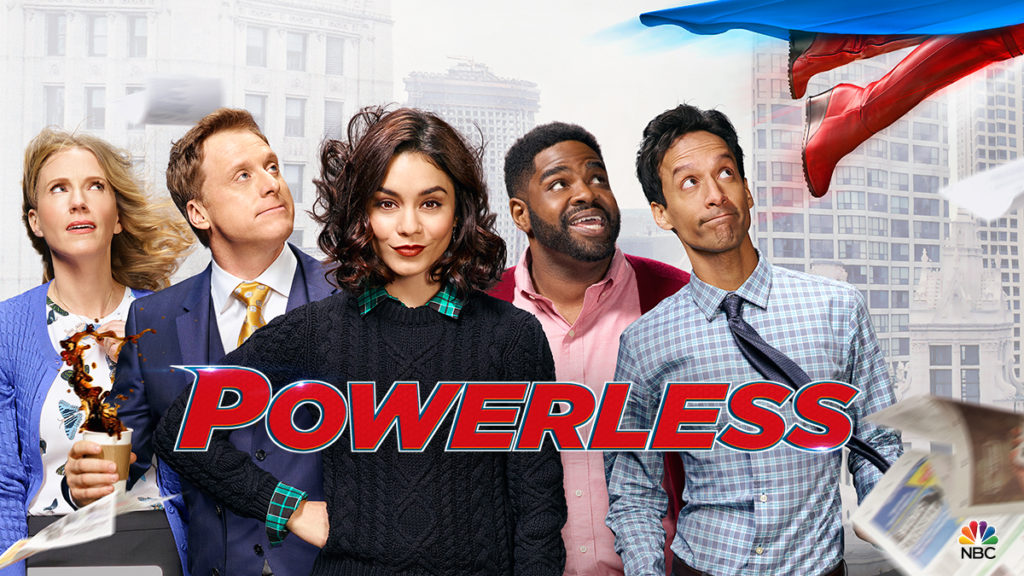 The plot of Powerless is simple enough to follow: Emily Locke, the chipper new director of research and development for Wayne Security, leads a ragtag team of techies as they work to make life a little bit safer for Charm City’s average citizen. Many of whom often find themselves caught in the crosshairs of comically destructive super battles between lesser-known heroes and villains. You don’t have to be a DC nut to enjoy the show’s humor, but, if you are, there is quite a bit of fan service for you (along with obvious and expected references to Bruce Wayne).

This show is great for moms because it is short (21 minutes if you’re streaming it without commercials) and each episode is simple and self-contained. It wouldn’t be the end of the world if mommy brain accidentally made you skip an episode. Similarly, looking away for a minute or two won’t hurt you because the characters are so predictably two-dimensional. You learn rather quickly that they will all act in their best interest no matter the consequences and that any lesson learned will quickly be forgotten by next week’s episode. Yes, even kind-hearted, go-getter Emily meddles in people’s lives, often to their detriment, in order to feel better about herself. However, despite its flaws, the show—and its characters—are getting better each episode. Powerless, like many of its predecessors, hasn’t hit its stride yet, so it’s the perfect time to jump in on the ground floor before it finds its identity.

Remember when we were kids? I’m talking about before your living room floor became a toy minefield. Life was so simple then. Every problem, no matter its size or severity, could be resolved in under 30 minutes with a heartfelt pep talk from Danny Tanner (or Uncle Joey or Jessie). Back then, it was likely that you felt a bit of camaraderie with the Tanner girls. Maybe you could even relate to them on some level (maybe not on the whole “having a super understanding father” level, but some level nonetheless). They were an undeniable part of most people’s childhood. 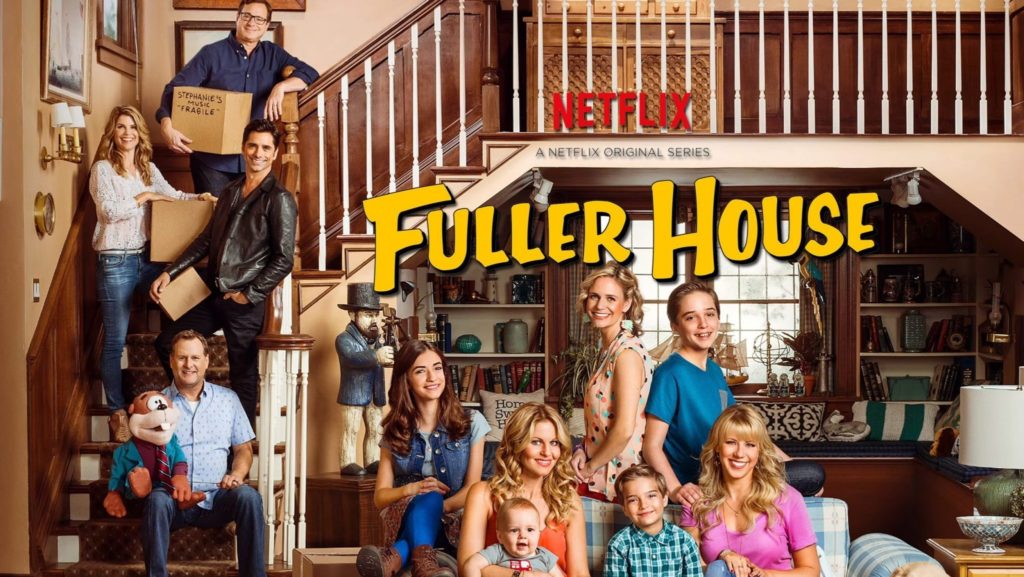 In Fuller House, those same little girls are now all grown up (as are we) and are facing the struggles of adulthood and parenthood, all with a smile and a laugh. Sometimes the best therapy for stress is laughing about it with a friend (or anyone) who can relate. It’s why moments like DJ admitting to Stephanie that she’s turning into her dad are so endearing. We spent so much time rebelling against our parents in our youth only to end up like them as adults. It’s one of many sobering and humorous moments where life comes full circle.

Fuller House is a great show to have on in the background while you’re playing with your baby, cleaning up, or making yourself something to eat. It’s pretty formulaic (the plot is basically a reversal of Full House with DJ taking the place of Danny) and, since most episodes take place inside the house, it’s easy to picture what’s happening just by listening to the dialogue. You’re not missing much. Besides, you know that everything will work itself out before the end credits roll. If only parenthood were really that easy.

That’s right, MST3K is back and better than ever! If you’re unfamiliar with this delightful series, then allow me to break it down for you. In this rendition of MST3K, a couple of mad scientists have kidnapped our host, Jonah, and forced him to watch B movies alongside three witty robots. Okay, so what’s so great about that? Well, have you ever gotten together with a bunch of friends to watch and make fun of bad movies? The jokes you crack together are what we call “riffing.” This is MST3K’s specialty. Basically, you watch a movie while Jonah and his robot buddies make fun of the plot, acting, setting, etc. Nothing is off limits. 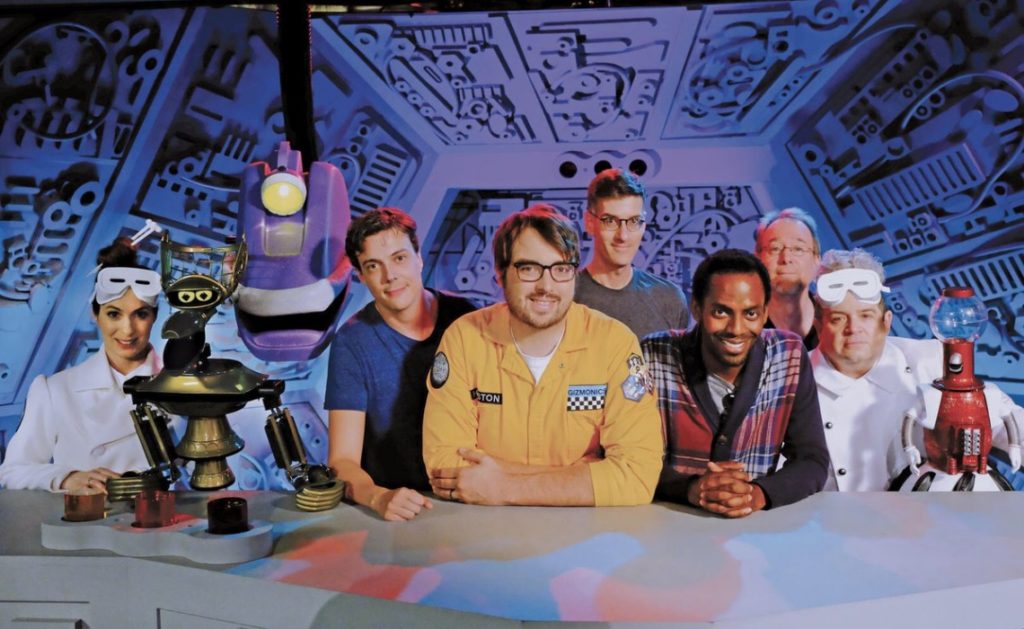 This is a great show to watch if your kid is a good napper (sleeps at least an hour), if you have some energy left after they’ve gone to bed for the night, or if they’re out with a relative or friend. The show is self-contained, which means that you can watch it in any order that you want. Also, considering that all of the movies being riffed are B-movies, there’s less pressure to follow every plot detail. Just find a movie that interests you and let the riffing begin. That’s it. There’s no pressure to finish the entire series in a single sitting. Take your time and go at your own pace.

Do you have a fussy kid? Are they cluster feeding, teething, or simply a professional catnapper? I turned to The Guild when my daughter went through a power napping phase. It was perfect. Episodes are short—often under ten minutes—so it’s possible to knock out at least 2-3 episodes before your kid wakes up. That means if you somehow manage to get an hour of uninterrupted time, you’ll be able to finish the first season in a single sitting. Talk about a huge accomplishment! They should give out trophies for this kind of stuff. 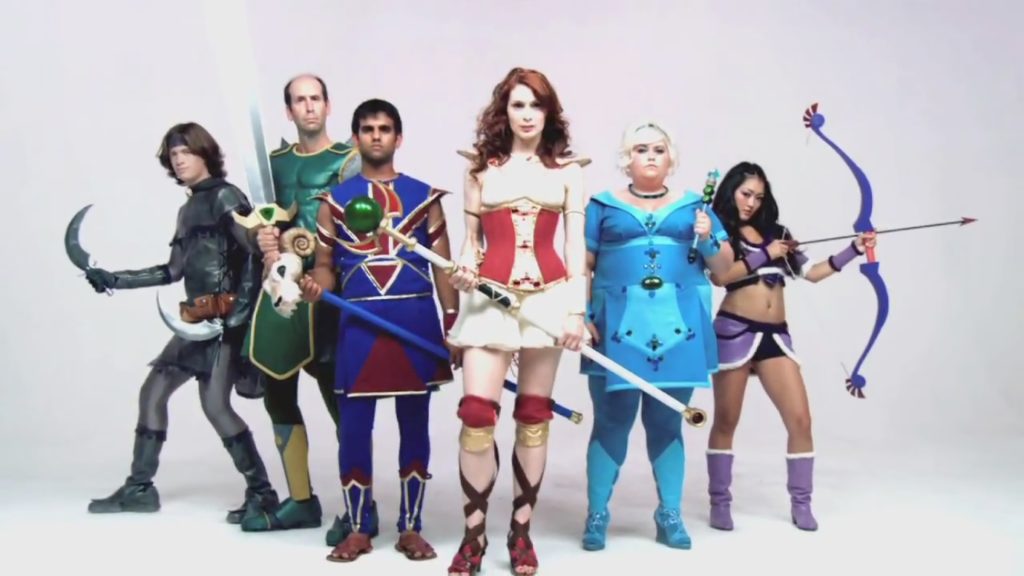 The Guild follows Codex, a member of The Knights of Good, an online guild, and her online and offline relationships with her fellow guild mates. Episodes often hyperfocus on a single issue at a time, so it’s easy to follow along without getting lost. For example, the first episode focuses on Zaboo’s (the guild’s Warlock) unusually long absence from The Game. By the end of the episode, he’s on Codex’s doorstep. Simple, humorous, and, if you’re an online gamer, totally relatable. Another reason this show is great for moms is because of Codex’s recap at the beginning of each episode. Every so often we get so caught up in making sure we’re meeting all of our kid’s needs that we become forgetful in other areas of our life. Having Codex remind us about what happened in the previous episode is a great way to keep busy moms fully immersed in the show. The Guild makes sure no one is left behind. Sometimes 3-4 minutes of alone time is all you need to recharge.

This year marks the 20th anniversary of the Pokemon anime. 20 years. It’s been 20 years, and Ash still isn’t a Pokemon master. It appears that he’ll be trapped in that ten year-old-body forever. In XYZ, our heroes (Ash, Serena, Clemont, and Bonnie) continue to explore the Kalos region. If you’ve been following the plot, then you know that we’ll learn more about Ash’s Greninja’s transformation and the prophecy concerning Kalos’ destruction. If you haven’t been following along, it isn’t the end of the world. Each Pokemon series essentially has the same main storyline—Ash’s incomplete journey. As long as you keep this in mind, you’ll be okay. 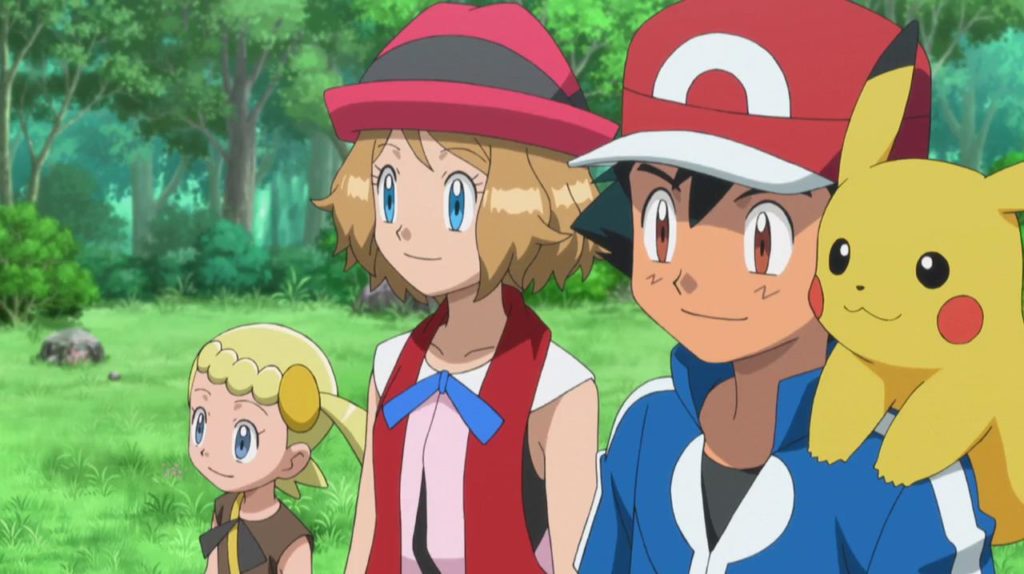 Pokemon is perfect for tired mothers because its target audience is young children. Hence, the plot never becomes overly complicated. In fact, it’s actually quite repetitive, relying on the same familiar tropes from its early days. For instance, there are a few things you can always count on: Ash will not win the league he’s competing in, Team Rocket will fail at stealing our heroes’ pokemon, Pikachu/Ash will somehow defeat an opponent who has an elemental advantage over them, and Team Rocket will be “blasting off again” by the end of each episode. Anything beyond the aforementioned is typically just explained to the viewer. I’m not even joking. Bad guys give out the details of their master plan without provocation, minor characters will narrate everything that they do, and others simply standby and analyze battles aloud. The only way you’ll get lost watching Pokemon is if you doze off. Even then, when you finally wake up, I’m certain someone will be there (on screen, of course) to get you up to speed.