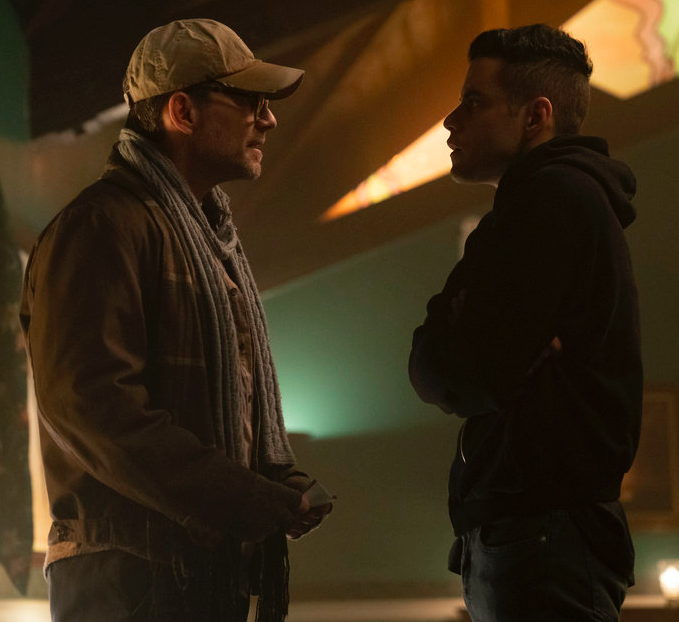 Hello friend, and welcome back to the series finale recap of the Mr. Robot episode “Payment Required”.

This recap is filled with spoilers, so if you have not seen the second episode of season 4, stop reading, watch and come back. We’re here to fill in any gaps that you may have missed. Now let’s begin, shall we?

The Deus Group Funds Whiterose and The Dark Army

Phillip Price walks us through the history of Minister Zhi Zhang aka Whiterose and her network of hackers and terrorists. She’s built an evil empire aligning with dictators and international dignitaries for quite some time. Images of her shaking hands with Vladimir Putin and being knighted by Queen Elizabeth II shows how well-connected he is with various influential leaders. Industrial espionage is a game that Whiterose has mastered, and as it turns out E Corp is a front for The Deus Group. And as Americans became more vulnerable exposing their data in a social networking world, Deus Group manipulated the public and Zhang positioned himself to take total control.

Dom Is Interrogated About Santiago

Poor Dom has been on pins and needles, last week she was threatened by a sleeper agent named Janice who is tracking her and now she’s being investigated. She discloses to Agent Horton that she believes Santiago was a double agent. She further exposes the Trujillo drug cartel — which turns out to be a made-up cover story fed by Janice.

Magda Alderson was an abusive parent towards little Elliot and Darlene which started shortly after their father Edward passed in 1995. When their mother dies in a nursing home, Darlene feels relieved and Elliot keeps his emotions compartmentalized. Darlene discovers their mother owned a safety deposit box and is curious about its contents. However, when they learn that the payment for the safety deposit box lapsed, the bank disposed of it. Darlene has an emotional outbreak and her real sadness — about Angela’s death — emerges and the Alderson siblings have a moment reflecting that Angela is gone.

Darlene Opens Up To Elliot About Susan Jacobs

In season 2 episode 6, Susan Jacobs’ smart home was hacked by FSociety. Darlene, Trenton, Cisco, and Mobley took over her house to use as their headquarters. Darlene gets into it with Susan, tases her and Susan falls into the pool and drowns. Darlene finally explains to Elliot what happened and this infuriates him. This is obviously a setback for his plan to spy on Susan since she is yet another surrogate of the Dark Army. Elliot tells Darlene to give him everything she knows about her. When Darlene asks why Elliot reveals he’s going after Whiterose.

Is There A Third Construct Within Elliot’s Mind?

When Darlene asks Elliot if she should be concerned about Vera, the drug dealer responsible for Shayla’s death in season 1, Elliot is confused that she knows who he is. If you recall, last season Vera introduced himself to Darlene outside of her apartment building. Elliot now concerned over the safety of his sister lashes out at Mr. Robot for telling Darlene about Vera. However, Mr. Robot swears he never did. The next scene is a shot of a young boy sitting a high rise office building turning around incessantly in a swivel chair. He’s interrupted by a woman telling him he shouldn’t be sitting in that chair and that “we need to wait for him”. When the boy asks if its Mr. Robot or Elliot, she says, “no, the other one”.

Who is this little boy asking about Elliot and Mr. Robot? Is there a third party here in the background pulling the strings? Why is this show always so confusing?