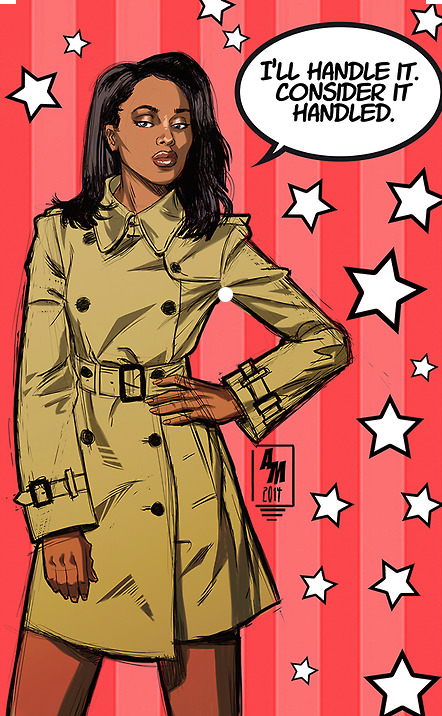 After seven amazing seasons, ABC’s Scandal has come to an end.

Saying goodbye to the hit series is bittersweet. The series was groundbreaking and unflinching when it came to tackling issues such as race, gender, class, sexual orientation, justice and how they intertwine with the American political landscape. So watching the final episode is quite difficult. On the other hand, my therapy bills are going to drop dramatically.

Looking back on the past seven seasons, it’s clear that Scandal doesn’t exactly fit one genre of television. Not surprising given that true artistry tend to defy labels. More than a political drama, Scandal is also an action thriller. Think West Wing meets 24 for lack of better description. As a speculative fiction author, I’ve long since noticed the comic book elements in Scandal. This point was driven home at the beginning of the final season when Olivia took over the off the books agency B-613 and essentially became the Shondaland equivalent of one Amanda Waller. Upon further review, I realized there were at least seven key signs throughout the run of the series that confirmed that all things Scandal come straight out of the funny pages. And Olivia Pope is nothing short of a superheroine.

Every superhero requires a larger than life backstory, and Pope’s is one for the ages. Was she bitten by a radioactive spider? No. The last daughter of a destroyed planet? Nothing so basic. Pope’s origins are more akin to another extraordinary superheroine of color, Cassandra Cain.

The daughter of Maya and Eli Pope, Olivia lived a very privileged life. After believing her mother to have perished in an airplane crash, Olivia attended boarding schools with the children of kings. After law school and working on Fitz’s presidential campaign, Olivia would quit and start her own firm as a crisis manager.

Throughout the series, Maya and Rowan have orchestrated plots that threatened the United States and the rest of the free world. Olivia has been forced to match wits with the estranged Huxtables from Hell in order to stop them. This was often done with Olivia teaming up with one parent to stop the other. The cerebral chess games of cat and mouse often left viewers wondering if this family of alphas were not in fact exiled Wakandans. Viewers also thanked the heavens that the Popes were an estranged lot.

Even The Batman requires a team of operatives from time to time. Olivia Pope & Associates are just as formidable in their own right. What makes the Pope team special is that each member is a broken soldier with a tragic origin. They exorcise their internal demons by fighting for redemption while fighting for the downtrodden at OPA. Whether the courtroom, a press conference, or a dark alley in D.C., Pope’s team are gladiators in every sense of the word. They range from spies, investigators, hackers, to ex-soldiers and reformed assassins.

3. The Bizarro World That Is Scandal’s Republican Party

As a speculative fiction author, I make a living imagining the impossible. My first two novels featured angels, ghosts, wizards, witches, demons, vampires, psychics, etc. That said, even I’ve got my limits. If I have one gripe about Scandal it’s the grossly unrealistic portrayal of the Republican Party. This Grand Ole Party is an inclusive party that has a Black woman serving as the chief of staff; an openly gay vice president; A female Republican president who is actually strong, decisive, wise, and competent.

I have an easier time suspending disbelief when I’m watching Once Upon A Time.

4. Olivia Pope Is The Epitome Of The Phenomenal Black Woman

I walk into a room

Just as cool as you please,

The fellows stand or

Fall down on their knees.

Then they swarm around me,

A hive of honey bees.

It’s the fire in my eyes,

And the flash of my teeth,

The swing in my waist,

And the joy in my feet.

It should come as no surprise that Olivia is both gifted and exceptional. After all, she was created by her excellency, Shonda Rhimes. Read Rhimes’s autobiography A Year Of Yes and then tell me that she isn’t #BlackGirlMagic personified.

In addition to being the best fixer and spin doctor in D.C., Olivia also a master strategist who can easily give Waller a run for her money.

A kingmaker, Pope was instrumental in placing both Mellie and Fitz in the Oval Office whether it was through running their campaign or occasionally rigging a presidential election. She’s also unearthed more than her share of governmental conspiracies and has thwarted an assassination attempt or two. She’s also assassinated a leader or three; Most notably, two U.S. vice presidents. They had it coming.

Another of Olivia’s most badass moments was when she was cornered in her loft and threatened by the director of the CIA. 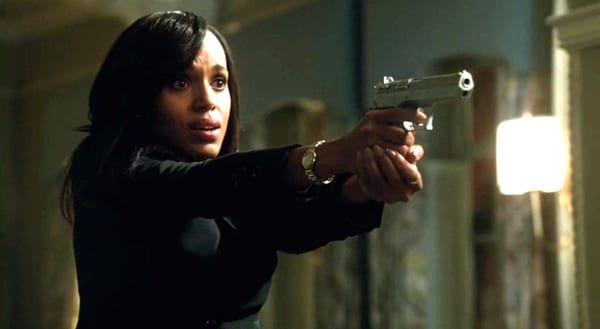 And like a boss, Olivia pulled her cell from her Burberry and explained to the CIA director that in her contact list were the names and numbers of shot callers and power players who could and would kick his ass in every conceivable way possible on Olivia’s behalf. Knowing she was neither bluffing or exaggerating, the CIA Director made a prompt exit.

While Liv rarely gets her hands dirty, don’t be mistaken, when she has to be, she can hold her own. She’s proficient in firearms and upon learning the mastermind behind her kidnapping, Olivia delivered a one-woman conchairto that was so vicious, the entire WWE roster was taking notes.

The force of nature that is Olivia Pope was best summed up by Fitz’s former secret service agent and B-613 sleeper spy, Tom, during a one-on-one sitdown he had with Olivia.

He came to your apartment once after you left town. He insisted. So we brought him. Middle of the night. Not even a follow car. Just four agents and my president. I think he had to see it for himself, see that you were really gone. We had a key from the landlord. The president went in and he just… The other three agents stayed outside in the hall, but eventually I went in, too, because of the sound. He was making this noise. Not crying, more like… I don’t know. I’ve never heard a noise like that before. He stopped when I came in. And we just didn’t talk about it. He’s my president. He needed you. He was in pain. He wanted to die. He tried, you know. Once. I could protect him from everyone. Except you. I could never protect him from you, Ms. Pope. You are beautiful. But really, it’s what’s behind your eyes. I can see it. And you know they all love you. My president, Jake, command they all love you. And I can see it. I can see why. Helen of Troy. The face that launched a thousand ships. She didn’t have a father, either. Her father was a God.

You know you that chick when you have a gay man giving you that level of praise.

The Scandal/How To Get Away With Murder crossover was one of the greatest television events in recent memory. When a case regarding defendants receiving adequate legal representation makes it to the Supreme Court, Keating and Pope find themselves reluctantly joining forces.

The highlight of the two-episode event was the beauty salon scene. The exchange was the sisterly conversation that has been long overdue: Rich black girl and poor black girl. Light skinned sister and dark-skinned sister; Northerner and rural Southerner. Tea and face were served, edges and crowns alike were mutually snatched and when the smoke cleared from the verbal stalemate, both queens made their exits looking flawless and ready to fight injustice.

While Keating and Pope couldn’t be more different, both learned from the other and showcased why each is exceptional in her own right. By the end, mutual admiration and respect were earned from the two women. Much like Batman and Superman, this World’s Finest Duo went from adversaries, to reluctant colleagues, to allies, to sisters in arms.

The good guys often wear white hats. Pope does so both figuratively and literally. In fact, it’s part of her signature ensemble. This white hat fights for the downtrodden and the Republic by any means necessary. When they go low, she’ll go lower. Her adversaries quickly learn not to let the necessary occur.

7. Olivia Pope Is Saving Her World And Ours

Scandal is almost Inception-like with its complexities and layers. More than a political drama, more than an action thriller, this series was a love letter to all things #BlackGirlMagic. The series made terms and issues such as privilege, slut-shaming and dog whistle politics water cooler topics on Friday mornings at work. Scandal gave a voice and a platform to people of color, LGBTQs and other minorities. The cultural impact this show will play for years to come is proof that Olivia Pope is straight out of a comic book. For what are comic books but modern day mythology that critiques the human condition, ask the important questions and challenges us to evolve. Whether Pope is saving her world or ours, one thing is certain, “It’s handled.”