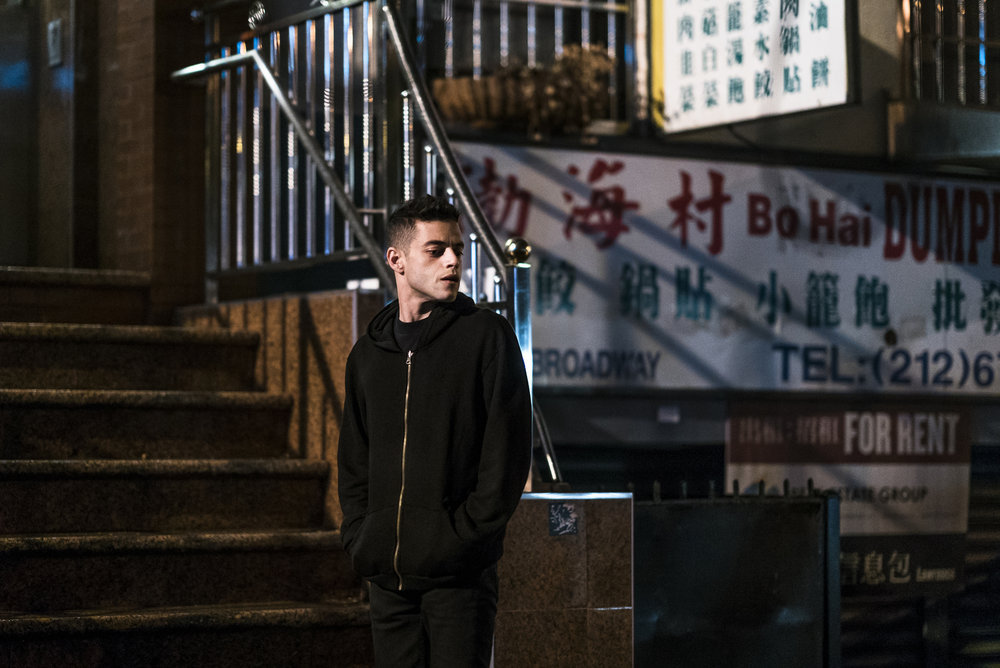 This episode dealt with the idea that what you delete isn’t always gone forever. It also brought along some excellent character development to Elliot Alderson.  I want to share 7 thoughts I had about this episode that made me realize how incredibly brilliant this series is.

I’m a bit of a movie geek and I immediately knew when Elliot and his father were at the movies waiting to see the film Shallow Grave as well as seeing the movie poster for the film about a pig called Babe—that it was the year 1995.  Does this year have any relevance?  Probably not. But it’s interesting to see when Sam Esmail deliberately takes us to specific points in history to uncover a plot point.

The Entire Episode Was Broadcast In Letterbox

The widescreen aspect ratio that gave the episode a cinematic look was definitely intentional. We start from a scene that begins in a movie theater, and then we evolve into a story where we are the theater patrons watching Elliot’s story unfold on the big screen.  Technically the small screen with really cool letterboxing, but you get the idea.

The aftermath of Mobley and Trenton’s deaths along with the second attack that has slaughtered thousands has Elliot ready to do a complete wipe down and delete everything in his surroundings.  He makes a final trip to see a drug dealer and scores a significant amount of morphine.  What Elliot doesn’t realize, is that just because you try to delete something, doesn’t necessarily mean its permanent.

I believe Trenton’s younger brother Muhammad (Elisha Henig) was an angel to Elliot. The pressing moment was when Elliot was at the beach ready to overdose on morphine and by fate, he is interrupted by this little inquisitive boy who essentially saves Elliot’s life.  He was also born in Trenton, which was just—a weird coincidence. What made this story arc so ironic is that Elliot’s paternal moment with Muhammad was to ensure what happens to him after dealing with the traumatic death of a loved one; never affects him the same way it did for Elliot. Through Muhammad, he deals with coming to terms with his own loss and eventually learning to forgive himself.

Mobley’s Brother Is A Terrible Human Being

As it turns out Mobley’s brother (Dileep Rao) is not only a terrible human being, but he’s also a complete idiot. Let me explain. Mobley is perceived by his sibling as the ne’er do well brother that has always been a “screw-up”.  Mobley’s brother believes everything he sees on the news and was gullible enough to be convinced that his own flesh and blood is a terrorist.  He hates his brother so much, that he refuses to bury him.  What an a-hole. It also turns out after Elliot hacked Mobley’s brother, that he lacks a moral compass.  Who’s the screw-up now?

I Enjoyed the Say Anything Moment Between Elliot and Angela

With a swelling of 80s synth-pop beats in the background, Elliot talks to a broken Angela through the wall of her front door. It is during this moment Elliot breaks down his own walls and supports Angela through her on-going trauma. It’s a beautiful moment that these two share that’s indicative of a relationship that is unbreakable—no matter what the cost.

The “Most Critics Have Shitty Taste” Line Took Me Out

The show took a jab at the popular rating site for film critics called Rotten Tomatoes, where film critics submit their opinions through the use of a Tomatometer and elect whether a film is fresh or rotten.  Fresh being good and rotten being bad. After Muhammad said the Matt Damon film The Martian got 92% on Rotten Tomatoes, Elliot’s line “most critics have shitty taste took me all the way out.  I’m a critic myself, and I found that line hilarious.  Of course, Elliot wasn’t talking about critics like me—he was referring to those other critics.  I’m also glad they didn’t see Jem and the Holograms because that would have been a disaster for both Muhammad and Elliot.

This episode has shown the best character development I’ve seen yet of Elliot Alderson.  It’s a beauty to watch every layer of his character peeled and exposed from one week to the next.

Tune in with me again for next week’s episode of USA’s Mr. Robot which airs every Wednesday night at 10pm/9c. You can live tweet with the @blackgirlnerds community on Twitter under the hashtag #DatBot.