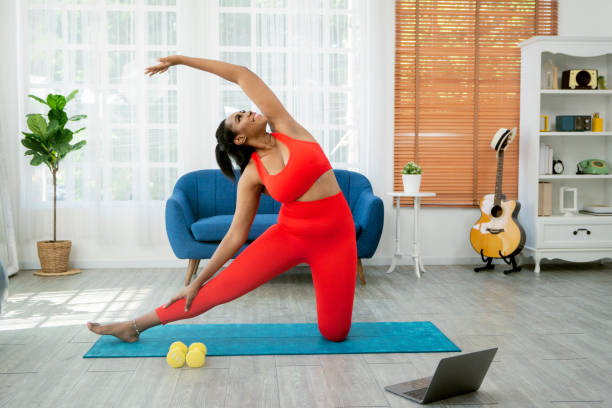 If you Google the term yoga, you’ll most likely see similar photos of fair-skinned and small-framed women in a fancy yoga pose. These pictures don’t show the diversity of yoga over the past 20+ years.

In 1975 an article in Ebony magazine featured some of the great leaders such as Angela Davis and Krishna Kaur. In their interviews, they spoke about the positive effects that practicing yoga had on Black women. In addition, Pam Grier and Rosa Parks were yoga practitioners as well. These women practiced yoga not only for the positive results yoga has on the body but for the effect yoga has on the mind.

Grier said ” I started to practice yoga to quiet my mind and learn to be still.” She studied natural healing methods and committed to a daily practice, even on movie sets. “The point was to be able to sense—in other words, to feel and hear—any medical issues in the body and mind.”

Even Eartha Kitt, who never exclusively called her physical practice yoga, spoke of the mind-body benefits. ” When the [brain and body] are functioning well in concert, there is nothing in the world more exciting,” she said. “So I strive to make the body love the mind, and the mind loves the body, keeping the spirit vigorous as a consequence.”

Yoga is an exercise for not only your body but your mind as well. Muscle builders show off the thickness of their biceps. But, yogis can flaunt the thickness of their cerebral cortex and the hippocampus. These areas in your brain are responsible for information processing, memory, and learning. Studies have shown that those who practice yoga have increased brain functions such as memory, attention, and language. Yoga can even lessen how much your brain shrinks as you get older. Yes, your brain shrinks with age.

It’s well known that exercise releases endorphins, a hormone that helps put you in a happy mood. However, yoga helps release another amazing chemical called gamma-aminobutyric acid (GABA). This happy chemical has been known to decrease anxiety. When paired with other treatments such as talk therapy, yoga can help reduce depression and post-traumatic stress disorder.

Anger can sometimes feel like an automatic response to some of the injustices in the world. Yet when unchecked, anger can be detrimental to your health. It can cause high blood pressure, headaches, skin disorders, and heart problems. To avoid these health issues and reduce the negative effects of anger, yoga is a great tool. It’s also been shown to reduce verbal aggression in adults.

Throughout the many yoga practices, a common thread is the use of slow and controlled breathing. Through the activation of your breath, it can trigger the vagus nerve. This nerve is connected to your parasympathetic nervous system, which handles putting your body into a relaxed state. Breathing in yoga is like a deaccelerate button for your body. So when you’re feeling restless before bed, with a few deep yoga breaths, you can calm your body down and prepare it for a restful night.

In addition to the breathwork that improves a better night’s rest, the deep breathing in yoga can ease anxiety. The meditative part of yoga has been known to reduce the worry and fear that often contributes to high levels of anxiety. Yoga introduces gaining awareness of the body to gain awareness of the mind. With greater awareness of your thoughts and emotions, you can better regulate your response to stress. Thus helping to reduce your anxiety.

One body-image survey showed that 62% of women feel negative about their body image. Yoga combats this by introducing a sense of gratitude for your body. It helps you attribute to a sense of accomplishment when you advance to different yoga postures. Along with helping to improve self-confidence. With more diverse bodies entering the yoga scene, such as Jessamyn Stanley, more women feel more confident in their skin.

Encourages a Sense of Community

The yoga scene has expanded to a more open and colorful than ever before. Amongst traditional yoga, such as Hatha and kundalini, communities have begun to create more unique types of yoga. This includes one’s representative of the culture, such as Trap Yoga and Hip Hop yoga. With these spaces, people can connect with people who share their interests in yoga. They also allow sharing commonalities in background, race, and culture. Allowing you to make connections with new people and feel supported and safe within a community.