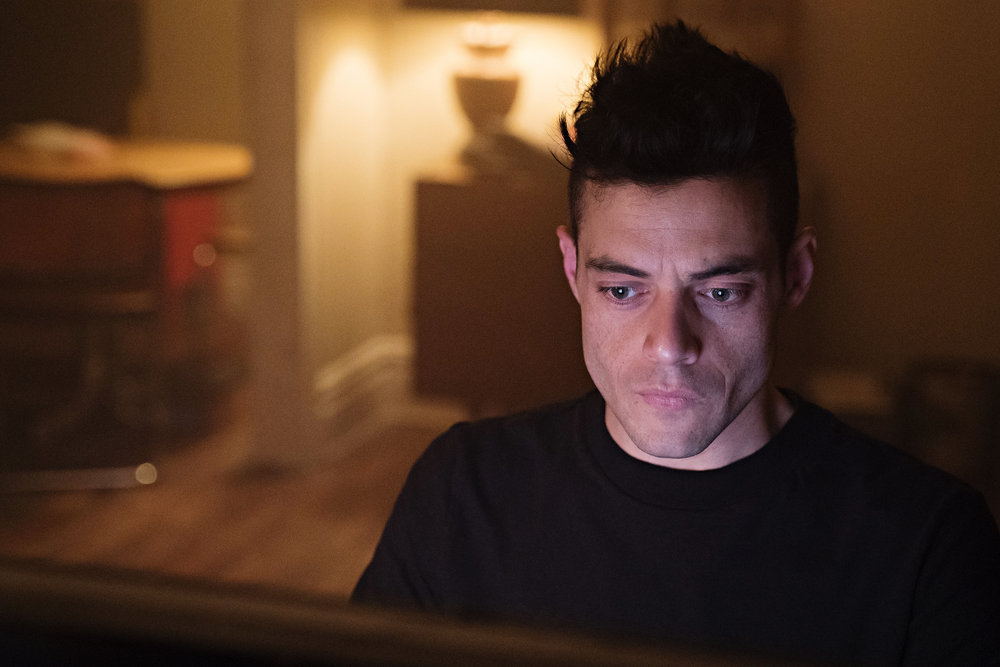 It’s getting even more intense as the plot thickens on USA’s Mr. Robot this past week.  After reviewing the episode, here are 8 thoughts I had about “eps3.6_Fredrick+Tanya.Chk”.

It would appear to make sense to surmise that when Elliot dashes off to see Krista after experiencing the trauma of seeing thousands of people die right before his eyes, that he seeks therapy through Krista.  However, that’s not the case, Mr. Robot emerges and spends more time in counsel with Krista than Elliot; which leads me to believe that he’s exposing Mr. Robot to his therapist. He’s also probably trying to get Krista to be the voice of reason since Elliot has obviously lost control at this point.

Okay, yes he’s an agent of the Dark Army and a homicidal psychopath with an affinity for sitcoms, but c’mon Leon is pretty likable.  One of the strongest performers next to Bobby Cannavale on Mr. Robot is Joey Bada$$. His delivery, cadence, and style is everything and he chews up every scene he’s in.  But I have to say, did anyone else cock their head to the side and go huh when Leon said the line “he gets more butts than ashtrays?”  C’mon now, are ya’ll really inserting Biggie lyrics into this series?

What’s The Deal With Santiago’s Mom?

It seems Esmail’s focus on this b-story with Santago’s mother is of importance.  It’s twice now that there have been scenes dedicated to phone calls with his ailing mother where’s he’s concerned for both her safety and her health. Sounds like she may be used as a hostage to extract info from Santiago.  My bet is DiPierro may get to his mother somehow.

Irving Tells The Sad Truth About Corporate Cronies And Their Wealth

Mr. Robot thought he knew what revolution he was fighting for—but quickly realized through Irving’s revelation that he was just a pawn in a bigger scheme.  While the news is inundated with reports of fatalities of many innocent ECorp employees, a group of rich selfish individuals have an extravagant rooftop party and are completely oblivious to the tragic events happening around them. Irving explicitly says, “Face it, no matter how hard you try, that’s always the end result.”

In the coldest delivery of news I’ve seen yet, Santiago without one iota of compassion tells Tyrell that his wife Joanna, is dead and that his child is in foster care.  I gasped at how blunt Santiago was with this information and being completely devoid of pity made me realize this man is one sick and sad human being.  And I’m using the term “human” loosely.

We all saw this coming the moment Angela was trying to convince Elliot that everyone will be okay in spite of the fact there were plans to blow up a building.  Now Angela has completely lost it and appears to be suffering from a nervous breakdown.  After Darlene catches Angela in her living room rewinding the playback of the explosion on the news and playing it over and over again; it’s clear that Angela has gone off the deep end.  The question now is, will she recover?

**Spoiler alert here** It’s difficult when characters who you’ve invested in for multiple seasons come to an abrupt end.  Sadly both former fsociety members Trenton and Mobley lost their lives in this episode.  They were both used as a patsy by the Dark Army for the second attack all orchestrated by Whiterose.  The moment Tyrell blamed them, we knew their number was up.  Damn, I really liked those two.

I didn’t realize until this episode that Whiterose’s petty levels are beyond reach. Whiterose literally coordinated a terrorist attack responsible for the slaughter of thousands of people, property damage most likely in the billions and manipulated everyone within her sphere of influence just to teach Price a lesson. It turns out because Price didn’t have a handle on Angela and the impending lawsuit against one of Whiterose’s chemical plants, she decided to tell him in her own way that she is not to be played with. And she doesn’t like being asked twice.

There were so many plot twists and turns and I’m am amazed at how petty Whiterose is as a villain. This show from one week to the next still manages to surprise me at every turn.

Tune in with me again for next week’s episode of USA’s Mr. Robot which airs every Wednesday night at 10pm/9c. You can live tweet with the @blackgirlnerds community on Twitter under the hashtag #DatBot.