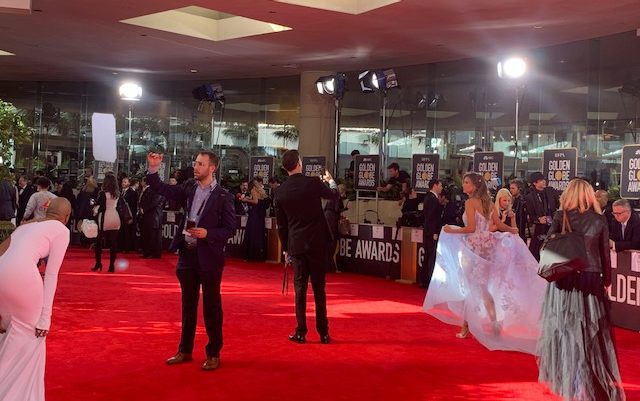 10 a.m. – Breakfast is an apple because I am too busy checking to see if all things communication are packed. Laptop? Check. Pen? Check. Spare batteries for recorder? Check. Recorder app still on new iPhone? Check. (Ok… overkill).

11 a.m. – In car driving to catch a shuttle for press at a Century City hotel.

12 p.m. – Checked in and press, publicists, security, and others are milling about the not-yet-opened red carpet. Press crews are setting up cameras, video and other tech. Publicists are arriving and checking press markers on the carpet. Security crews are having meetings about what to look for (usually press not in the right places as no one else can get into this place; security is tight this year in light of the European terror attacks).

EVERYONE is taking selfies against the backdrop of Golden Globe signs (including this writer) and other sweet spots, like in front of the floral arrangements made up of tens of thousands of blooms flown directly from Holland. 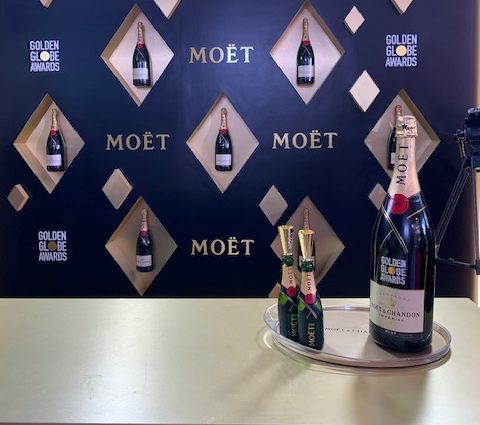 1 p.m – Moët has a booth located conveniently near the entrance of the hotel. Across from it is Fiji Water, but water is not as big of a draw as the champagne. Although, the Fiji Water girl is now quite possibly one of the most famous and glamorous photobombers in the world.

I check in with Black Girl Nerds videographer Corey Hale. He’s hoping to catch some actors from Black Panther and as many established A-listers as possible.

Since I don’t have to actually be in the press room until the show starts, I decide to hang out in the hotel lobby. It’s a long wait because the major celebs haven’t started arriving just yet.

But the place is crawling with family and friends of those nominated, as well as just fans. I even find a fan of BGN.

4 p.m. – An hour before showtime and suddenly it’s celebrity rush. I do a shoutout to Taraji P. Henson, but she’s surrounded by handlers and rushed into the auditorium for the show. Then it’s Julianne Moore and Connie Britton. They stop for a quick chat, but I see This is Us’ Sterling K. Brown, and I snap my camera phone. He sees it and quickly gives me a comical face. 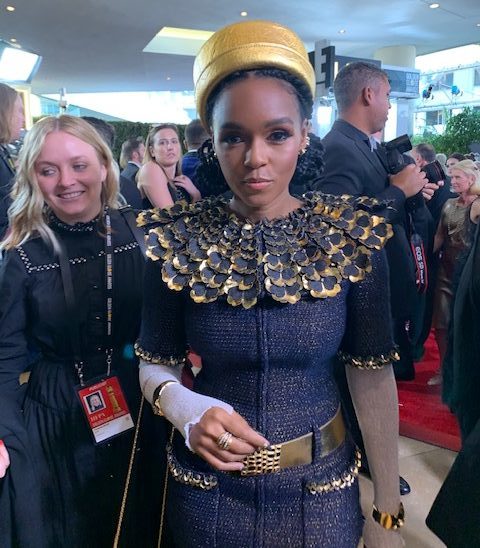 Outside Luke Wilson, Camille Belle, and Dakota Fanning have stopped to enjoy the Moët champagne, and I get a shot for social.

I see American Horror Story creator Ryan Murphy, but he’s moving too fast for anything. Meanwhile, Penelope Cruz is coming in, looking elegant with hair in an updo and Spanish-style gown, but behind her is Janelle Monae, and I do a candid snap that I hoped didn’t upset her. I tell her she looks lovely, and she does.

Michelle Yeoh see’s my camera phone and gives me a smile as she goes into the show. By this time, I, along with so many onlookers are dodging security and hotel staff that want us to not crowd the area but let’s face it, everyone, including the celebs are excited and not exactly following procedure. Other reporters are busy emailing names of celebs to their editors as the celebs arrive at the door. Then Henry Winkler comes in smiling as he walks by. 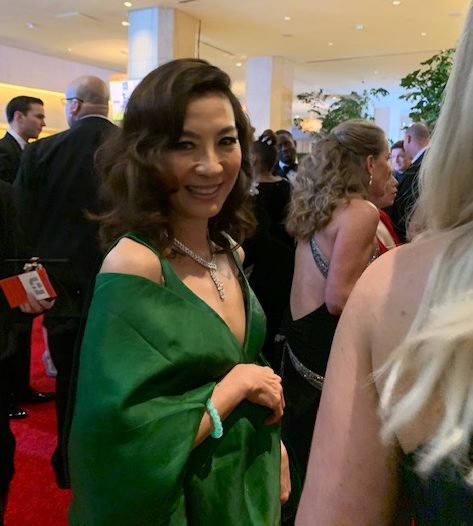 I see (soon-to-be Golden Globe winner) Regina King, but technology fails me as I ask her to smile as she walks by and the phone won’t take the shot.

Mrs. Maisel’s Rachel Brosnahan stops to pose for me and I tell her that I love the show and if she has time, to take a look at the BGN story I wrote (Yes, I am that assertive, worth a shot, right?). Too late though, to get Viggo Mortensen, then there’s Michael B. Jordan (keep reading, I did catch up with him later).

I run up to Antonio Banderas, and he gives me faux-macho pose for the camera. Grr.

4:49 p.m. – Time to go to the press room. I hook up my computer, grab a plate of the first solid food of the day, gulp it down along with dozens of others and the show begins.

Who actually comes back so we can get our questions answered is random. This year it was Mahershala Ali, Octavia Spencer and the cast of Green Book. It was also Rachel Brosnahan and Michael Douglas. Glenn Close, but not Christian Bale. Lady Gaga came backstage briefly, along with A Star Is Born best Song co-creator Mark Ronson.

When not listening, asking questions or writing, press watches the show.

Onstage, best rambling acceptance IMO, was Jeff Bridges. Backstage, best rambling speech may have been a tie between Patricia Clarkson and Patricia Arquette. Clarkson was on cloud nine after receiving her Golden Globe. And while classy, really seemed to be on a cloud while telling the press of her elation. She may have turned the Italian meat sauce and spaghetti dish bolognese into a verb. Describing what she would do after starving to fit into her a beautiful couture dress, she said she would be  “bolognesing in the next few days.”

Meanwhile, Patricia Arquette apologized for using the F-word and said it wasn’t “intentional.”  One of my fellow journos did tell her that it “makes for a good story though.”

8 p.m. – The show is over, but we are still writing ,and our last person in the press room is host Sandra Oh.

8:30 p.m. – We pack up, but for some there are parties to cover. I decide to say hello to a few friends and acquaintances, then just observe the lobby. Pete Davidson walks by and a few onlookers ask me if it was indeed him. It was.

9 p.m. – Shonda Rhimes hugs someone before going to the In Style party. Two fans ask a clearly happy Regina King for selfies. She quickly agrees, and it’s done.

Someone is stepping on Catherine Zeta Jones’ dress but a handler quickly picks up the end. 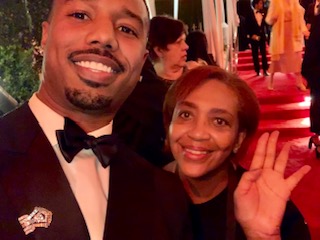 Feet tired, I am walking out when I see Michael B. Jordan with friends. I ask to take a picture. To my surprise, he is ok with a selfie. Ok, home. Pleasant end to a hectic day.