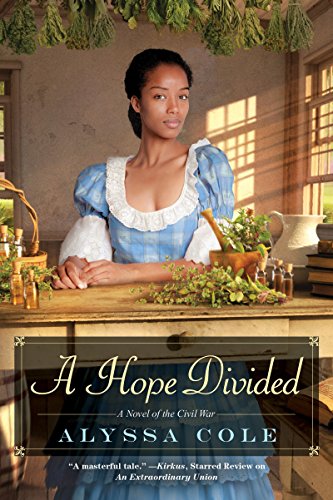 A Hope Divided, the second novel in The Loyal League series by Alyssa Cole, tells the story of Marlie Lynch, a mixed-race woman trying to find her place in the US during the height of the Civil War. Marlie has spent the last ten years living with her white relatives, a sister named Sarah, and a brother named Stephen. The majority of Marlie’s time is spent in her rooms where she creates various healing concoctions for her neighbors. She learned her trade from her mother, who learned it from her mother before being captured and enslaved from the islands.

Outside of her rooms, Marlie spends her time at Randolph prison where she shares her healing concoctions with Union prisoners, deserters, and rebels. She is always ready to provide a helping and healing hand to all who need it. It is at Randolph where we’re introduced to Ewan McCall, a Union soldier with a precarious past. It is clear from the first exchange between Marlie and Ewan that there is something brewing between them. Ewan attempts to escape prison when a new warden arrives at Randolph Prison–Cahill. Cahill has been tasked by Jefferson to whip deserters, rebels, and militia into shape.

Ewan’s escape is thwarted when he has an injury running from the prison. Luckily for Ewan, he has Marlie’s aide to help him recover. Ewan goes from seeing Marlie once a week at the prison to spending every day with her hidden away in her rooms as he recovers from his injury. During this time, their friendship progresses from simple exchanges on various books to a budding relationship. Both Marlie and Ewan are surprised by the feelings that have developed between them not because of their race but due to their own underlying insecurities that reach across racial divides.

While spending time in her rooms, Marlie begins translating her mother’s memoirs with the help of Ewan. These memoirs are the catalyst that sends Ewan and Marlie on the run from her brother’s evil wife Melody and from Cahill, who has moved into Lynchwood.

The pace of the novel increases tenfold once Marlie and Ewan are outside of the plantation traversing the underground railroad together. During their time on the run, the dynamic of their relationship takes many twists and turns as they navigate the Carolina woods. Eventually, Marlie and Ewan make their way to the northern border and must decide if they will stay together or separate to face a changing American landscape.

A particularly poignant passage in the book raises the question of the purpose of the Civil War. Marlie contemplates the purpose and meaning of Black participation in the Civil War. She wonders why Blacks have to fight at all when whites created this problem and believes the onus should be on them to resolve the issue. This presents an intriguing question for the reader and presents one of the core themes of The Loyal League series.

Disclaimer: The author received a complimentary copy of A Hope Divided for this review.

Brittany M. Thompson is a writer living in Cleveland, Oh, a city she surprisingly loves. She moonlights as an account manager Monday – Friday.  You can find her tweeting about a little bit of everything @uptownbrittany