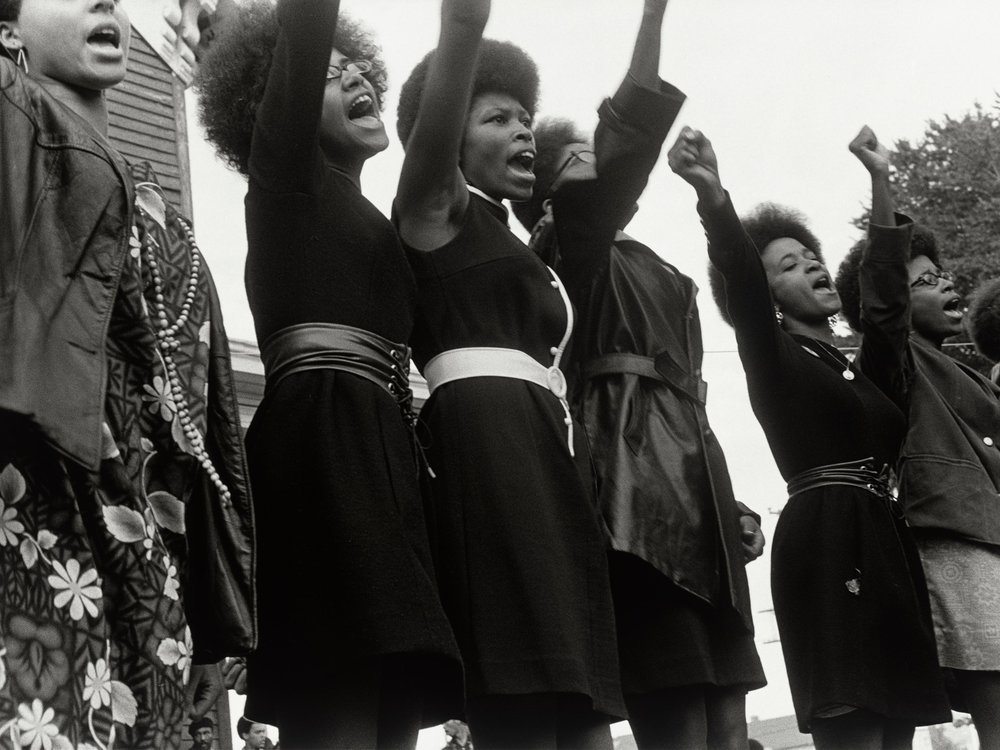 In October 2016, I traveled to Oakland, California, for the Black Panther Party 50th Anniversary Commemoration events. I loved being surrounded by former Panthers, hearing their words, and absorbing the sense of power and faith in community and love that exudes from these elders who’ve seen and done so much in their time. I’d been researching the Panthers for over a decade at that point, but being among them brought it all to life for me in new ways. Their story tends to be told the same way: the Panthers were founded in 1966 in Oakland by Huey P. Newton and Bobby Seale, and the organization would soon expand nationwide and become emblematic of the Black Power movement. The striking image of Black men with guns is seared into the American consciousness, but that image fails to convey the whole story of the Panthers in myriad ways: they were NOT the violent revolutionaries they’re often purported to be, but rather community organizers and grassroots educators: they taught political education, founded schools and health clinics, advocated for workers’ rights and tenants’ rights, provided legal aid, fed schoolchildren, sought to prevent police brutality and transform the justice system, and so much more. They were also not all men. Few people are aware that at key points in the organization’s lifespan, women formed the majority of Black Panther Party members and volunteers.

My favorite moment in Oakland was when a colleague set me up for a coffee outing with Ericka Huggins. I’d been researching the Panthers for over a decade at that point, and in most spaces, I felt quite knowledgeable about the Party, but all confidence escaped me when I found myself sitting alongside this famed educator and leader. Ericka had been one of the most well-known Panthers, as the New Haven chapter leader turned political prisoner, and later the director of the Panthers’ Intercommunal Youth Institute/Oakland Community School.

I could not have been more nervous, sitting side by side with someone I’d read about in books. My questions never seemed to come out quite right that day. Ericka seemed so cool and confident; she’d put her life on the line for her people and given her life to the movement. By comparison, who was I to write about this powerful historical movement, from the relative safety of my 21st-century perch? Fortunately, Ericka was kind. Ever the teacher, she asked me about my goals and recommended some books I should read, many of which I already knew. But I nodded and took notes and listened carefully. At one point I commented on how important it was to me to emphasize women’s role in the party. Ericka swiftly corrected me, saying: “Not women’s ‘role in the party.’ Women were the party. You wouldn’t hear someone talk about ‘men’s role in the party.’”

I thought about that moment a lot in my writing process over the subsequent years. It’s a bit of a double-edged sword, trying to represent the unique experiences of women in the Party, and to acknowledge the ways their experience was colored by gender and by sexism inside the ranks and out, while also striving to take their participation for granted, and not to inherently “other” them by virtue of their gender. It’s a balance, to lean into the truth that “women were the party,” without diminishing the challenges they faced in the course of doing the everyday work. I remain unconvinced that it was any harder to be a woman in the Black Panther Party than it was to be a woman anywhere else. We have a tendency, as a culture, to demonize Black men and to lay expectations of sexism and sexual aggression on their shoulders. To argue that women in the Black Panther Party experienced such challenges because they were in the Party is simply another way to put strikes against the organization. The truth is that sexism is reflected within activist movements because sexism pervades our society.

The entire narrative of the party that has been passed down is colored by sexism, by the cultural expectations and biases present in the Panthers’ day as well as those that affect the way we tell history. Panther women did everything the men did, and more. Why do we always center the men, when women were the majority? The historical record bears this out over and over again. It makes it hard, sometimes, even for writers like me who care about correcting the record to achieve those corrections, because the texts we have to draw upon are steeped in the same bias. Consequently, it becomes self-repeating if we don’t take deliberate steps to overturn the simplified version of the past. This is the challenge for all of us who engage with history, to constantly look deeper and think harder and ask “what else is there to know?” Because there is always more to know.

To learn more about the Black Panther Party and A Revolution in Our Time, visit www.revolutioninourtime.com

Pick up a copy of the book at Amazon, Bookshop, or Indiebound.

Kekla Magoon is the award-winning author of over a dozen books for young readers, including The Season of Styx Malone, How It Went Down, Light It Up, and X: A Novel, co-written with Ilyasah Shabazz. She has received the Boston Globe-Horn Book Award, the NAACP Image Award, and three Coretta Scott King Honors for her work, as well as being longlisted for the National Book Award. Kekla grew up in Indiana, was a longtime NYC resident, and now lives in Vermont, where she serves on the faculty at Vermont College of Fine Arts. To learn about other aspects of Kekla’s work, visit her author site.