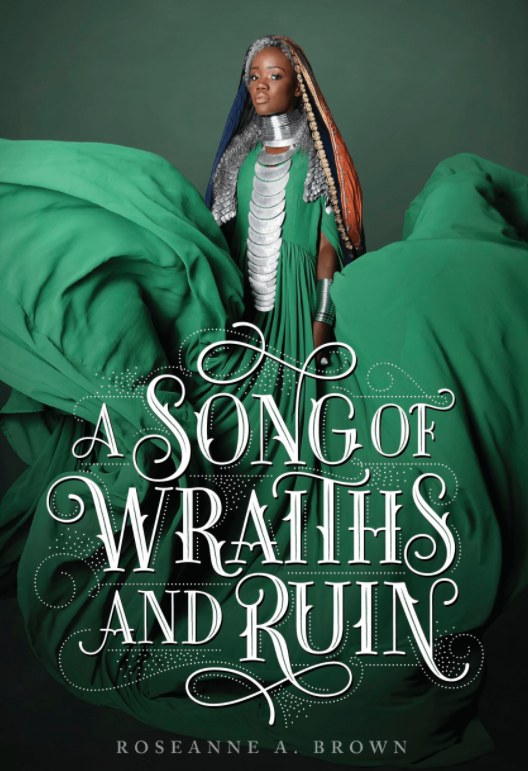 Roseanne A. Brown, known otherwise as “Rosie,” hails from Ghana and brings with her all the rich culture and storytelling prowess needed to craft an excellent Afrofantasy world that pulls heavily from her West African heritage. In her debut novel, A Song of Wraiths and Ruins, Brown gives us a strong sense of how cultures both blend and clash when a would-be queen and refugee find themselves embroiled in political plots and ancient magical ceremonies that hinge on each other’s survival.

Karina is the crown princess of Ziran, a prosperous desert empire where her family has ruled for ages. She lives her life in the shadows of those who came before her — a talented sister, a fearsome mother, and a legacy she has yet to fully comprehend the complexity of. The only problem is she doesn’t live up to any of it.

Malik is a boy from a troubled land, plagued with trauma and anxiety, and trying to survive poverty and escape his war-torn home with his sisters. Full of powers and abilities that people have tried all his life to stamp out of him, his sanity is truly tested when he realizes the things he can see, and do, are real.

Both protagonists, unbeknownst to each other, are on a mission to kill one another and save their families. Both must navigate the political intrigue of a society full of untrustworthy court advisors, assassins, and xenophobia-fueled civil unrest. And both must do it despite whatever feelings they may be having for each other.

While Brown has crafted a world full of interesting lore and beautiful myths, the characters and events that inhabit it leave something to be desired.

As a fantasy series, the story has a notably soft magic system, characterized by very loose and undefined rules about what magic can and cannot do. Some people love that, some people hate it. Personally, I did find the spontaneity with which things just seem to sometimes happen a bit unsatisfactory. Magical occurrences are often convenient ways to overcome obstacles in the narrative that feel less creative than I would have liked. This also contributes to the overall lack of agency the characters often had. For a story about two people whose stakes are the lives and souls of their beloved family members, the plot spends a lot of time meandering from one story beat to the next while neither protagonist does much in the way of action or decision making.

Normally, this happens when a book is very heavy-handed in the romance department, preferring to fill the time between action scenes with bonding moments for the main characters.

That wasn’t the case here.

The beginning of the book places a lot of distance between our two leads. As in, they don’t actually meet for a very long time. If you’ve come looking for a fantasy romance with an extra emphasis on the romance, I don’t know that this will be for you. The love story was slow to manifest, not even beginning to show its head until about halfway through the book. Even for fans of the slow burn, that might be a bit much.

All that being said, the world-building was strong. The sense of place and culture that Brown created felt tangible and believable. I felt compelled to learn more about the history of this land and its various peoples almost immediately. To her credit, Brown definitely put the work into shaping the layout, politics, and societal relationships of her world in a way that feeds intrigue and will keep you going despite the lack of romance and character-driven action in the first half.

I also appreciated the story’s depiction of emotion. Brown was very unafraid to give her Black male characters a sense of vulnerability and emotionality that I think is sorely lacking in our media. Malik in particular has a lot of softness to him that, in the context of his trauma, is very well depicted. Many of us are used to male fantasy leads holding back their tears and building up stoic walls to shield themselves from their own hearts and souls. It was nice to get a break from the brooding bad boy and delve into a Black male character who feels as deeply as Malik does.

Brown has a definite talent for crafting and depicting fantasy worlds, as well as unique and emotion-driven characters. I just wish those talents had been balanced better in the pacing of the story overall.

The second and final book in this duology series, A Psalm of Storms and Silence, is currently scheduled for release on November 2nd of this year.