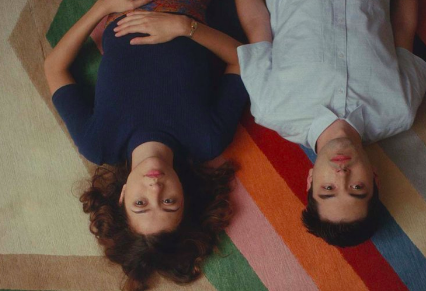 The playful repartee that many have come to enjoy from shows like the Gilmore Girls and Sherlock has reached cinematic heights with this latest film, Straight Up.

This unique cinematic experience impeccably combines (while flipping them on their heads) the romantic comedy genre with a coming-out story. Say goodbye to the heteronormative understanding of love and say hello to the gay/asexual/ambi-sexual affirmative notion of love. This marvelous concoction was brewed by the devious mind of James Sweeney, who also wrote, directed, and starred as the main character of this delicious film. This is a story about an odd couple whose romantic friendship develops out of intellectual attraction rather than a sexual one, redefining what it means to find a soulmate.

Sweeney, in his motion picture, enjoys presenting a cerebral attraction between his characters. He casts himself as the protagonist character Todd, in this film debut that just what a triple threat director/actor/screenwriter can do. Sweeney as a double minority speaks to the idea that representation in the media matters and that everyone is deserving of a good love story. Todd is a gay, asexual male who finds love with the last person a gay male could consider — a straight woman. His love interest Rory is played by Katie Findlay. Findlay’s character is not unlike the Rory we have come to love from Gilmore Girls. In fact, that reference is made in the film. This film speaks volumes to our society in regard to who gets to find love.

The movie’s storyline is brushed forward with the rounding out of Todd’s close friends and their partners: Todd’s friend Ryder (James Scully), friend Meg (Dana Drori), and her lover Zane (Joshua Diaz). Each one of these special characters helps Todd with his understanding of his own sexuality. Some prove to be more helpful than others, but ultimately, they are all trying to help the best way they know how.

Straight Up dazzles while it educates and entertains. This fabulous film uses terms like “corporal,” “antipathy,” “emblematic,” and “perspicacity,” while also poking fun of its own smartness. The sapiosexual theme has been applied and proven to be a positive one in shows like Sherlock, where the strong female character “The Woman,” aka Irene Adler (Lara Pulver), proves to be a match for the titular character. In Straight Up, the two characters fall for one another’s intellect. This is made clear when they both talk about applying to Yale because of their interest in Gilmore Girls. But just like any rom-com, no good thing can last without there being some kind of complications to their unique coupling. This struggle is brought on by a modern understanding of a relationship — one that is not often covered in people’s everyday lives. This film gives way to the underappreciated and overlooked forms of sexuality.

This motion picture has what audiences want to see. They want real stories with characters that feel real, even if they might not be. The storyline and the emotional rollercoaster that is life is portrayed in a harsh light where not everything is answered in clear and simple lines. Sometimes the lines blend and the colors run together, which can reveal an unpleasant image, but sometimes it is the abnormalities that allow the image that is seen to appear beautiful to those who are open to it.

The story feels fresh. This is a narrative that is not often explored from a colorful perspective of a queer person who is not just about getting the man and showing sex. Too often the narratives that circle gay and queer stories are about physical mating, yet queer people are more complex than that. This film explores a different kind of gay narrative, one that opens discussion up to a different perspective. The queer perspective here shows that gays can, in fact, love straight women, but in a slightly different way than what the heteronormative understanding of love can be. The costumes, music, and color scheme all work in harmony to beautifully express the banality of situations, without overhyping the idea that girls and gays just want to have fun. Sometimes, they just want to stay in and play sexy games, while other times, that is not what they want.

Rory and Todd on the surface do not seem to be an ideal match, despite the number of things they have in common, including the concept that they might both really like men. This relationship is less about the physical connection and more about the incorporeal connections that boil just below the surface and that are felt just as deeply. The film Straight Up gives you a sense of love from a different perspective. No jabs, no punches, just a real-life interpretation of what two people in love with each other’s mind would look like — just a lot of heart.