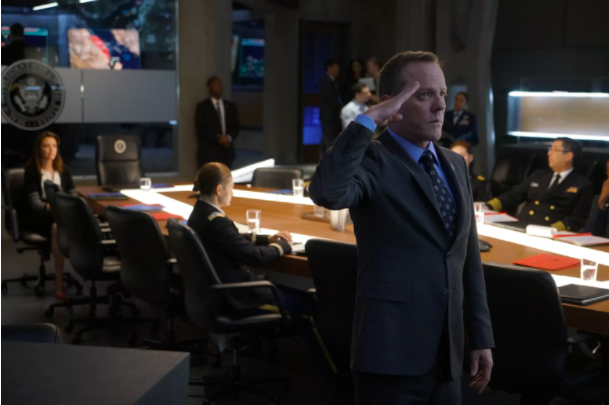 This episode of Designated Survivor opens picking up where things left off last week. Darius Cray was suspected in killing Charlotte, but then an alibi proved that to be false. Upon further investigation by Hannah and Damian, they determine Darius Cray’s wife has to be the mastermind.

It seems now that in every episode, Kirkman is presented with a problem to solve. This week an American United States destroyer ship collides with a barge and is at risk of sinking. To make matters worse, the ship is practically stranded in sanctioned regime territory near the Middle East. Kirkman gets a report of the lives lost (including the captain) and damages to the ship and is told the ship is sinking. I immediately began to wonder how Kirkman will fix this. As I felt panic, Kirkman went into action to control the situation. He used his people skills and coaxed a nervous young man into stepping up as the ships new captain.

Then things are back on Damian and Hannah. As expected, Hannah would conveniently forget that she was about to have sex with Damian last episode and acted as it all was work as usual. Damian tried to talk about it and was quickly shut down. Hannah clearly has feelings and a heart, so I’m not sure why she turns down or outwardly ignores any possibilities of romance. Maybe there is more to Hannah than they are currently showing us?

Emily the Chief of Staff becomes Emily the Brain Fart. She is completely off her game and I began to wonder if she was about to announce she is pregnant or something. Luckily, Seth seems to be the only one who pays deep attention to her lately and he asked Emily what’s going on. She then spills about the pain of a father who didn’t want anything to do with her until now. She initially wasn’t going to meet with her father because she was worried about putting out fires at the White House. Seth, a very wise man, tells her that the world will always be on fire. Emily takes his advice and decides to go see her dad. After a very tense meeting, they seem to make up. Emily invites him to come with her to the White House and it’s so cute to see her dad watch her work. It’s good to see that Emily isn’t so tough and has real-life daddy issues.

In another ongoing sub-plot, the First Lady’s mother wants her case to go away. I want the case to go away also, especially because I don’t see how it connects with anything else. She admits to Kendra that she actually did see the contractor recently, which then leaves the First Lady vulnerable to an obstruction of justice charge. Maybe the Kirkmans need to consider letting her go back home; she is nice, but she is causing problems. I hope that she will come to her senses, cooperate with Kendra and put the case and this storyline to rest.

Meanwhile, the ship is still sinking. While Congress wastes time looking for solutions to dealing with the opponents in the Middle East, Kirkman has other plans and orders a review of the path of the ship and the barge. Just when I thought other countries were done testing Kirkman, I was surprised to see that the barge moved in to hit the ship on purpose. Then it is revealed that the ship isn’t any ordinary vessel, it has very valuable technologies that can be weaponized by the enemy. Knowing that Kirkman still holds true to his morals and decides to give the ship away to the opposition in exchange for everyone on the ship. This works and we are led to believe all are off the ship, then it is reported that one person is missing. The Captain decided to stay on the ship and take it down do the enemy couldn’t have it. Kirkman tries to reason with the Captain, but he remained firm in his decision. Sadly, Kirkman couldn’t convince him — for once in a long time, Kirkman’s charm doesn’t work in swaying someone’s opinion.

In a cute pick-me-up, after seeing the young promising captain go down with his ship, we are brought in on a sad Emily. Emily’s father popped up out of nowhere only because he thought he could use her for a presidential endorsement for a… corkscrew. Yep, that’s a low blow and I felt bad for Emily. Seth comes to the rescue and picks up her spirits after saying she is bread, one of the best things in the world. It’s corny, but genuine. They embrace and kiss afterward. I’m shipping them; Emily and Seth can be great together. What about Aaron though?

Just when we are all feeling warm and fuzzy, we get reminded that again Kirkman may have to tighten his circle of friends.  Hannah, Damian, and Chuck review hotel footage of where Charlotte stayed before she was killed. In the video, a man goes to see her in her room, the man appears fuzzy at first but once the image is sharpened it turns out to be Cornelius. Just when things were getting a little slow, the final scene of this week’s Designated Survivor has picked things up a little. I wonder what Cornelius was doing in the room with Charlotte and if he is truly one of the good guys in the White House.