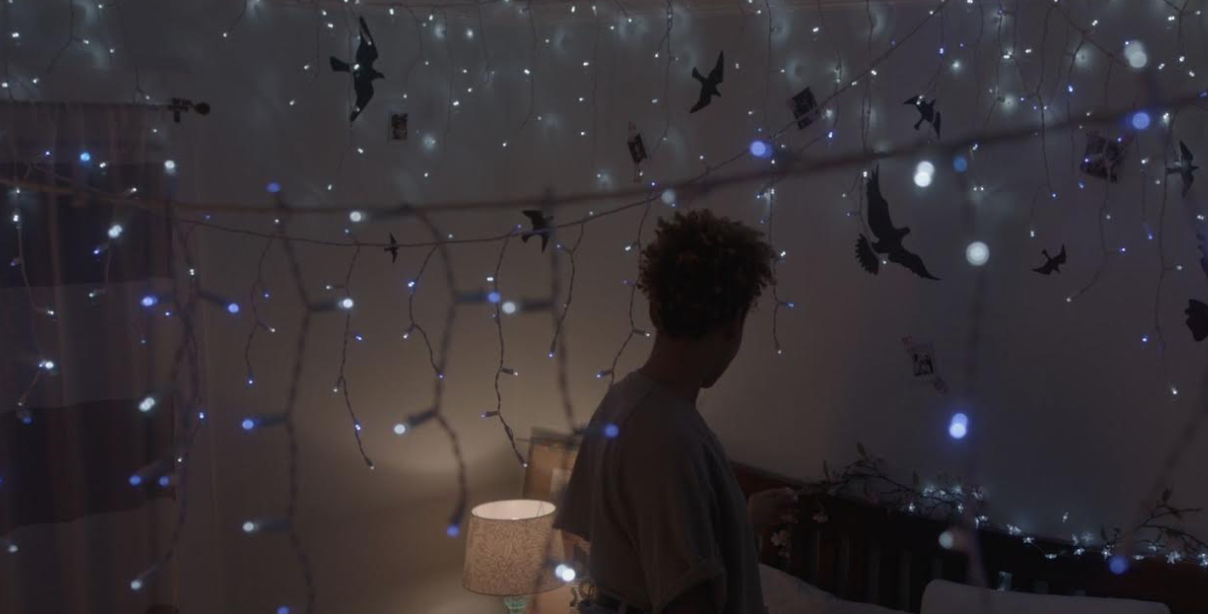 Every year, the American Black Film Festival (ABFF) showcases the best in independent film with Black themes. This year they are celebrating for over 14 days, offering hundreds of selections free on their site ABFFPlay.

Ten-Cent Daisy is a full-length feature by Lisbon Okafor. It’s subtitled “a lost mermaid tale,” and in many ways this is apropos. Starring the Dope Soprano Lauren Michelle in her first feature role as the titular Daisy, the film takes you on a dreamlike journey through what appears to be a waking nightmare.

The story unfolds with each scene. We see two women, Daisy (Michelle) and her sister Violet (Dionne Audain), where Violet tracks Daisy down on a local playground. We start to go through their day: Violet drops Daisy off at a cleaning job and seemingly non-consequential events start to act as pieces to a much larger puzzle. We’re introduced to the oldest sister Orchid (Ameenah Kaplan) and learn that all three are the daughters of Iris who has just been released from prison back “home” in the Caribbean West Indies. Iris was incarcerated for the murder of Pastor John Patrick, a man accused of raping Daisy when she was young.

Daisy, much like Moses, was found aboard a ship as though a gift from the sea. Iris took the baby, named her, and raised her as her own. As Daisy began to age, she displayed qualities that set her apart from other children on the island — qualities that made her a freak. Pastor John admonished her, calling her cursed, and the village shunned her as a product of the devil. After Pastor John’s assault and death, with Iris in jail, the three sisters flee to Berkeley, California. where they seek refuge with longtime family friend, “Queen” Meera (Margaret Laurena Kemp). Nicknamed “The Wicked Witch of the West Indies,” Meera may have been helpful, but she definitely has hidden and conflicting interests.

We also meet Otis (Jamal Ademola), a sort of friend and collaborator to Violet. It’s his studio that Daisy cleans, and Violet does odd jobs for Otis when she’s strapped for cash. Otis also suffers from debilitating blackouts and almost complete vision loss. This comes into play later as we see the depth of Daisy’s peculiarities. Rounding out the immediate cast is Zarah (Obinna Okafor), Daisy’s daughter sired by Pastor John that she insists on calling Lily. Zarah is being raised by Orchid with her longtime boyfriend, Rodrigo (Larvell Hood).

Finally, we have Inspector Albert Leonce. He was the inspector originally investigating Pastor John’s murder and was always convinced there was a piece to the story he was missing. Now he’s partnered with Meera to track down “exotic fish” that can only survive in the waters of the Caribbean, water she’s had transported to an aquarium in her patio.

There are a lot of moving parts in the film, and it works to both the film’s advantage and disadvantage. While the mysteries certainly keep you engaged and invested in the storyline, the reveals are timed confusingly so it’s hard to thread certain moments together.

There is such thing as gilding the lily. There’s already a semi-supernatural element at play and so much interpersonal conflict that some of the subplots only serve to be distracting. We learn of Violet’s music career but never hear her sing. We just know of a song she wrote called “Secret Garden,” which alludes to being about her mother and sisters and all of their flora-based names, but we never understand why it failed. Violet is bitter and angry through most of the film, and we never fully understand why she has maintained a chip on her shoulder while Orchid has found happiness and fulfillment.

The issue of Daisy is another thing entirely. I’ll admit, at the beginning, I wasn’t sure if she was differently-abled, homeless, or socially inept. And honestly, it took far too long to be set to rights. Michelle does a lovely job with her portrayal, but there’s a sort of arrested development to Daisy’s behavior that I’m not sure is as effective as it could have been.

In the ABFF production notes for the film, Okafor says the idea for the story came over 20 years ago when he was traveling to Grenada for his mother-in-law’s funeral. Okafor learned of a local girl who was ostracized by her family and community because of her “peculiarities.” A similar situation in Okafor’s village in eastern Nigeria occurred when a young girl with Down’s syndrome was bullied for years because people simply didn’t understand her differing ability. “The tendency to treat people we don’t understand differently is all too common,” Okafor explains.

While sharing his history as bedtime stories with his daughter, he was delighted to see how the more fantastical elements of his story gripped her. Okafor thought this presented a great opportunity to tell the diverse stories of immigrant women of color. To view Ten-Cent Daisy under this lens really brings out the whimsical elements to Daisy’s personality. Her demeanor is almost childlike and steeped in innocence, which we see stolen from her.

Michelle does a serviceable job of bringing a character to life who is complicated under the surface. As her first feature role, she showed no fear or timidity in her performance. Another standout performance is Ameenah Kaplan’s Orchid. She took to her life in the United States like a duck to water and is acting as a surrogate mother to Daisy’s daughter. She has an unmistakable charm that allows her to jump off the screen. Finally, Margaret Laurena Kemp’s Meera is such a fun anti-villain. She’s got a secret of her own, and she’s willing to do whatever it takes to get what he needs. Her performance is intense and mean and calculated and makes her a joy to watch.

Ten-Cent Daisy is worth a viewing if you’re a fan of modernized retellings of African myths. The film will be available for free on ABFF Play until November 21, 2021.