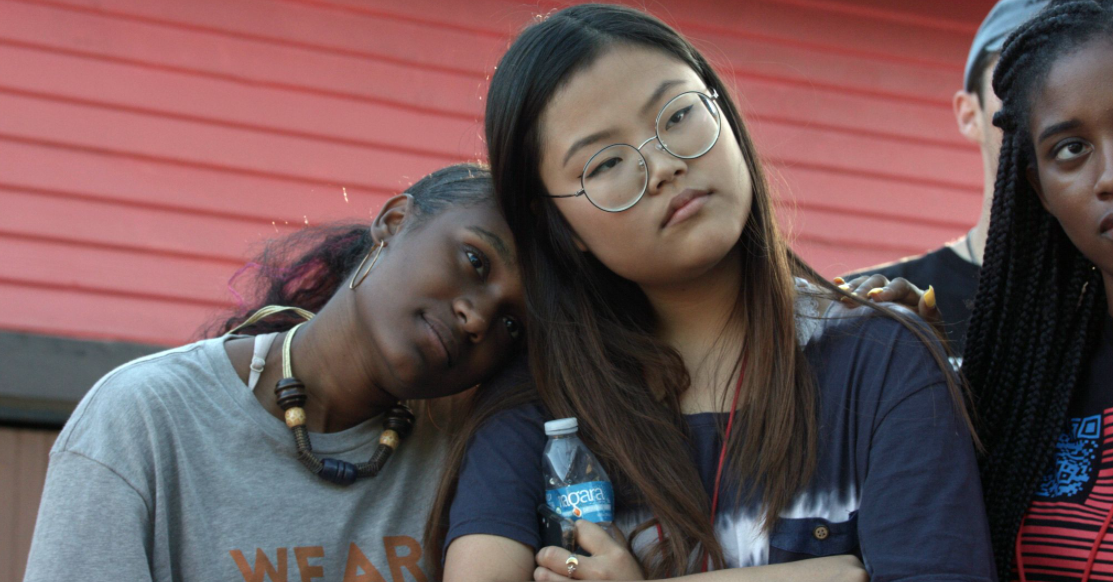 The film Us Kids documents Parkland school shooting activists on their 50-city March for Our Lives: Road to Change voter registration tour back in 2018. BGN spoke on Zoom with tour member Alex King, an anti-gun violence activist teen from Chicago, and the film’s director Kim Snyder about the experience.

Alex, what was it like speaking at the March for Our Lives rally in 2018?

King: Life changing, powerful, amazing, nerve wracking…  but I didn’t feel nervous until after I was done.  It was sad, the reason we were coming together, but at the same time it was lovely to see those many people come. The diversity in the crowd, to see, it’s not all Black people, not all people of color that are affected by this.

Kim, this documentary revealed the trauma these kids were processing during the tour. What was it like working on this film?

Snyder: I made a film several years ago about the tragedy in Newtown, Connecticut. I didn’t think I’d be making another film like that. I came out of that one really thinking a lot about kids and trauma. Who’s really asking the question of the cost of a nation of traumatized kids? When Parkland happened, it wasn’t surprising to me that there was this whole breadth of kids across the spectrum who were ready to be mobilized because they were traumatized. They could feel it more viscerally than I think a lot of the adult population. So it was like there was gasoline and the match just needed to be struck. I was drawn to the fact that this isn’t just some movement. There’s real emotion under here of kids who are scared, they’re pissed off. Rightly so. And they’re just in disbelief that we seem, as a culture, not to be able to do anything in a way that’s so disproportionate to other places in the world.

Alex, how did it feel to be able to be recognized by the Parkland kids and to partner with them as advocates in stopping gun violence?

King: It was nice to be thought of. The tour started in Chicago, and they came and marched with us in Chicago around the blocks where violence occurred. Then, at the end of that night, they asked me if I wanted to go on tour, and I’m like, I’ve never been on tour a day in my life. Let’s go do something. Go change the world. Actually getting on that tour, hitting those cities, hearing the stories from not only the Parkland students but the people from the different cities, seeing that we are connected and can help one another, was life changing. So how can we evolve from connections and better each other? How can I help you and your community when you’re 38 miles away? And how can you help Chicago when you’re in Milwaukee? It was powerful.

The tour required security because some of the Parkland kids were receiving death threats. How did that affect the group?

King: We knew some of the people who were on tour with us were high level targets. For some reason, people didn’t want them here anymore. When those threats started coming, we had to have each other’s backs. We let each other know that we’re here for each other. If anything happens, they’re gonna have to go through us before they get to you. Just having each other’s backs like that helped us and showed us we must be doing something right.

You started  #goodkidsmadcity this month.

King: #goodkidsmadcity is investing more into the community. We want to defund the police. Because, we feel like, most of our money shouldn’t go into policing. It should go more into our schools, our communities. When I was back in high school my freshman year, there were about 20 to 30 clubs that you could go to that you could join after school. By my senior year there were only about five. Our writing club left, chess club left. And it’s those extracurricular activities that keep us safe honestly. We want to bring those programs back.

Kim, what brought you the most joy while creating this powerful, powerful work of activism and art and humanity?

Snyder: Getting to know Alex and the other kids. I really cherish them. I learned so much from them still. The relationships I feel like are in some ways deeper after the film ends with the cameras gone. We spent a lot of time together off camera. We’ve had meals and all kinds of stuff.  At the march, I feel like there may have been cynics who thought that the whole inclusion thing may have been a little bit staged. Then, in going on the road, to feel that this had the guts of every great movement in terms of the authenticity of kids who realized that mass shootings are 2% of gun deaths and communities like Alex’s are the disproportion. That reckoning and that coming together with trauma is the common denominator. It was so hopeful to see these guys bond. As Alex said, they really have each other’s backs. That really felt hopeful. As you see in the movie it was, especially as we rolled through the South.

Alex, what brought you the most joy?

King: The times we weren’t on camera where we were being ourselves. Just making those connections and getting to know people. When you spend two months on a bus with somebody, you get to know a lot about them. I spent my 18th birthday on tour. In the midst of these traumatic events that we’re going through, we still find a way to smile, find a way to be happy.

Kim, did working on this project change you, as an individual, as a filmmaker, as an American?

Snyder: I feel “full on activist” about the issue. I get up in the middle of the night about it. I worry about these guys, I worry about the burnout, I get angry on their behalf. I feel like I’ve gotten very much more in touch with my rebellious self, and I like her. I’m a lot older than Alex, but I have as much to learn from him as he has to learn from me. I’ve been here longer, but he’s grown up in a time that has a lot to teach me. It’s all about mutual respect, whether it be age or gender or race. The film was made before COVID, the BLM protests, before the insurrection, before the [Chauvin trial] verdict (obviously), and it all feels so much more relevant. I feel like it’s more relevant than ever, and it’s dire. I just feel like, as X [Emma González] says at the end of the movie, “Everything’s connected to everything.” You can’t talk about guns without talking about all these other things. I’m proud that the film did really look at issues of racial equity and inequity. And so, the story goes on. We’re capturing a revolution.

Alex, you’re back home in Chicago, what are you doing to bring yourself some joy?

King: I create and listen to music, and I like to cook. I’m dedicated to work. As long as I can help others, it helps me.

Us Kids, a film by Peabody award filmmaker Kim Snyder, opens in theaters and on premium video on demand May 14, 2021.