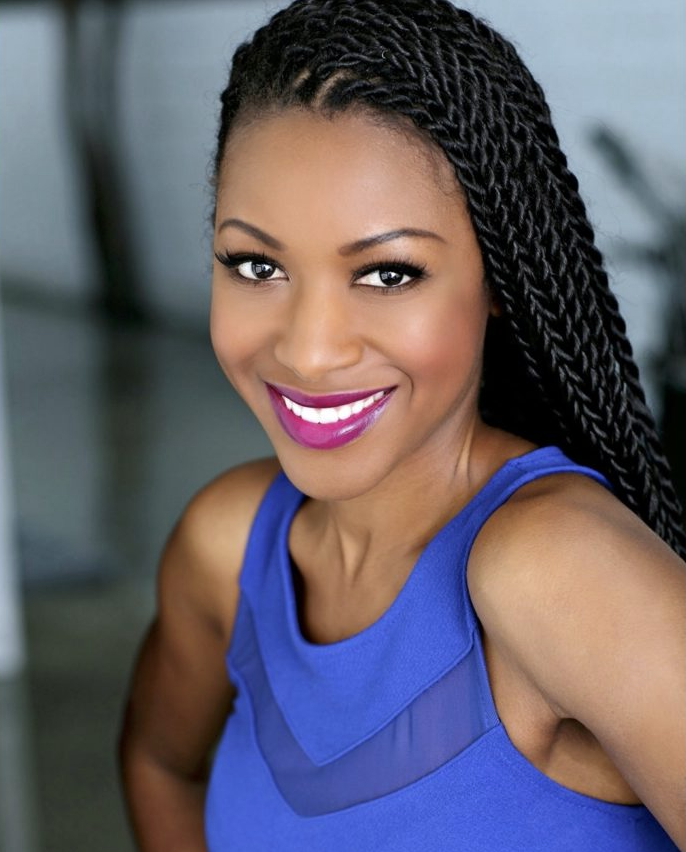 There’s an old anecdote that details how Black celebrities always resemble some distant relative. Is she Loretta Divine, or is she Aunt Tressie with her famous sweet-potato pie? Is he Denzel Washington or Uncle Otis who runs the car shop down on Ames? Our stars are our family, and Gabrielle Dennis is no exception. Whether you realized it or not, she was probably around during several formative years of your childhood.

Whether it was as a teenager watching her host on BET’s Teen Summit or her role as Treyvonetta in Bring It On: Fight to the Finish, Dennis is not just invited to the cookout, she’s the one who reserved the park and brought decorations.

BGN got to speak with Gabrielle about her career, some of her most memorable roles (you know we talked about Janay from The Game), and what’s next for her.

“I’ve always been a ham.” Dennis shares her mother’s words when asked about her love of entertaining. “She’d tell me that I was always trying to entertain people and make people laugh. She had the wherewithal to put me in dance class when I was four, and then I attended [Cincinnati School for Creative and Performing Arts] in fourth grade.” Even though she endeavored to be a ballet dancer, Dennis found her passion in a surprising place. After attending Howard University for a major in communications and working some smaller dead-end jobs, Dennis and her best friend worked for a summer at Six Flags. Being cast in the stage show Radioactive allowed the women to perform.

“We got to do Whitney, Destiny’s Child, Ricky Martin, Selena, all the top hits,” she says. “We were just doing these big-hit numbers, and I got that itch again. I knew I wanted to get back into [the] performing arts.”

From there Dennis decided to move, choosing between LA and NYC. Since the Carrie Bradshaw lifestyle was not in her budget, she decided to head for the sun-drenched skies of Los Angeles. After some humbling, typically Hollywood auditions, Dennis found her true footing in stand-up comedy. She says, “I loved it; it’s like free theater. Coming from that background, I looked at it like a live audience, so it was fun to get out there. I debuted at The Comedy Store and wrote stand-up and sketch, and soon, I got my first real job in LA with Damon Wayans in a show called The Underground for Showtime.”

At the time, the show wasn’t picked up, but soon Dennis’s career got a big break when she was cast as Janay on the hit show The Game. It was a bold role to take on at the time, and the character of Janay set to disrupt what was considered to be a happy home. “Had I known anything about the business,” Dennis says, “I would have gotten a publicist at the time. I started getting recognized, and people would be like, “‘What you doin’, Janay?’ and I’d be like, ‘Oh, they’re talking to me!’”

Janay is reminiscent of Jada Pinkett Smith’s role of Peaches in A Low Down Dirty Shame. “I’d be performing,” Dennis says, “and I could hear people in the crowd being like, ‘Is that that b*tch? Is she really pregnant?’ Like so extra!” Dennis played a similarly controversial role in HBO’s Insecure, where her character, Candice, holds the key to either being the co-conspirator or the cuckquean in the “open” marriage to her partner, Dro (Sarunas Jackson). Fans speculated heavily as they waited for someone on the show (Yvonne Orji’s Molly, in particular) to ask. Through it all, Dennis has appreciated every role.

“I finally got smart and started telling the clubs to introduce me by my credits,” she says, “so people would understand that I was an actress. I tried to avoid it, but it was how people knew me and what they wanted. And as soon as I began to talk about it, people really got into it. Janay is my Steve Urkel, and I love it.” That can-do attitude made an impression on a very important contact in Dennis’s career.

“I knew Robin Thede from the clubs and from performing,” she says. “I was hustling and doing everything I could. I had a lot of dramatic roles, but I wanted to get back into comedy. I even auditioned for SNL. But soon after that didn’t pan out, I got the call from Robin [Thede] for A Black Lady Sketch Show.” It was fortuitous in a way.

“She remembered me!” Dennis recalls happily of the call she got from Thede. “I can’t even think of a time when she would have seen me perform, but of course she must have been there. I was so thrilled to get the call. A Black Lady Sketch Show has opened this space that’s so traditionally ’white male’ in comedy. We get to play by our own rules, and we’re not limited to only playing the best friend or playing loud — we can do anything because it’s our space. We get to be the protagonist.” Thede’s vision has always been to create an all-Black women sketch show for years. She wanted to have performers in front of the camera but also Black creatives behind the camera, telling the stories and experiences that the Black community identifies with.

A surprise benefit of the role was the opportunity to direct for the first time. “I’ve always heard the saying, ‘Closed mouths don’t get fed,’” Dennis says. “While I wasn’t comfortable asking for things, I did find it beneficial to start speaking things into manifesting. I was talking with someone on set one day about how I wanted to do more writing and directing. A producer randomly heard me, and a few months later, I found out they’d recommended me to write a short movie.”

The short movie was Pay Day, Morgan Cooper’s 2020 Tribeca X winner. Dennis loved the opportunity and is now involved with the organization, Women Write Now, which is dedicated to encouraging Black women to write comedic screenplays. Winners of a screenwriting contest will have their films directed by herself, Bresha Webb, and Meagan Good, along with a first-look holding deal with LOL, Kevin Hart’s entertainment company.

Dennis says, “It’s important for me to give a hand up because I was given a hand up. And just think, the work from A Black Lady Sketch Show will inspire so many women, and these women and the art they create will inspire the next generation of comedic writers. I love seeing new talent expand and grow!”