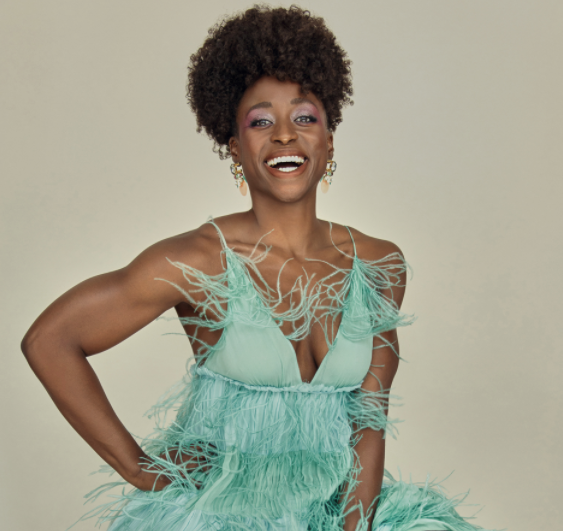 Paramount+’s Star Trek: Picard takes us to the year 2399, when Jean-Luc Picard (Sir Patrick Stewart) encounters a whole new galaxy of time-traveling adventures. Ito Aghayere plays young Guinan, a role originated by Whoopi Goldberg in the original series. Ito Aghayere is a gifted actor whose Broadway debut was in the Tony Award-nominated play Junk at Lincoln Center Theater. Aghayere has been working in TV and Film and has her MFA from Columbia University. Earlier this week BGN spoke with Ito Aghayere about what it was like to take on such an iconic Star Trek character.

How has your theater background impacted your work in television and film?

One of the things that theater brings is this sense of reverence for the written word of a playwright’s work. It takes years if not decades to formulate an idea and to craft it into this interactive experience for both the audience and the players. I think that that level of reverence is not often translated to TV and film because it moves so fast. The reverence I have for the art of writing, particularly the kind of writing in Star Trek: Picard, is something that I bring to each role I take on. When I first read the script, I didn’t know that it was Star Trek. I just read something that impacted me deeply. And I was like, “Oh, I need to tell this story right now.” I engaged with it as I would engage with a play. And I felt moved by what was happening between the characters.

What was the audition process like, and how did you feel when you landed the role?

There were several rounds of callbacks, so I didn’t know the role was young Guinan until maybe a couple of days before my last audition with producers. Up until that point, I was just like, “It’s this girl named Gwen, and she is being hassled by this guy named John.” When I discovered it was Guinan’s origin story, essentially, I mean, to put it frankly, I flipped my sh*t. You don’t often as an actor get the chance to act in something that you watched as a kid. That role was iconic. Whoopi was in maybe 22 episodes out of multiple seasons, and she stole every scene that she was in. That character had such a positive impact on me — a Black nerd when I was a kid, with braces till I was a freshman in college. It wasn’t cute. To have an opportunity as an actor, 20 years later, to play a role I was already familiar with and create a backstory is just the privilege of a lifetime. And then to work with such incredible people, some of whom worked on the original show? Amazing.

What was that like working with Sir Patrick Stewart?

Our first scene filmed together wasn’t chronologically the first thing in the episode. I had to, essentially, have had the whole arc of the episode in my mind. It was very nerve-wracking for me to meet him because I was like, “If he’s this very standoffish, hard-to-read kind of guy, this will be hard.” Patrick Stewart couldn’t have been more the opposite of what I feared. He just imbues this generosity when he works with you, and I wasn’t ready for that. Sometimes people who have been in the business for a long time, especially when they’re in their 80s, may need to keep their guard up, create distance. I understand that. Do you. But he wasn’t like that at all. He’s been around the block, and yet he was so welcoming. He didn’t have to be as kind and as warm and as endearing as he was. He wanted to see who young Guinan was, and there was so much nostalgia. In the first moments that we had together, he was like, “It’s you. It’s you.” And I was like, “I guess it is me.”

What’s been the most surprising aspect of playing this character for you?

How accessible she feels to me as an actor. There are certain roles that if you originate the role, you create it from the ground up. You create her mannerisms, her tics, her physicality for yourself, and there’s a sense of organic oneness as the actor shapes the role from the inside out. This character was a little bit more outside in for me. Once I knew I was playing young Guinan, I connected with her angst. The most surprising part of stepping into the role of Guinan has been just how familiar she feels. It might have to do with the fact that like as a kid, I loved Whoopi as Guinan. So I didn’t expect that it would feel so good to fill her shoes and to embody young Guinan in my own way. That was kind of a delightful surprise.

How has the process of transitioning from New York actor to LA actor been for you?

My now husband and I were in a bi-coastal relationship. He lived in LA; I lived in New York. When I moved out to LA for this show that I was working on with CBS, Carol’s Second Act, he was already here. So I didn’t have as hard of a time as he did coming out here. We went to grad school together at Columbia. He’s a writer and had a much harder time establishing himself here for the first year, but I had the benefit of him doing the groundwork. We created a working group here for any artists who just want to show their work. During COVID it got really hard, but my community has definitely supported me. And finding a good church community that’s about love, justice, and creativity were vital. It’s been really rewarding to feel like what I found in New York can be cultivated here.

I’ve been volunteering at the Saint Francis Center. It’s this kitchen that provides a lot of meals, food boxes, and grocery boxes for the unhoused community in LA. With everything that’s going on in the world, I’ve found a lot of peace in the chaos by choosing to serve in ways that require me to turn off all the chaos. That’s been anchoring me.