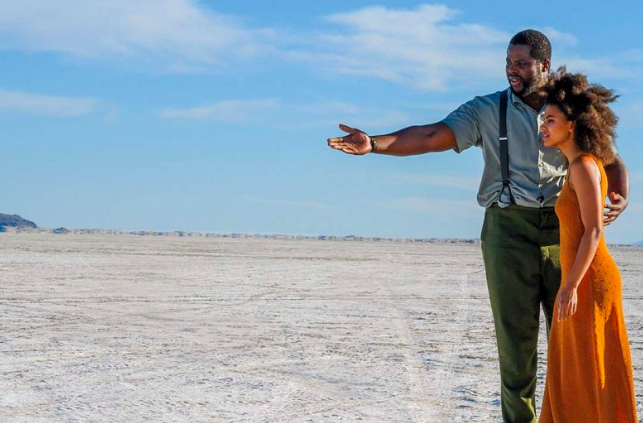 There are tons of films about birth, life on Earth, and even death. But what about before you are born? Artists are putting their imaginations to the test and giving us creative answers to one of the biggest human mysteries. While we can look forward to an animated version of “The Great Before” in Pixar’s Soul, we now have a very realistic approach to the before-life in Sony Pictures Classics’ Nine Days. Writer and director Edson Oda makes his feature film debut with a heartfelt and refreshing approach to what happens to our souls before we are born. The cast is wonderful, and its theme shows a passion for self and the things that life has to offer.

Nine Days is a fantasy drama starring Winston Duke (Black Panther, Us) as Will, Zazie Beetz (Joker, Deadpool 2) as Emma, Benedict Wong (Doctor Strange, Avengers: Infinity War) as Kyo, Bill Skarsgard (It, Castle Rock) as Kane, Tony Hale (Veep, Toy Story 4) as Alexander, Arianna Ortiz (This Is Us, Jane the Virgin) as Maria, and David Rysdahl (That’s Not Us, Stay Awake) as Mike. The story follows Will as he spends his days watching people on a variety of TV sets, recording segments of their life. When one subject dies, there is a vacancy for someone new.

The film introduces the audience to five unborn souls — Emma, Kane, Alexander, Mike, and Maria — who go through a series of interviews with Will over nine days to determine which one can be given life on Earth. The characters in this film are diverse and unique. It makes for a pleasurable experience for the audience to guess which soul gets to be born and why.

From afar, the cast seems to be a random collection of Hollywood that wouldn’t be your first pick to put together in a movie. But, the cast is the jewel that makes this film shine. They have different personalities and acting abilities that work very well together. They all convey personalities audiences can connect with one way or another. They all have the same goal, to be chosen as the next to be born.  When we do not know the criteria or the rules, the interesting moments come from the characters’ reactions to what they hold on to throughout the nine days. The film also gets the audience to acknowledge what moments they hold on to from life as well.

Beetz portrays Emma as the perfect blend of curiosity and innocence. She gives a performance that is lovable and believable, while the ensemble cast as a whole is strong. While the chemistry between some may have been a little off in some scenes, overall this ragtag team of characters is refreshing to see on screen. Duke gives us a conflicting array of emotions that works for his character, who is supposed to be another “a cog in the wheel” but also an important part of giving life on Earth.

Nine Days is a rich representation of cinematic voyeurism. In the film, Will is actively watching people on TV screens without their knowledge and interpreting everything he sees. Emma is consistently watching Will, drawing conclusions of her own, and he does not know it. The audience is watching Emma, Kane, Alexander, Mike, and Maria judging and rooting for their pick to be born. There is even a small nod to the idea of voyeurism in dialogue from Wong’s character, Kyo.

Nine Days showcases voyeurism performed by Will as an addition to the stream of consciousness. One could compare him to Jeff played by James Stewart in Rear Window. A large take away from Nine Days is that seeing something is not the same as understanding it. We see people, but we do not truly understand what is going on in their lives and can be surprised when we learn it is not all blue skies and rainbows. This sort of active participation from the audience is what makes this film enjoyable, if not unique.

While the themes and cast of the film may be great, Nine Days is not perfect. The first half of the film sets up the audience for a very visual experience initiating an inward, emotional response. But, it loses its footing, and the pacing is off, not to mention it also has a super slow momentum. The story awkwardly switches from visceral to cerebral. The dialogue, in the beginning, is a bit tedious. While the nine days should signify some growth, intellectually, of the five souls, the switch is disrupting to the viewer. I will say the second half of the film is more satisfying than the first, so be patient if you feel the urge to stop watching in the beginning.

Nine Days is a commentary on the human experience and the beauty of the individual. It is both a film about experiences as a group and the experiences as an individual. This idea solidifies in the end with a compelling performance of Walt Whitman’s “Song of Myself”. It’s a film that makes you think about yourself and your place among nature, people, and the world. It would be a great film to see turn into an episodic series.

AFI 2020 Review: ‘The Boy Behind the Door’ is a Sad and Stressful Film to Watch