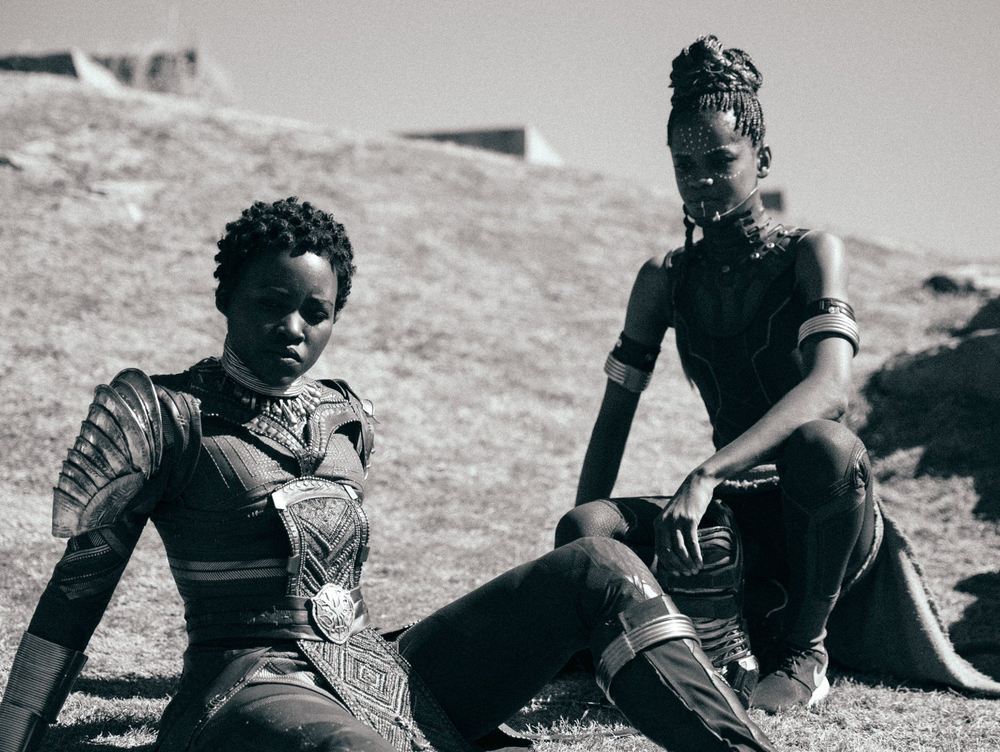 Watching Marvel’s Black Panther for the first (and second) time, I reveled in the unapologetic Blackness of it all. With Black women, loved and respected, at the center of a narrative that embraces Afrofuturism, it is a wonder when we realize that this character and world were originally created by two white men, Stan Lee and Jack Kirby. Yet, this Black Panther is not theirs. This Black Panther is uniquely absent of the white gaze. Lee and Kirby may have envisioned this character, but it wasn’t until Black writers and artists connected with the blueprint that it became not only Afrofuturist but truly Black.

Although we often credit the creation of the word “Afrofuturism” to white cultural critic and writer, Mark Dery, the discussions about Afrofuturism can be traced back to the early 90’s, to a Black woman named Alondra Nelson who writes about science, technology and inequality. And in truth, Afrofuturism can be traced back even further to George S. Schuyler’s 1930’s satire, Black No More: Being an Account of the Strange and Wonderful Workings of Science in the Land of the Free, AD 1933-1940, in which a scientist develops a pill that changes Black pigmentation to white.

We can trouble the use of the word Afrofuturism because Mark Dery is a white man observing the writing of Black science fiction authors. But I caution that line of thinking; certainly we may one day opt for a new word to describe what it means to write Black-centered speculative and science fiction narratives like Black Panther. But Dery was not attempting to write Afrofuturist narratives; he was only trying to propose the question, “Why do so few African Americans write science fiction, a genre whose close encounters with the Other—the stranger in a strange land—would seem uniquely suited to the concerns of African American novelists” (Dery 179-80)? This question is slowly but surely being answered as more Black writers are taking up the mantle of science fiction, speculative fiction and fantasy.

Lee and Kirby had a good idea. Black Panther was the first Black superhero in mainstream comics. And yet, even in creating an iconic Black character the missing piece was “Black cool.” White writers cannot write Afrofuturist narratives because they cannot truly envision Afrodiasporic futures based on Black lived experiences. While Lee and Kirby’s creation of the Black Panther helped to bring increased Black readership to comics, their lens on Blackness is from a colonizer perspective.

The introduction of Black writers to the Black Panther comics such as Reginald Hudlin, Ta-Nehisi Coates, and Roxane Gay gives the character and the world the element of not only Afrofuturism but also “Black Cool.” Rebecca Walker talked about the phenomenon in her edited volume, Black Cool: One Thousand Streams Of Blackness. This “cool” is everything from “keeping your cool,” in the face of oppression—the cool needed to escape slavery, build culture and identity out of fragmented memory—to “cool” in the sense of “who got next”—visualizing a future based on the resilience of Blackness. “Black Cool” defines Afrofuturism. We see it in the music and cover art from Parliament Funkadelic to the visual style of Janelle Monae. “Black Cool” is an aesthetic that cannot be replicated by anyone outside of the Afrodiasporic community.

Which is why in comparison to its beginnings, Marvel’s Black Panther offers an Afrofuturist vision of a world in which the scourge of colonialism never touched the land or the people. For myself and my friends, it offered hope and wonder. An opportunity to have conversations that seemed impossible before Black Panther. Conversations that needed to happen across the Afrodiaspora now seemed possible because, within the character of Killmonger, our Black immigrant cousins could hear the how systematic and institutionalized oppression of Black folk in America manifests itself. We are not lazy and we are not ungrateful; we are slowly being driven insane by a racist country that deems our Black bodies more like machines and commodities than human.

Through the confrontation between Okoye and Nakia after Killmonger ascends to the throne and the mantle of Black Panther, we are able to have a much-needed conversation between Black women about what it means to protect not just the idea of Blackness but actual Black people. But now we can also have a dialogue with Black men about trusting Black women and addressing the problem of misogynoir in our communities. And with the #TeamKillmonger vs. #TeamT’Challa debates, there are discussions happening across and outside of the internet about classicism, elitism, and toxic masculinity. Afrofuturism at its best forces Afrodiasporic people to reckon with the ways in which colonization has impacted our identities and envisions futures where the “isms” colonization created are destroyed and schisms healed.

The team who created Marvel’s Black Panther, Ryan Coogler (director/co-writer), Joe Robert Cole (co-writer), Nate Moore (producer), Ruth E. Carter (costume designer), Hannah Beachler (production designer), and the brilliant Black cast who were pulled from nearly every corner of the Afrodiaspora helped the audience imagine a place that does not exist for Black people: a place where White people have not touched the land, the people, the language, the culture. A place where Black excellence is centered and honored. A place in which Blackness in all of its magnificence is centered. It is not just Afrofuturist because Blackness is centered. It’s Afrofuturist because the most intelligent human being in the world is a young Black woman named Shuri. It is Afrofuturist because technology and ancient culture collide to create a modern-day wonder in which lip plates and scarification are as in fashion as hover trains. It is Afrofuturist because there is ancestor worship and ceremonies in which kings are chosen in the same breath as Okoye noting that guns are “so primitive.”

Afrofuturism is a sort of time travel. In Marvel’s Black Panther, vibranium lives alongside ancient ritual, language, and culture. Afrofuturism is built on the richness of Black lived experience. A White writer may be able to envision a future where Black people are centered or dominant. Maybe. But they cannot write Afrofuturism because it is about our lives as narrated by us; Afrofuturism is how the past and the present of Black folks across the globe speak to one another and come together to imagine a future driven by our visions, hopes, and dreams.

Schuyler, George S. Black No More: Being an Account of the Strange and Wonderful Working of

By S.D. Chrismon, an Afrofuturist, pop culture junkie who lives with her partner and two weird cats in Minnesota. She published her first book, Bright City, under the pseudonym dc edwards in 2017. You can follow her on twitter @studpoet.