Yes, I am an Alamo Drafthouse Fangirl.

I “Stan” so hard for the Austin-based theater. So when I got the opportunity to watch the new horror-thriller, It Comes At Night at the Alamo Drafthouse, I immediately said, “Yassss, queen!” I did not waiver when it was revealed that A24 and the Alamo Drafthouse had invited me to see the film in a uniquely frightening experiential environment.

Texas-based filmmaker Trey Edward Shults’ highly-anticipated horror film It Comes At Night was shown to a group of lucky horror fans at an undisclosed location in the wilderness outside Austin. It Comes At Night is a post-apocalyptic tale that follows a family locked away in a desolate home in the middle of the woods as an unnatural threat terrorizes the world. The film explores not the horror of the end of the world, but rather what horrors can make the end of the world seem inconsequential.

I arrived at the new Mueller location of the Alamo Drafthouse and was provided a ticket to grab a beer. As always, the Alamo knows that alcohol can enhance the cinematic experience. I found a spot by the bar and chatted up with some local Austin Journos, waiting for the call to head out to the Rolling Roadshow. Unlimited to just the brick and mortar locations, The Alamo Drafthouse will do ‘pop up’ screenings at various locals. When it was time to go, all the attendees piled onto buses. Tour guides decked out with gas masks and clothing right out of the more dismal moments from The Walking Dead escorted us.

To clarify, this is pre-Alexandria wardrobe, kids. 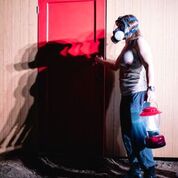 The guides informed us they didn’t know what the air was like out there, so we were given surgical masks during the bus ride. We then rode an hour outside of town and disembarked into the darkened woods. I was keenly aware that I was currently experiencing a textbook setup to a found footage film, but I was hoping for a big payoff.

I’m happy to report the payoff was more than worth the setup. Out in the woods with more beer, (yeah) and a completely silent clearing, was the perfect place to experience the film. Just like Director Shults’ vision, the experience was unique, captivating, and terrifying for the entire 97-minute runtime. When we sat down with Shults’ the next day, he explained why he was interested in making the Alamo screening the second one for the film. 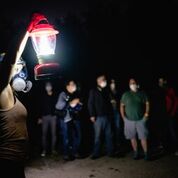 “Drafthouse is so cool. I love the way they supported [the film]”. Shultz confessed when they first pitched the idea to him, he said yes, but then twinges of doubt quickly surfaced. “My first thought was ‘this is awesome,’ then the insecurity starting kicking in. What if the sound sucks…but beyond all that, it was very surreal. It was amazing that anyone would go through all that to watch [my] movie. That was cool.”

In his sophomore effort Shults is surgical with his exposition, or should I say lack of exposition. The film is brilliant for all it leaves unsaid – not necessary unexplained or unaddressed – simply unsaid. I asked Shults how he was able to craft a script with so much detail and minimal dialogue. “Well, I don’t consider myself a writer. I get excited by films and storytelling that aren’t your norms and leave questions. I love being thrown into a story, not knowing everything and playing catch-up…that is what I’m drawn to [create]”.

Each element of the film, leaves breadcrumbs to the truth, hints at secrets, or alludes to deceptions from every angle. Brought to us by A24 It Comes At Night stars Joel Edgerton, Carmen Ejojo, Riley Keough, and newcomer Kelvin Harrison Jr.
It Comes At Night opens nationwide in theaters June 9th.

Alamo Drafthouse Tries to Heal the Wounds of Charlottesville Through Film

Interview with Carmen Ejogo and Kelvin Harrison Jr. of It Comes At Night

Interview with Carmen Ejogo and Kelvin Harrison Jr. of It Comes At Night