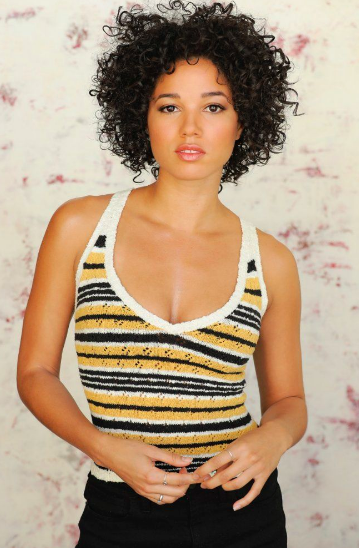 Today Netflix releases one of the highest anticipated series adapted from a comic book — Raising Dion.

Four years have passed since a short film went viral spinning everyone into a frenzy over a young Black boy with magical powers and his single mother doing everything in her power to protect him.

Raising Dion, based on the comic book of the same name by writer Dennis Liu and illustrator Jason Piperberg, is a new Netflix series adapted by TV showrunner Carol Barbee. This mythological and magical tale with a Black child at its center is refreshing and needed. Actor Alisha Wainwright is no stranger to the world of science fiction, having spent her time playing Maia Roberts, a werewolf on the Freeform show Shadowhunter. This time she steps in a maternal role as Dion’s mother Nicole — a single parent who does everything in her power to keep her son safe.

BGN had the opportunity to speak with Wainwright about playing Nicole, working with Michael B. Jordan, and what kind of impact this series will have on its viewers.

Tell us about Dion’s mother Nicole. Who is she and will we learn about her in this series?

She is a former professional dancer who falls in love and has a son. Life is going beautifully until her husband passes away. Not only that, but she’s struggling to make ends meet. Her son is having difficulty making friends at school and just finding his place in the world. So when you see Nicole, she’s kind of on the downswing in life. She’s defeated, deflated. On top of all that, her kid has superpowers. It’s not something immediately to be celebrated; it’s something that she’s scared of and what it’s like for him to just even do basic things like go out in public. So she’s scared. The whole series is her learning to relax and let go and trust that he will have good intentions and be his best self. I think that’s a metaphor for motherhood in general.

When you were offered the role, did you read the comic book at all? And how did you prep for this role?

I was fortunate to read the scripts of the pilot. And then I read for the role and knew pretty early on that it was going to work out. The response from the producers and the showrunner Carol Barbee made me feel really confident that what I had envisioned for Nicole aligned with what they had anticipated for her character. Just before that conversation I had with the showrunner, I was talking to a friend about this role that I thought I was going to get. She was like, “Oh, yeah, I saw that trailer. It was so cool and it went viral.” And I was like, “What are you talking about?” I had no idea because I live under a rock. I went home and my eyes were just hungry to learn more information about this character. The concept that Dennis Liu created is very similar to the pilot, but it read differently. So it was great to have kind of the foundation for what Carol Barbee took and made [into] the show. I had a unique privilege of being able to see the show first and then look at the source material.

The scenes between you and Ja’Siah Young felt so organic and real. How much time did you spend together while shooting this?

They brought us up about a month before shooting, because I had to start my dance training. We just needed to acclimate to some of the basics of filmmaking. We did a lot of improvised scenes. One of the executive producers, Seith Mann, took us to a park, and we would improvise these little scenes. For example, he took us to an arcade. I went with Ja’Siah. What he meant to do was only give me $20 so that it would run out really quick. But we were in Atlanta, Georgia, and every game was like 75 cents. So we ended up being there for so long, so we could run out of money.

ALSO READ
Michael Beach Fights for His Soul in ‘Immanence’

And sure enough, once that $20 ran out, I was trying to get Ja’Siah to leave. He was not having it. A perfect example of what parenting is. Once we started shooting, I didn’t have time outside of shooting to spend with him because he’s a kid. He only has four hours of shooting time for a day. And then he has hours for school and playtime and all that stuff. So you don’t see each other unless you’re shooting. But I’m glad we had that month of preparation because I really feel like it created a foundation.

Did you have a favorite scene between the two of you that resonates with you the most?

There’s so many. I can’t remember what episode it is, but one of my favorite ones is when my character Nicole gets a promotion at her job. So she orders pork chops, and she’s making this big meal and she’s dancing in the kitchen. She’s so excited. And then Dion runs in. He can tell something good is happening because he smells tasty food and he sees his mom smiling. So we start dancing together in the kitchen. And it’s just so sweet. Because he’s so goofy and fun. When you see him smiling and laughing, it’s all very genuine. He’s not a trained kid actor, so when you’re seeing him, you’re seeing Ja’Siah.

Michael B. Jordan stars as your husband in this series, but also is a producer. Did he offer any feedback for you as an actor while working together?

No. I think he was, you know, respectful of what I was bringing to the table. We just collaborated seamlessly. I wanted to keep things as organic as possible, and so did he. Luckily, we have great chemistry on set. So it made it really easy to kind of slip into those characters.

As Hollywood continues to ride the reboot train, Raising Dion offers a refreshing new story for audiences. Why is this particular story important to tell?

Number one, you have a little Black boy as the center of the story. I know that little Black boys out there are hungry for content that shows a reflection of themselves. I know I was when I was growing up. I am so proud to add another story to the zeitgeist that people in my community can appreciate and use as a role model. You’re also seeing a lot of superhero stories that are from the perspective of the person with the powers. It’s really fun and refreshing to see the story from the perspective of the person who has to take care of that person. It’s challenging. It’s not easy, just like real life, and now you have to manage a kid who can move things with his mind when he feels like it. That’s really scary. I like that Raising Dion is grounded in the realness of the consequences of that. I hope that people will see that this series kind of sets us apart from other [shows] that you see in movies and in the genre.