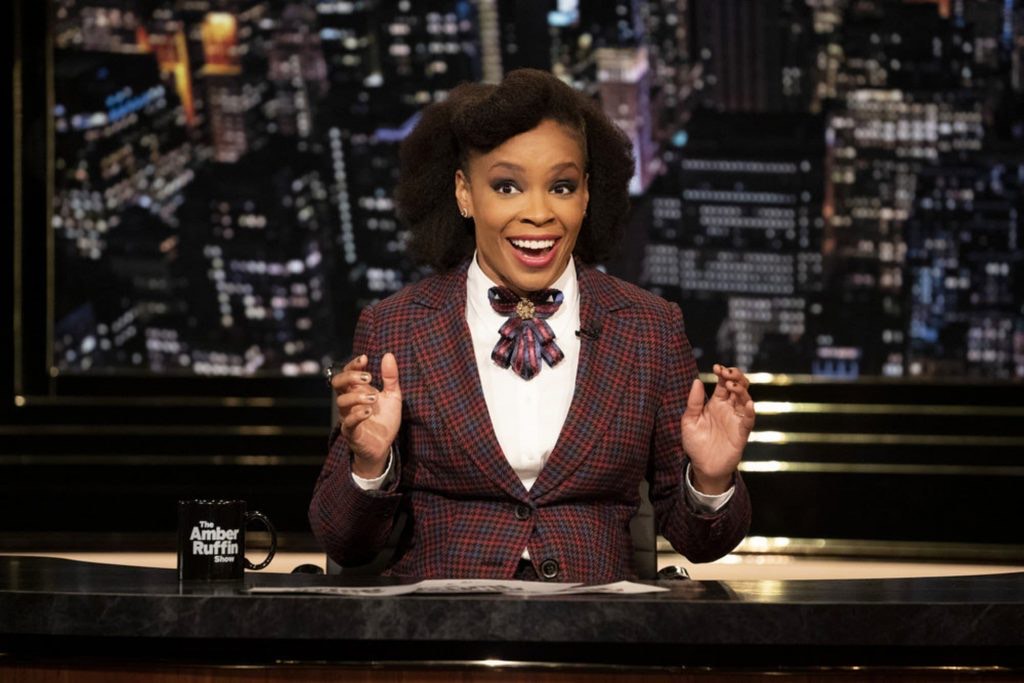 How many Black women have you seen on late-night television? Other than guests or on a segment like Saturday Night Live, which has even more scarce appearances, Black women have been consistently missing from this one segment of entertainment journalism.

The Amber Ruffin Show is a late-night show that is exclusively shown on Peacock, the NBC Universal streaming service. In this show, Ruffin takes the news of the week and delivers it using her unique form of wit and charm and a good helping of sarcasm. She also incorporates fun segments that educate people on issues of race, feminism, and other historical political issues.

Ruffin was born in Omaha, Nebraska. She first started her career as a theater and improv performer in Omaha. From there, she moved to Chicago at the encouragement of iO Theater owner, Charna Halpern. Ruffin then followed opportunities to write and perform comedy in Amsterdam for Boom Chicago Amsterdam, where she says her career started. She then worked in Denver, back in Chicago, and finally Los Angeles.

While in Los Angeles, Ruffin worked with other improv and sketch comedy shows such as Key and Peele, Story Pirates, and the Sacred Fools Theater Company. In 2013, she auditioned for Saturday Night Live as a part of their effort to include more Black women in their show. The audition was unsuccessful, but a few days later Seth Meyers called on her to be a writer for his new late-night show.

Ruffin has discussed her experiences with Late Night with Seth Meyers favorably. In her interview with Amanda Seales on the podcast Small Doses with Amanda Seales, Ruffin talks about how Seth allowed her to be herself. Whereas in other jobs she felt obligated or was demanded to hold back her creativity or honesty, Seth wanted her uniqueness to shine. She not only wrote jokes but had opportunities to appear on the Seth Meyers show in segments such as “Amber’s Minute of Fury” and “Amber Says ‘What?’”

When she’s not writing for Late Night, Ruffin has also written for Detroiter on Comedy Central Show, A Black Lady Sketch Show on HBO, and even was a narrator for Drunk History on Comedy Central.

On January 16, 2020, it was announced that Ruffin would host her own late-night talk show. According to the podcast interview, Ruffin submitted a proposal to NBC at the encouragement of Seth Meyers and was declined initially. A year later, NBC returned to ask if she was still interested in the show for the Peacock app. The show premiered on September 25, 2020. Because the show premiered during the Covid-19 pandemic, there was no live studio audience. Nevertheless, her performance never suffered. She still gave an amazing show with her trusty sidekick, Tarik Davis. It wasn’t until Episode 31 (August 13, 2021) that she was finally able to record in front of a live studio audience, which only enhanced an already amazing show.

With her amazing, suits including her custom, snappy bow ties, Ruffin has taken on topics such as Black Lives Matter, the Insurrection, anti-vaxxers, and even lesser-known stories such as the drowned Black cities and colossal failures in allyship. She incorporates her unique style of comedy and silliness into intellectual topics and is actually good at it. Also, she still writes for Late Night with Seth Meyers.

To top it off, Ruffin and her sister Lacey Lamar coauthored a New York Times Bestseller entitled, You’ll Never Believe What Happened to Lacey: Crazy Stories about Racism. This book is a compilation of Lacey’s experiences of microaggressions and overt racism while at work and in life. The two share stories that would blow your mind if they weren’t actually true.

Amber Ruffin’s career is definitely abnormal for Black women in this space, but that is the beauty of it. She has put in the hours, work, and time needed to earn this position. Nevertheless, what sets her path to success apart is that she hasn’t had to sacrifice her authenticity at the top. She, like powerhouses such as Ava DuVernay, Amanda Seales, and Issa Rae, has curated a career that allows her to do what she wants and needs to do while still being authentic to herself.

Ruffin credits working with men like Seth Meyers, who saw during his time on SNL how people were being held back and didn’t want that for his show. Nevertheless, to her credit, she is just an amazing, creative writer and performer. The thing that makes her the epitome of a Black Girl Nerd is the fact that she is authentic to herself. She shows her interests and concerns for things that are not in the public eye unapologetically. She is also funny, entertaining, and educational.

Season 2 of The Amber Ruffin Show premiered on October 8, 2021. In the show, she discusses the racial biases in credit scores and “How to Get Mad Like It’s 1995.” It is definitely affirming to see her succeed while being authentic to herself. She didn’t have to straighten her hair. She didn’t have to be ultra-feminine or code-switch. (She also talks about code-switching after returning to in-person work.) She’s sarcastic and honest. She called a racist a racist, a transphobic person transphobic, and a misogynist a misogynist. She does all of this in the face of those that would call her “aggressive,” “full of attitude,” or any other nonsense that could be used to invalidate her experience.

Armed with a mission to “de-gaslight people,” Ruffin has done and continues to do the work to educate and entertain the masses while giving space for people who look like her to “Mhm” and agree in the background. In addition, her show and her success give Black women the courage to be more authentic in their own daily lives. Her book with Lacey allows other Black women to laugh in the face of microaggressions and empowers them to keep records of their own experiences and use their voices.