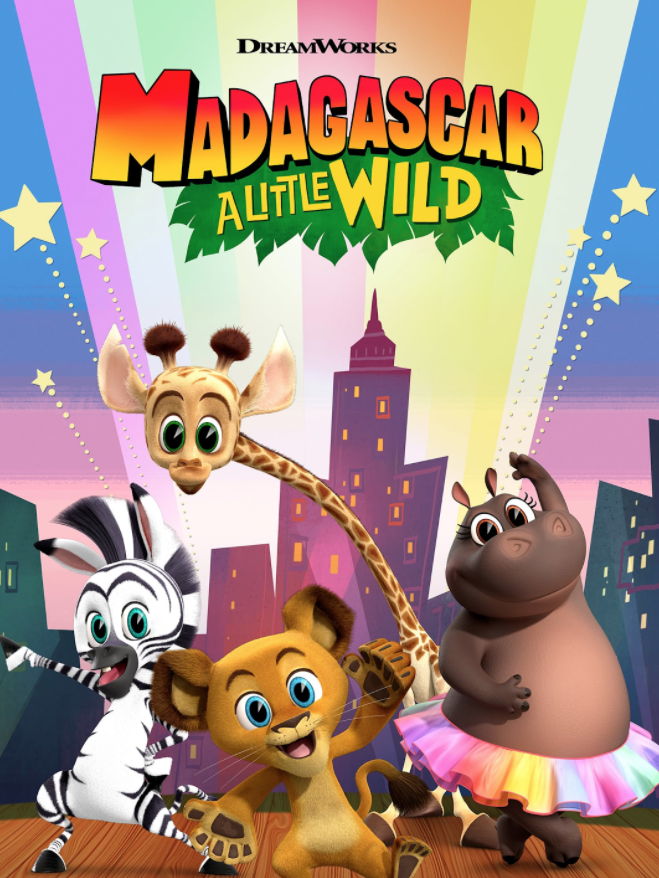 Dreamworks’ Madagascar: A Little Wild is back with Season 3. Our favorite characters, Marty, Gloria, Alex, and Melman, are up to new and hilarious antics, as usual. Zookeeper Kate is there to reel them in from their misadventures as they continue to grow and learn, teaching their fans life lessons as they go. Marty, Gloria, and Kate are voiced by Amir O’Neil, Shaylin Becton, and Jasmine Gatewood respectively. They bring fun, youth, and adventure to the young versions of characters we’ve been fond of for quite some time.

BGN had the chance to have a Zoom interview with O’Neil, Becton, and Gatewood about voicing these beloved characters, the best part of working on an animated series, and lessons learned.

Were any of you fans of the Madagascar films before you started working on the animated series?

Amir O’Neil: Definitely. The movie is so iconic. I think everybody’s watched it at least once in their life. I was a huge fan of the movie. I like to move it, move it. So yeah, I was a huge fan.

Jasmine Gatewood: I love animation, so I was watching the movies. I love Madagascar and of course I like to move it, move it. Yeah, it’s always been great. Now, to be on it, you’re like whoa, this is like a dream come true.

Shaylin Becton: I would definitely have to agree. That was my favorite show to watch with my grandma when I was younger. We would watch that show religiously, back-to-back, and Gloria was actually always my favorite character. I’ve watched every single Madagascar, so to be on it and then play the baby Jada Pinkett is amazing. For my grandma to be able to watch it knowing that we watched it when we were younger, she is so proud, and that just makes me so happy.

What do you bring to your characters that may be different from the movies?

SB: I would definitely say youthfulness. Obviously, because we’re the younger characters. I’m still learning each day because in every episode Gloria and all the other characters are learning, so they’re still growing up. Whereas the older versions, they’ve experienced life as their animal. In the movie version, Gloria is like the mother to the rest of the gang. She knows it all. But with me, even though I’m trying to know it all, I’m still learning each day. I feel like that’s just something in general that I would say is very, very different between the adult version and the younger version.

JG: And with Kate being their zookeeper, and just being able to nurture them in their youth, being able to see them in their beginnings, being a part of that foundation before they got to the adult Madagascar is really awesome. I think it’s awesome that they took us back so you can see, this is where they started, this is who they were, they didn’t have it all together. Even as adults, they still didn’t have it all together, but this is who they are. These are the loving characters that you’re able to learn from and grow with before you get to see them be all big and grown.

What’s the best part of working on Madagascar: A Little Wild?

SB: I would definitely say the people who we work with, the cast members like Amir, Jasmine, Luke, Tucker, everybody’s just so amazing. The production team, the music team, the producers and the writers, and the directors, Charlie and Joanna, and everybody’s just so, so nice. Sometimes going on set, that’s not always the case. Every time I go, it’s not like I’m doing a job, it’s like I’m at home. It’s literally like I’m with family and friends, so I think that’s the best part. Meeting new people, networking, and just forming new friendships has been amazing.

AO: Yeah, I agree. Everybody on Madagascar is just so great and I love them to death. They’re the best group you can ask for. They’re perfect.

JG: I say that all the time when I’m going into the studio. Everything is on Zoom now, but just being able to see them, work with them hands on, the engineering crew, everybody is just so amazing. Like Shaylin and Amir said, it’s such a loving and inclusive environment where they allow you to just be you. They allow you to play, allow you to have fun, and there’s not anybody that’s like, “Do it like this,” or “Do it like that.” No, they see what you can do, and then they’re like, “Let’s try it like this.” It’s beautiful how they help you, and you get to enjoy the process. It doesn’t feel like working. Man, do I miss passing these two in the hallway when we used to before COVID and being able to say hi and see them.

What’s the best lesson you’ve learned by participating in three seasons of this show?

SB: I’d probably say to be yourself. When I was able to bring myself to the character, that’s when the magic really happened. At the beginning, we were all working out the kinks with the team and everything. My character took a different direction as the show went on, and it changed from being like the mother figure to just their best friend. So, definitely just being myself and bringing that spiciness that I have in my everyday life to Gloria. She’s already spicy. I love that we continued that. That’s what I learned.

JG: With all the changes, especially with COVID, I just have a deep appreciation for the blessing to be a part of a project that allowed us to still be able to perform and be a part of it even through the pandemic. So, appreciation was a big lesson I have learned. Also, piggybacking off these two, to be able to just go hard or go home because you never know when the opportunity is going to be gone. You never know when you won’t be able to do it anymore because of something like this happening to us. Being able to go in there and literally give it all I’ve got. Don’t be afraid anymore. Don’t second guess. Be who you are. Love who you are. They chose you for a reason. This is something that you can’t beat with anything else in the world, to be able to be a part of such a beautiful project like this. I’m so happy.

Baby animals, humorous mishaps, and innocent shenanigans abound in Season 3 of Madagascar: A Little Wild. The show is sure to be a treat for you and your little ones. The series is currently streaming on Hulu and Peacock.