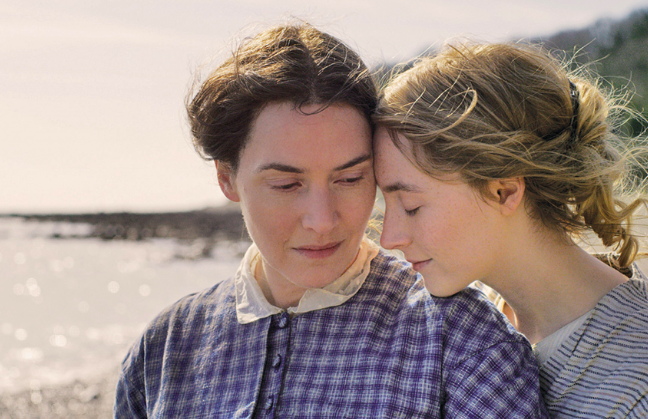 I love a good British period piece, and Ammonite does not disappoint. The film is a story of love, friendship, and kindness that happens to be between women. Ammonite gives us an intimate portrayal of a romance between two people. The film shows a bond that we hope to find for ourselves in the real world. Amid your typical storyline of upper-class meets working-class, Ammonite is an ode to the era of romanticism. The film is full of passion, intrigue, and unexpected excitement, written, directed, and acted gracefully.

Ammonite is a captivating drama that is a gentle collision of love, nature, and life. Director and writer Francis Lee (God’s Own Country) gives us a film inspired by real-life British paleontologist Mary Anning and the friendship she had with British geologist Charlotte Murchison. Set in the 1840s, Ammonite follows Mary, played by Kate Winslet (Titanic), as she lives and works along the coastline of Lyme Regis (now called the Jurassic Coast).

Recognized early on for her fossil discoveries, Mary lives with her ailing mother, played by Gemma Jones (Bridget Jones’s Diary), selling fodder for tourists. When the wealthy Roderick Murchison, played by James McArdle (Mary Queen of Scots), arrives in town with his “melancholy” wife Charlotte, played by Saoirse Ronan (Little Women), he pays Mary to care for her while he continues on his trip. Mary needs money. Charlotte needs to take in the sea air for her health. Despite their differences, Mary and Charlotte develop a bond that changes both of their lives forever. The film also stars the talented Fiona Shaw (Harry Potter) as Mary’s friend, Elizabeth Philpot.

Ammonite should have no problem with Oscar nominations. Everything from directing, writing, and cinematography is top-notch. To start, Winslet does a fantastic job as Mary Anning. The film is about her, and she takes the spotlight with ease. The title itself morphs into the perfect word to describe Mary. She’s a hard-shelled woman that has built up all these walls to keep people out of her business. Ammonites have an interior divided by septa into chambers. Mary has learned to compartmentalize her experiences. Different rooms tell different stories about her life. Winslet does a brilliant job letting the audience see glimpses of what those rooms contain. The relationships and experiences she has make her the woman she is. The audience can feel both cut off and empathetic. The film is all about subtlety, until passion gives way to intensity. Winslet and Ronan are the pair I never expected to see in this type of film, but it works. These women are acclaimed actors, and rightly so. They both represent a shell that needs to be released and tended to with care.

Lee has written and directed a beautiful film that leaps off the screen with carefully crafted visuals. The symbolism is skillful in its display. It makes a long-lasting impression on the audience. Lee is poetic with it. It is suggestive until it’s in your face. There are a couple of explicit sex scenes that showcase the passionate love between the two women but they are done in a way that doesn’t make it the center of attention. You understand how Mary and Charlotte got to that moment. Lee does a great job making sure the audience understands that it’s not just physical, but it’s a life-altering, soul-changing, and understanding love that changes who these women are at their core. Moments like that are not always tangible or easy to describe. Mary and Charlotte are coming from different versions of strained relationships with the people who are supposed to love them unconditionally. Ammonite isn’t about sex or love between two women. It’s about unlocking that part of you that has been closed off for so long. It’s about finding love and compassion amidst pain, suffering, and loss.

I am a sucker for romance. Lee has crafted a romantic film that is a cut above the rest of the romantic dramas we see on screen. Lee has a definite love for romanticism. He has instilled emotion and individualism in his film with Mary and Charlotte. He also reveres the past and nature, which paleontology is all about. Nature is just as important in this story as anything else. The film and characters are authentic. Ammonite invokes but does not criticize the past, using it as a tool to show growth. Romanticism is known to emphasize women and children, the isolation of the artist or narrator, and respect for nature. That is Ammonite to a tee. While some will take to criticizing the film for its depiction of two women in love, I hope the popular vote will focus on the emotional display of love, friendship, kindness, and compassion.

Ammonite premiered at the Toronto International Film Festival this year. Neon will release Ammonite in theaters on November 13th, 2020.