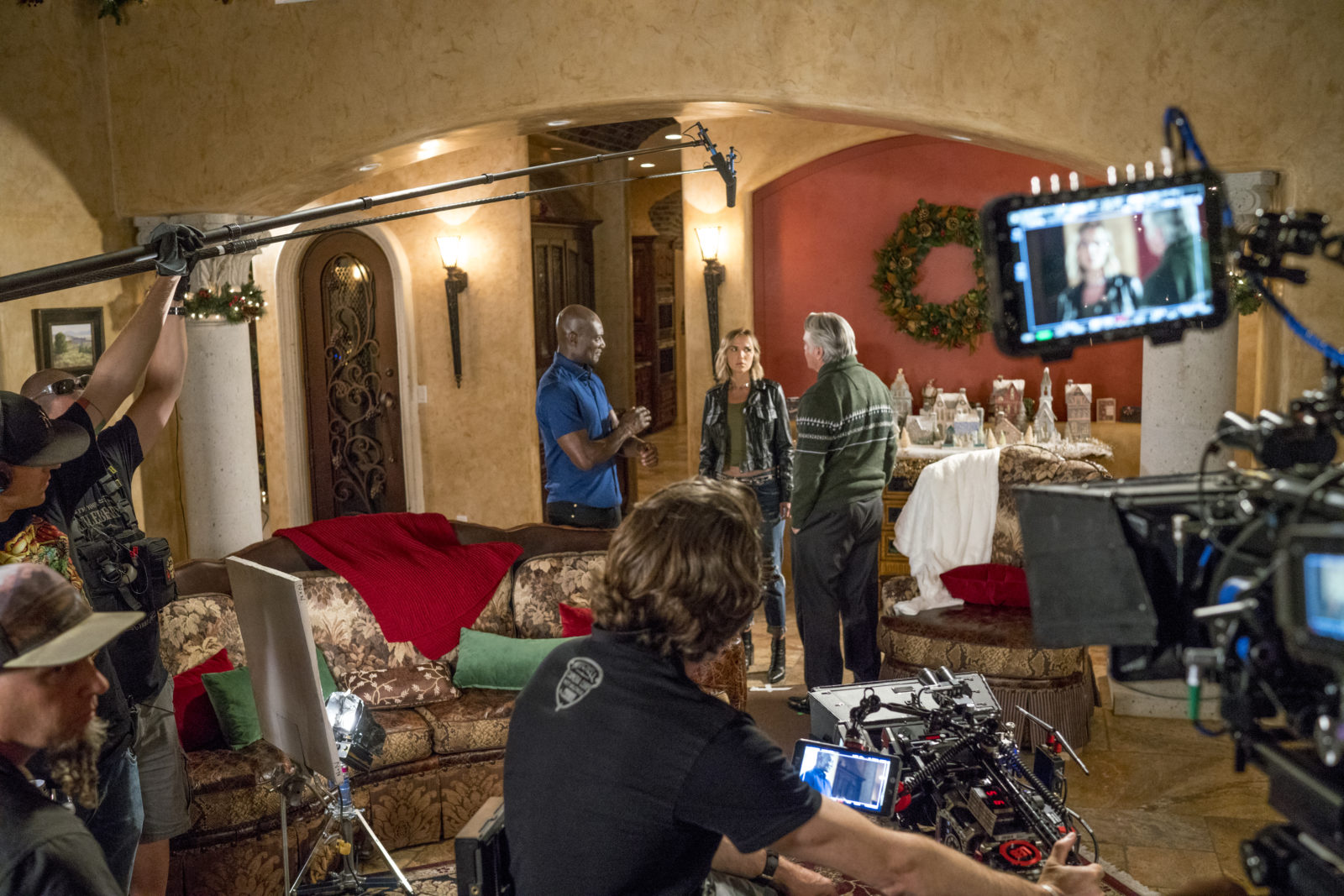 Everything from the character and set aesthetics to the on-set crew are beautifully orchestrated to create the fantastic town that is Midnight, Texas. During my set visit to the fictional town of Midnight, Texas (located in Albuquerque, New Mexico) I had the pleasure of getting an in-depth tour from the Line Producer (Jeff Rafner), the Costume Designer (Daniela Moore), and the Production Set Designer (Beth Rubino) to see how all the departments come together to create Midnight, Texas.

Jeff Rafner is an experienced production manager whose credits run deep and rich within some of Hollywood’s favorite TV shows (Grey’s Anatomy, CSI: NY, etc.). He has become the Line Producer for season two of Midnight, Texas and served as my set visit’s personal captain during our guided tour. Rafner shared with us that one of his goals was “to take everything we did last year and step it up even more.” One of the highlights that Rafner gushed about was the new makeup and effects person whom he formerly worked with on Grey’s Anatomy, Vincent Vandict.

Rafner shared the production process of creating each episode of Midnight, Texas which takes approximately 8 days from start to finish.

Sit with the Writers and Department Heads to discuss the “big picture” of the episode and what to look out for within that episode (approximately 2-3 hours).

Each department: Special Effects, Visual Effects, Makeup Effects, Hair and Makeup, Wardrobe, etc. all break into individual meetings to do a “page turn” on the script. Which is where they go through all the details which are needed for each episode.

Depending on the script, the departments break into even smaller groups to discuss what is needed. For example, if there is a “Feature Set” with a lot of specific special effects, there are meetings held involving all the crew.

Everyone will get on a bus and go to whatever location the production will take place, and talk about what they will be filming.

Everyone returns from the tech scout and ask questions collectively to wrap up and get ready for shooting.

Production begins shooting that episode while simultaneously beginning prep on the next episode.

Moore walked us through her creative process when designing for Midnight, Texas. She begins by reading the scripts which turn into talking with the Directors and Producers about what their ideas are for each character. Initially, Moore is presented with a blank canvas that she can fill in. And through the collaborative process, she gets notes and feedback in order to create the masterpiece of stylings that are in Midnight, Texas.

Moore’s favorite character to design for this season is Fiji Cavanaugh. She couldn’t give too many details, but she was able to say that Fiji’s character took an interesting direction this season. And we are in for an exciting ride with all the upcoming twist and turns!

Moore shared what an average day for her as a Costume Designer on set is like, emphasizing heavily that each day varies.

After reading the script, she discusses the looks with the Producers and Directors.

Midnight, Texas has a lot of flashbacks to different time periods, and most of the research is done online. She starts by looking up images from that particular era and developing a “Midnight” spin to the looks.

The more recent time periods usually call for her to look through vintage magazines.

Then she begins “swatching” fabrics (which is one of her favorite activities to do for her work). Moore shared with us that when she sees the fabric, she knows exactly what the dress or suit needs to look like.

Mostly online, because in Albuquerque, New Mexico, there are limited shopping resources.

She does fittings just about every day.

Moore’s parting words to us were “I love that I get to tell the visual story. It’s not about the words or the lines, but sometimes if someone walks in, in the right costume, it tells you what is going to happen, before they even start talking”.

Beth Rubino is an experienced Set Designer (Quantico, American Horror Story, etc.). She became the set designer for Season 2 of Midnight, Texas. During my set visit, Rubino gave us a tour of the sets and shared some movie magic tidbits that help the show get some fabulous shots.

Rubino gave us a walkthrough of all the interior sets and a sneak peak of the newly haunted “Crystal Desert Hotel and Spa.” Some of the highlights were Olivia Charity’s closet, Manfred Bernardo’s living room, and Fiji Cavanaugh’s home. Although not too much information was able to be shared, we got some character teasers through the books that we discovered in their respective homes though. A fun (and random) fact I learned on the set tour was that the books that are in some of the characters’ homes are designed by a creator that production stumbled upon on Etsy. Keep creating and sharing your work, because you never know who might see it!

The most interesting thing I learned on the set visit was when Rubino shared with us the oculus lighting technique that production is using inside of the hotel. Honestly, seeing the oculus staged in person, I didn’t understand or see the effect. However, when Rubino showed me the production images of how it looks on film, I was a bit mesmerized. The Oculus lighting technique is an innovative lighting strategy used to shape an environment. Rubino simplified the process of achieving the Oculus effect to me as “think of it as shining a light through thread”. While I am unable to share the photographs, I can say that after seeing it in person to seeing its effects on film, it is an aesthetically satisfying technique to create a beautiful shot.