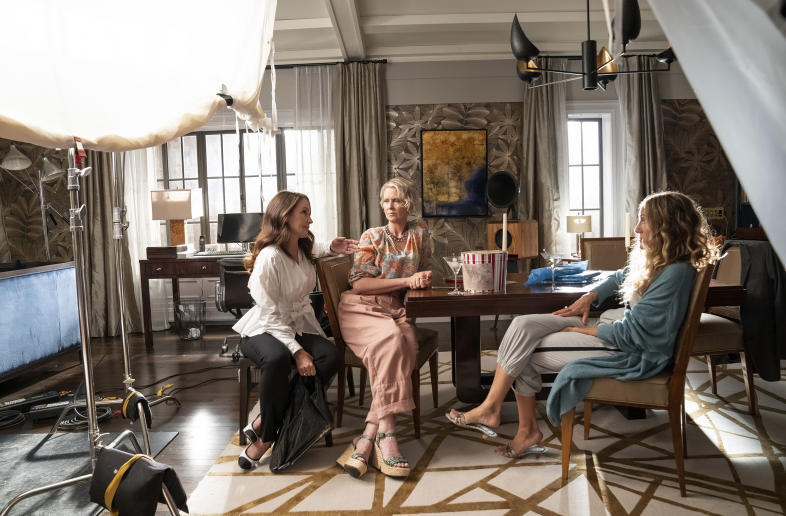 Before we know it, time flies and people change. The same is true for the iconic ladies of the late 1990s Sex and the City series. However, unsurprisingly, the fabulous friends — sadly minus Samantha Jones (Kim Cattrall) — Carrie Bradshaw (Sarah Jessica Parker), Cynthia Nixon (Miranda Hobbes), and Charlotte York-Goldenblatt (Kristin Davis) are still thriving in New York City.

HBO’s And Just Like That is directed by original Sex and the City writer and director Michael Patrick King and takes place 11 years after the film Sex and the City 2. This 10-episode comedy-drama is all about the need for growth, transformation, and letting go.

With the introduction of new and diverse characters, the series seems eager to convey that while difficult, change can often be for the best. After an entire original series filled with brilliant writing but also plagued by a gross mishandling of Black and Brown narratives, missing representation, and other problematic depictions, it’s a new day.

BGN was able to catch up with King, Nixon, Davis, Parker, Pittman, Choudhury, and Ramirez during their Zoom press day to discuss their thoughts on the show’s transformation, and diversity, and all things they’re loving about this new sequel series.

King explained, “The thing about the old series is that they were incredibly up to date. When they were 35 in that time, 1998 to 2000, they had everything, and the joke was that Carrie didn’t have a phone. She didn’t go online. We were the first series to actually ever put the Google page on camera. No one even knew what it was. We were like, ‘Could you call Google and see if we can type in Alexander Petrovsky [Mikhail Baryshnikov]?’ And people were like, ‘What’s that?’”

Today the girls follow in their own footsteps by following current trends, with podcasts, smartphones, a Peloton, and other new tech.

King explained, “I mean, we evolve. They reflect people. So, it was no problem at all. If society is about survival and Carrie’s a writer and she has to survive, she’ll get Instagram. She may not be killing it, but she’s got it.”

Episode 1, “Hello It’s Me,” jumps right into Miranda’s first day of school, as she’s left law behind to pursue a master’s in human rights. However, she ends up having an unexpected lesson on her first day on how to adjust to a diverse environment when she accidentally offends both the class and her Black woman professor, Dr. Nya Wallace, with some ignorant microaggressions.

Nixon explained that this is actually a fruitful learning experience for her character. “I think that Miranda’s generally such a self-assured, very opinionated, and, at times, bossy character, but she is very deliberately putting herself outside of her comfort zone and trying it at her advanced age of 55 to really enter a new world.”

She continued, saying, “She’s fumbling a lot and falling down and getting up again and falling down again. I think what she’s doing is very, very brave, albeit awkward, but it’s very difficult to try to talk about race if you’ve never tried to talk about it before. It’s easier for white people to just keep their mouth shut, but there’s 400-plus years of slavery and institutionalized racism. It’s very hard to even know where to begin to discuss it. But, you know, Miranda is trying and doing it badly, to what I hope is great comic effect.”

For both Miranda and her professor, it’s definitely an interesting experience. As Miranda is trying to upgrade her wokeness, Nya is struggling to start a family at an age that society often labels “too late in life.”

Pittman said, “One of the things I think Sex and the City has done well is presented the stories of what challenges women around women issues, things that we have to deal with. They present them, but they don’t always provide solutions or resolutions either. They just present the story and walk through in the most authentic and humorous way that allows us to do it.”

“There’s a trope of Black women in television. It’s that we are powerful and that we are doing it TNL [To the Next Level]. It’s important for me. In all the work that I’ve done, I’ve delved into the areas where women, especially Black women, aren’t so powerful — we don’t feel that power. We actually feel quite small and vulnerable.”

Nya feels weak as she goes through in-vitro fertilization in hopes of having a family, which is a similar path to Charlotte throughout most of the Sex and the City series. However, And Just Like That also addresses that family problems don’t vanish, even after children are brought into the world.

Charlotte undergoes her own parenting challenges when struggling to accept that her biological daughter Rose (Alexa Swinton) has a very different gender expression than she does, which may even mean she doesn’t identify with Rose gender assigned at birth.

Davis shared, “I think that’s parenting really, and it’s not easy. For somebody like Charlotte, where control is such a key element of her personality at all times, I think it’s perfect that she has children who are going to surprise her and push her buttons and ultimately expand her ideas of who she is and who they are.”

By comparison, juggling motherhood, friendships, marriage, and her overbearing mother-in-law is nothing new for Lisa, who’s a very strong and thriving character.

Parker explained, “I think that for many reasons, this character is important because it just shows a different kind of African-American woman living in New York City who’s real and who exists, and also a grown-up who is still living her life, still thinking about what she wants for her family, for herself.”

Of course, family and relationships aren’t monoliths, and Carrie’s friend Seema highlights this as she navigates the dating world as an “older” professional looking for love.

Choudhury said, “There’s always a little heartbreak when you realize you’re in your fifties and asking why you don’t have a main love and do you have the energy to look for that. It’s a really deep thing because we’re told we’re supposed to get old together. But what if you don’t have that person? Hopefully, the show will answer that a little and help us.”

As many of the characters struggle to understand themselves, Che seems more self-aware, as they challenge Carrie to be more open about herself and her sexuality on their podcast. In many ways, they also challenge everyone to be more vulnerable about who they are in general, a podcast being a pathway to start.

Ramirez shared, “Well, I think the reason the podcast medium is an important one to include is because it’s a true reflection of the world that we live in right now. It keeps the show relevant and current, and reflecting the world that we live in, it’s inclusive of the various mediums that most people are getting their messaging from. It’s a great space too, to engage a lot of different types of personalities without necessarily getting wrapped up in what people look like.”

The series arrived on HBO Max on December 9, 2021, and will have new episodes airing on Thursdays at 3 a.m. ET and midnight PT.