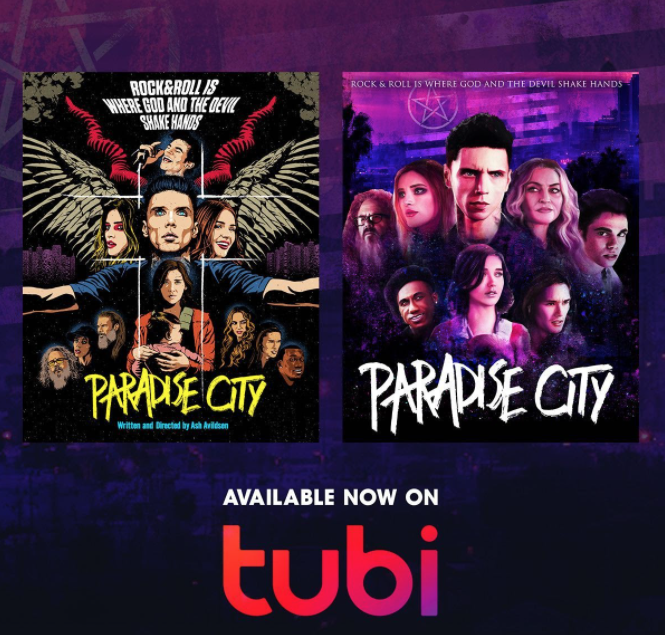 Are you a fan of those old-school band biopics? The ups and downs of a group of musicians who just want to make it in the industry and keep their personal lives together while fighting off the dark side of fame? Well, there may be a series that’s made just for you if you don’t mind a little occult with your rock music. After Paradise City joined its movie precursor American Satan on Tubi not that long ago, we thought it’d be fun to take a look at the two and see if they rock or flop.

American Satan is a movie about a fledgling rock band consisting of frontman Johnny Faust (Andy Biersack), guitarist Vic Lakota (Boo Boo Stewart), second guitarist Leo Donovan (Ben Bruce), and drummer Dylan James (Sebastian Gregory). The members of the band all move to Los Angeles to pursue their music and land a record deal. In LA, the band holds auditions and that’s where they meet bassist Lily Mayflower (Jesse Sullivan). Where the movie’s more occult plot threads lie are in the appearances of two characters: a homeless man claiming to be the archangel Gabriel (Bill Duke) and Mr. Capricorn, who claims to be the devil himself, played by none other than veteran actor Malcolm Mcdowell.

The movie has all the usual ups and downs of a band story with the initial success, the inevitable controversy, and the climactic end with the main character choosing to be a better person and not give in to the dangerous trappings of the industry such as drugs, sex, and arrogance. What sets American Satan apart is that all of these pitfalls are shown through the lens of demonic influence, almost falling towards the dreaded Illuminati allegory. But the film does a good job bringing things back to the core story, which is more about the band than it is the satanic themes.

The follow-up series, American Satan, takes place a few years after the ending of the movie and follows the band as they try to make a comeback after being on hiatus. Lead singer Johnny is living with his long-term girlfriend Gretchen and doing his best to keep the relationship afloat after what transpired in the movie. (After watching the movie you’ll understand why he’s so set on making things up to Gretchen.)

There are also new characters, such as Simon, played by Cameron Boyce in his final role, and Fairuza Balk as Lizzie Thomas, a woman whose daughter has interesting ties to Johnny. There are some other cast changes as well, particularly within the Relentless. James Cassells joins his Asking Alexandria brother Ben Bruce in taking over the role of Dylan James, along with former Disney Channel star Bella Thorne joining the cast as Lily Mayflower after Jesse Sullivan stepped back from the role.

The movie and the series sport great cinematography and direction, as well as portraying clear and defined characters without feeling one-dimensional or stunted. With the change in casting between American Satan and Paradise City comes some variation in characterization. Thorne’s portrayal of Lily comes across more like someone who’s trying to be better but can’t quite get things in order, while Sullivan plays Lily as a hard-edged person who doesn’t feel the need to make amends if she doesn’t want to.

Oddly enough, there also seems to be variation in how Andy Biersack plays Johnny between the movie and the series. In American Satan, Johnny seems genuinely repentant for his actions and wants to make things right, while in Paradise City, Johnny is so focused on maintaining his relationship with Gretchen that he’ll cast aside the people around him and ignore clear responsibility for his actions if something doesn’t serve the end of keeping Gretchen in his life. He has an unfortunate habit of lying to Gretchen and hiding things from her to this end as well. It makes it seem as if Johnny sees Gretchen as a trinket from his past and not as a romantic equal or a life partner. We’ll leave it up to the viewer if this assessment is sound or not.

With both the movie and series now on Tubi, a free streaming service available online, on Roku and Firestick devices, as well as smart TVs, it’s not hard to catch up with Johnny and the Relentless in this journey of love, loss, and rock ’n’ roll. With Sumerian Records recently alluding to news coming soon, it’ll be interesting to see if the Relentless can continue their climb to the top and if Johnny can keep all of his plates spinning as he has been.

Interested viewers can watch Paradise City on both Prime Video and Tubi and American Satan on Tubi as well.