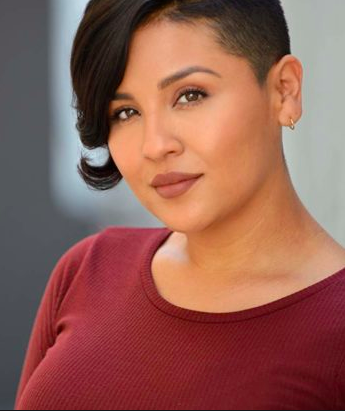 Her character on the new Netflix and America Ferrara–produced dramedy Gentefied is twenty-seven-year-old Lidia Solis, a secure, sincere, independent, no-nonsense, Type-A college professor. A Stanford grad who “got out the hood,” Lidia returns home with two degrees and a desire to make a difference. Both women hail from Boyle Heights, a Latinx community in East LA experiencing rapid change. On a crispy-hot spring day by Cesar Chavez Avenue, we sat with down for a chat after the filming of one of the season’s final episodes. We discussed what it’s like to be a part of a show that hits so close to home and why she’ll never stop representing her gente.

Tell me more about your character.

Lidia is Erik’s girlfriend. We’ve been together since we were kids. She’s the good girl who got up out the hood, went to Stanford, and figured it out, but she still has her feet firmly planted. Lidia’s about inspiring everyone and saying, “F*ck yeah, we are this, but we can also be so much more.” She understands, “I’m from here, this is who I am, but I’m also an educated-ass b*tch.” She’s a badass, and I can’t wait for folks to meet her.

How does this role differ from your previous roles?

I’ve played a lot of stereotypical parts, like the chola. That’s why this one is so close to my heart. I’m finding so much healing through Lidia’s story because she reminds me of my mom, who was a single parent. Through her, I realized before my mom was my mom, she was a whole woman trying to get her feet on the ground and become a professional. She had real needs and feelings.

I’m also passionate about Lidia’s pride. I remember growing up and not wanting to be Mexican. I wanted to be Puerto Rican, Colombian, like that book Anything but Mexican. Kids at school would say, “Ah, you’re a gardener, huh. You clean houses.” Let me tell you, for a minute I was cleaning some houses, but that’s not all I did, it’s not all I am. Then in college, I took Chicano studies classes, studied the Aztecs, the Mayans — that’s the lineage I’m from. You can’t become what you can’t see. Growing up, it would have been nice to have seen someone other than Rita Moreno who made it in entertainment. She’s a powerhouse, hell yeah, but we needed more. That’s why my character here is so powerful.

How has the community changed? Are the changes reflected in the show?

My family has had firsthand experience. My dad lives in City Terrace, and right next to him, there’s a lot of new white faces. It’s frustrating because they’ve called the cops on him, my little sister who’s thirteen years old, my mom. This whole area, before it being Latinos was predominantly Jewish. Then Latinos moved in and white flight — they all went up to Northridge. Then what happened? Police stop policing the area. Inevitably streets get messed up. Now the economy’s down. So what do people do? Who has money because the system’s just served them better? They put their hand in the pot and try to change everything around them. The issue is that before them, this was a working organism. People grew and flourished here.

Another issue is that there’s not enough access to accurate information, so a lot of long-time residents are afraid to fight. They don’t know their rights. Hopefully, the show empowers them to use their voice. We also try to show the internal and external struggles within every character, like the fact that they’re trying to fix the family business. It’s like, “What do we do?” Sometimes the balance is in bringing people inside to show their appreciation for the culture, but without allowing them to think they can say, “Actually, you should do it like this.”

They’re doing an excellent job representing our gente as authentically as they can. The creators spoke with Defend Boyle Heights. They’re forming a conversation, and that’s what we need. Everyone has opinions about what we’re doing here. If someone does disagree, create something else. Show us your rebuttal. Let’s do a little bit more digging. If your art isn’t representing the time, then why are you making it? You know? The fact that I get to play an adjunct professor from East LA College, in all my glory, looking like this with a shaved head, not having to code switch, but knowing when I’m in front of these people, I can code switch, is so powerful. You can’t become what you can’t see. I’m happy to be a face and a voice for people that have felt like they haven’t had one.

What film locations excited you?

Oh my god. We got to do a scene across the street from White Memorial [Hospital]. That for me was like, “F*ck!” I knew so many people that were born there. My cousin was born there. My tío did a mural there and at Mariachi Plaza. My dad has performed so many times there. He’s a salsero; he’s badass. His name is Gabriel Gonzalez (shameless plug). He and my little brothers have performed there. Even being able to shoot here on Cesar Chavez Avenue, that’s amazing. And we get it. People drive by and give us foochie faces, you know, but we’re trying here. We’re trying our best to show the community in all its glory and not take away, but give appreciation to it. You know what I mean. So I’m excited.