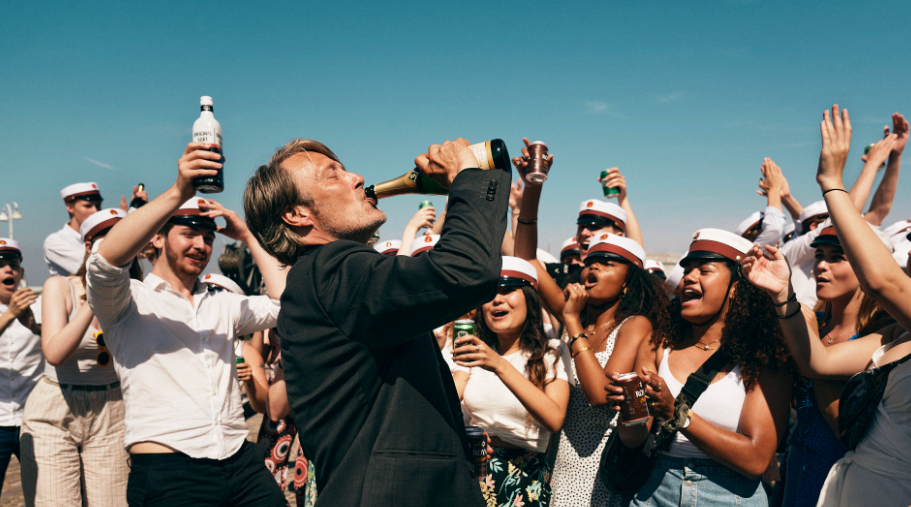 Foreign films have gathered more interest and popularity. These films often give perspectives on other cultures for many who might not be as familiar with them. The Danish film Another Round achieves just that. This film explores its themes through drinking and an attempt to recapture happiness from youth.

There is something so intoxicating about youth and the endless possibilities of life. As we get older, that idea seems to disappear for some. The boundless promise once held so close moves further and further away.

In the film, a group of four friends attempt to see for themselves if alcohol can improve their mundane lives. The Danish director Thomas Vinterberg, along with his co-screenwriter Tobias Lindholm, attempts to capture the very essence of this notion. Their film, as alluring as the concept appears, falls just shy of developing a story that builds on this nostalgia.

Another Round explores a thought-provoking concept by which many who are disillusioned by life might find common ground with and might even gain some comfort from it. As people progress through life and come to certain realization that life won’t be as great as they believed it to be, they start to long for their past and youth. What is lost might never be able to be regained, yet this film explores a possible escape and a return to that sense of youthfulness and happiness through the consumption of alcohol.

A philosopher by the name of Skarderud believed that people are born without an adequate amount of alcohol in their blood. He believed that if people were to maintain a certain alcohol level in their blood, their minds will be more open, more creative, and in a better mood overall. Just a glass of wine here and there will help people open more and be in higher spirits. While the effects of alcoholism and its abuse are known, the film does bring this problem to light.

A group of Danish friends who are all high school teachers show their devoted connection to one another by taking on a project that they believe will improve their lives. Martin (Mads Mikkelsen) is at the brink of devastation in both his professional and his personal life. Tommy (Thomas Bo Larsen), Nikolaj (Mangus Millang), and Peter (Lars Ranthe) all feel their lives have hit a rough patch. Each one deals with a different problem that threatens their happiness, or what is left of it.

They hang out and drink and think about how far they have come before their lives got so complicated. The question that seems to be gnawing in the minds of the group of friends, at least for a bit before exploring this theory, is how much their lives could improve if they were to take on this idea of having a few drinks daily. Each member agrees to test their breath to ensure they keep an elevated content.

At first glance, this film just seems like a teenager’s idea of a good time filled with fun and alcohol. Yet, further into the film it slowly begins to unravel. Perhaps alcohol allows them to be a version of themselves that they can be happy with. There is this romantic notion in the film that suggests that drinking can change someone for the better — for a while anyways. Yet it hardly seems real. Early on in their drinking experiment, the characters become happier, more creative, and even more open to new ideas. Their teaching becomes livelier and more animated, almost as to suggest that alcohol is some kind of magic elixir that will remedy their problems.

There are a lot of things to appreciate about the film. The actors who play drunk characters is at times amusing. The real-life hardship situations can really hit home, especially for anyone who knows a family member or a friend who abuses alcohol. Even the camera work is simply stunning.

The main issue with the film is the banality of it all. The storyline seems to lack a spark that truly makes the audience feel for these characters. Tragic moments occur, yet there isn’t enough time to get invested with these characters to feel for them as much as they deserve. The notion of drinking to keep a certain mood and to allow one’s mind to become more open is of itself interesting. However, this awareness just isn’t enough to truly gear up the audience emotionally. Had there been just a few more scenes of a little more backstory, it might have been enough.

Another Round is a stimulating take on the mundane lives of four schoolteachers. The film director clearly has an eye for maneuvering his actors to convey a certain mood. The issue lies with a lack of development with his characters to the point where the audience can truly feel immersed. While this film has the potential to reach its target audience, it just missed its cinematic mark to inspire.

Another Round is in theaters December 4 and on Digital December 18th.