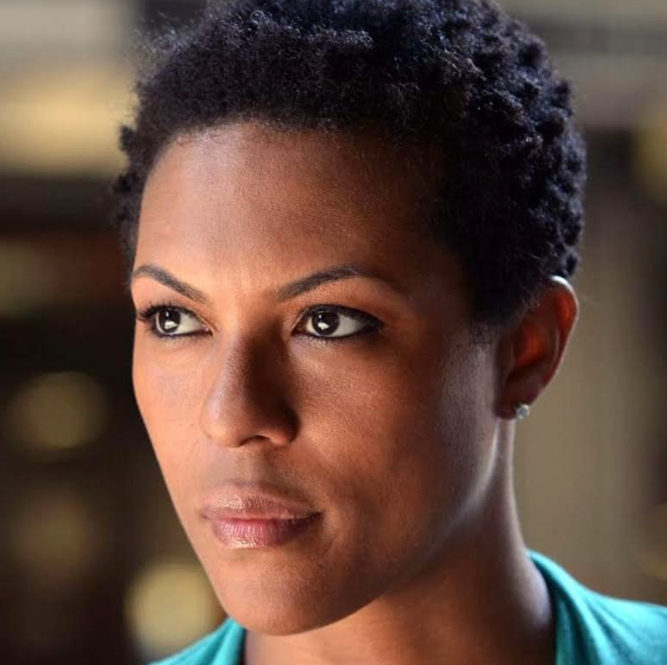 Did you grow up with or know one of those moms that was pretty and fun to be around, so much so that all the neighborhood kids found themselves with their feet under her kitchen table at one point or another? That’s the aura of April Parker Jones.

We’ve seen her most recently in Bel-Air on Peacock, Tom Swift on The CW, and S.W.A.T. on CBS; however, Jones visited with BGN to talk about her newest role starring opposite Hassan Johnson (Flatbush Misdemeanors). She popped up on the screen sparkling in both her blouse and her smile and discussed the new indie thriller Hunther, how she prepared for the role, and whether she’s interested in more thriller/horror roles.

Tell us about the film and your character.

This film is about these two newlyweds, Charlie and Morgan, who decide to begin their new love and their new life in the South. My character [Morgan] has a teenage daughter named Lauren, played by Jasmyn T. Curry. So, there’s this blended family who is learning to love and coexist with one another. As the romance begins to unfold, we find out some things about my husband’s past and also as it pertains to his present relationship with my daughter, his stepdaughter, how it begins to cross boundaries that it shouldn’t. When I find out about it, the story goes into me — me going into what any mother would go to, which is protection mode. Without giving too much away, it’s the story of love in so many different ways: the love that they have for each other, but also the love that my character has for her daughter. [She’ll do] whatever she has to do to protect her daughter, by any means necessary. All right?

This film deals with some heavy topics. What did you do to prepare?

It does. Listen, I’m a mother. I’m a grandmother now. So, it was pretty easy and seamless for me to dip into that mode of protection because that’s what I’ve been doing for the last 23 years. As mothers, we are very selfless and we sacrifice so much for our children. As I prepared for this character, it wasn’t very hard to imagine what I would have to do as a mom to protect my child. That’s easy. I’ll go to whatever lengths to make sure that they’re not harmed in any way, especially by someone who you are so close to. That stinks even harder. The hardest part about probably doing this film was doing some of the stunts. It’s a thriller; it is action in some parts. That was fun for me because typically as an actress, I don’t get to do much of that. That part maybe was the hardest part to prepare for.

What drew you to this role?

Most of the time as an artist, I’ll get an opportunity to audition for a role and, whether it draws me or not, if it’s work, I usually take it. But for this particular role, I was contacted by the production team and offered to play this part, which was the first time I had ever been offered a role. I was so flattered. And what drew me to it was just being able to connect as a mother already and to be able to tell the story that a lot of times we don’t like to talk about, especially in the Black community. When we talk about inappropriate behavior, when we talk about molestation, those things are so uncomfortable. I imagine that no group likes to talk about it, but it is a topic that I feel needs to be discussed more. It’s not one of those things that we need to keep sweeping under the rug. I feel if we are more transparent about it as moms and dads, as family members, then we may even be able to prevent a lot of it too.

How was it working with Hassan Johnson as he played such a dark character?

First of all, Hassan is a very charming, awesome man in person, and it’s my first time working with him. We had a blast together on set. Working with him was a joy because he’s so super talented. Hassan did a fantastic job of allowing himself to play that villainous role. The beauty of a villainous character is you don’t necessarily see it coming. Hassan does such an excellent job of hiding that and allowing the audience to fall in love with his charm initially. Then we see the tables turn. Working with Hassan was fantastic. I hope that we get to work [together] again in the future.

This film is described as a thriller. Is this your first thriller and would you like to do more, maybe even some horror?

Continuing to mother. I have two daughters, 13 and 23, and a grandson. He’s so adorable. I have a husband, which makes another kid. I’m continuing to be present here at home, continuing to audition. I’ve been blessed to recur on Bel-Air on Peacock. I’m hoping that they’ll have my character back there. They’re filming Season 2 right now. I play Will’s mom in that show. Hopefully they’ll have me back on S.W.A.T. this season on CBS. I play Shemar Moore’s sister. I’ve been so blessed to just finish the season of an awesome show that was short-lived on the CW called Tom Swift, but it is now streaming on HBO Max, so you can catch the first season there.

Hunther is currently exclusively available for rent or purchase on Prime Video.