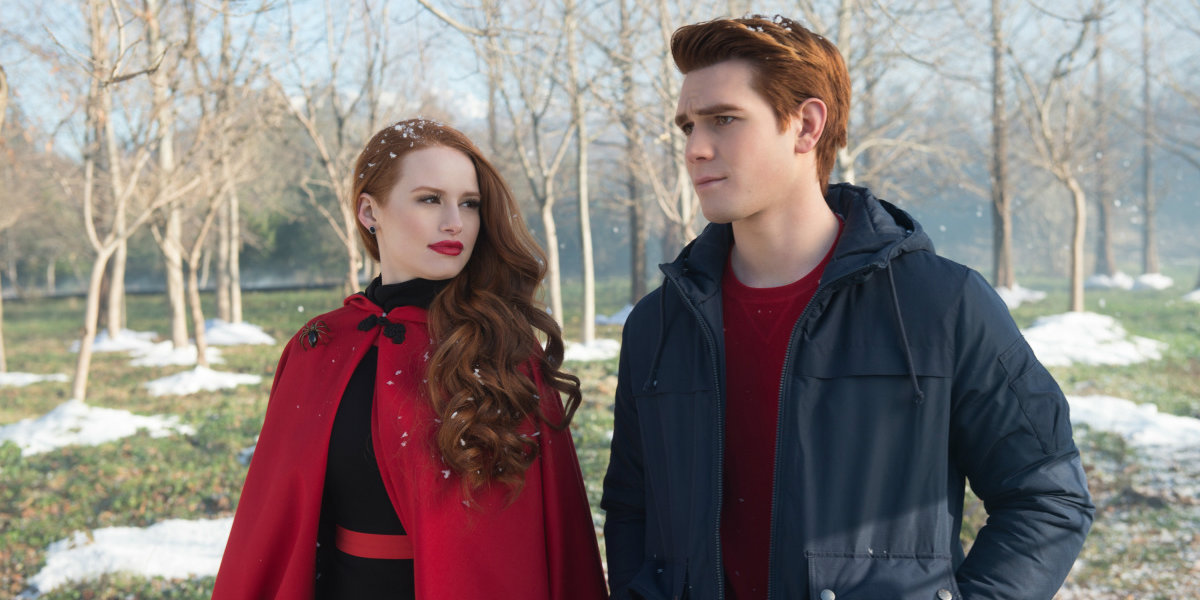 Archie Andrews is, ostensibly, the main character of Riverdale. Like the comics, Archie’s surrounded at all times by more interesting people, and even the show’s struggled to make him stand out — aside from being inexplicably desirable to just about everyone. It helps that K.J Apa is definitely nice to look at, especially when compared to the original Archie with the oddly shaped hair and sweater vest. “La Grande Illusion” commits to this “Studly Archie” narrative readily, as the Blossoms try to sink their hooks into him.

This all starts with Cheryl being intolerable. No one likes her. Her parents are awful, Jason’s dead, Betty and Veronica are nice when Cheryl’s emotionally compromised, the board is only nice when Cheryl isn’t crying over her brother’s death, and everyone else is only nice when they want something from her–like attention or invitations or not being tortured at school.

Archie, however, is perpetually nice for no apparent reason. According to Cheryl, he’s the only person in Riverdale who understands her. He also shares a slight resemblance to Jason (this episode is heavy on the twincest implications), who we’re reminded once again was superior to her in all ways including business. The board of directors were confident he was a good choice to helm the maple syrup company, but they’re not so sure about Cheryl.

Jason barely appears in a flashback, but he’s everywhere in this episode. It’s arguable Archie is the illusion the Blossoms are so hooked on, happily exchanging their memory of Jason for him. Cheryl thinks Archie’s kindness is indicative of some great connection they share, and even the cold and callous Cliff and Penelope are charmed, even though they’d totally think Archie was a simpleton if Jason were alive. They even think this admiration will extend to the board, who they hope will think better of Cheryl if Archie’s her boyfriend which makes no sense because 1) is Cheryl taking over the company tomorrow? and 2) these people disliked Cheryl crying at Jason’s funeral so they’d definitely think Archie was a peasant.

But don’t tell the Blossoms that because they think they’re behaving normally. Archie thinks they’re being weird too, but convinces himself otherwise because going along with it means admittance to a prestigious music program (he says “music” so much it doesn’t even sound like a word anymore). No, the Blossoms aren’t trying to buy him, he says (to Jughead, to Valerie, to Veronica, to Fred), they just really care.

He figures it out later, when Cliff proposes he become Cheryl’s consort and Cheryl lays a kiss on him. Archie’s rejection is enough to send Cheryl spiralling, covering his face with red marker in a promise of vengeance. She’s heartbroken and furious, because not only was Archie not who she thought (Jason), he’s also exactly who she thought. Despite her mortification at her parents trying to essentially pay Archie to date her, she employed the same strategy by giving him an expensive guitar and later, reminding him all the Blossom’s perks would disappear if he rejected her. She’s more angry that they didn’t work, and Archie is as decent as she thought he was, which also means too decent to date her.

Like Cheryl, Veronica’s moral compass is a little skewed. Unlike Cheryl, she’s trying to be a better person which is way more emotionally resonant than the show’s clumsy reminders that Veronica’s “cool” and “cultured.” She turns her attention to the obviously struggling Ethel, reminded of a girl she tormented needlessly at her old school, not knowing Ethel’s parents were victims of her father’s embezzlement scheme. When she finds out, she’s wracked with guilt and determined to make it right how she can, but it doesn’t occur to Veronica not to lie for Hiram in court (as Hiram and Hermione expect her to) until Ethel’s dad attempts suicide.

Suddenly there are real, possibly fatal consequences for Hiram’s actions (Veronica doesn’t even know he’s the one who sent the goons who beat up Moose), and Veronica won’t tolerate them. Her earlier determination to make sure Hiram knew she was loyal (by making sure he knew she didn’t sign over the contract to Fred) is forgotten. Now she’s willing to let his business hang out in court, potentially sending him to prison for a long while. And as we learn, Hiram probably doesn’t take well to being betrayed as his name is added to the murder board when Archie learns the Blossoms orchestrated his arrest.

It’s a relief to see Riverdale hasn’t lost all of its mojo, as the ridiculousness of the Blossoms and their all-red everything makes for delightfully nonsensical viewing. And the parents only monopolize a little bit of the hour.