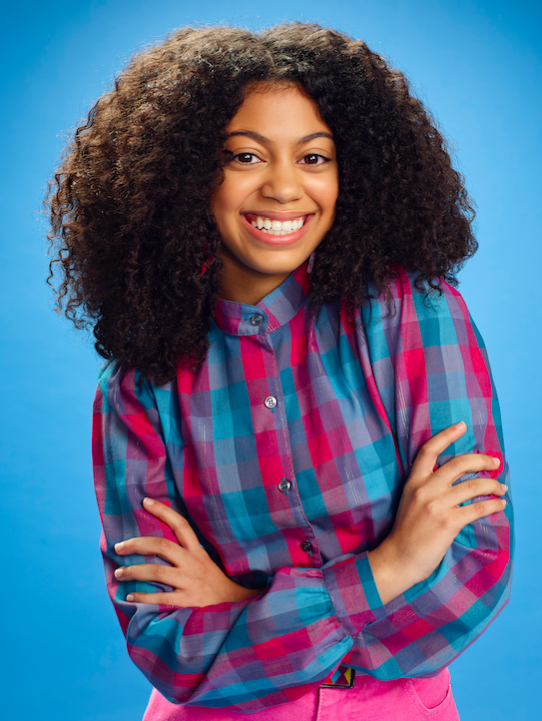 Arica Himmel plays Rainbow Johnson on ABC’s Mixed-ish. The sitcom follows young Bow, a biracial young girl growing up in the 1980s with her family as they assimilate back into society post-commune. Fans are seeing Bow come into her own in Season 2 as she continues to question the world around her and what she believes. Himmel shares important life lessons Season 2 is teaching viewers and how she likes to have fun on set when the cameras aren’t rolling.

What have been some of your favorite topics the show has discussed in Season 2?

Some of the topics that we’ve covered that have stood out to me would definitely be what it means to be strong and what it means to stand up for yourself. Especially with Alicia and Denise in the workplace, seeing how they have to rely on each other sometimes because other people will try to bring them down. And the same thing with Rainbow. People will try to interfere with your life and try to throw some things at you that you’re just not expecting. At the end of the day when you have people who you’re close to like your family members, it’s always awesome that you can just go to them. We’ve covered staying strong and sticking up for your family and even beliefs, what you value in life and how that can help you.

It looks like you have a lot of fun on set behind the scenes. What do you like to do for fun when you’re not shooting?

Yes, me and the other kids love to make TikToks! We’re always making TikToks and dancing. We’re always playing games, even with the adults. We like to do a lot of improv games or they’ll try to do TikToks. They’re just really bad at all the dance moves. We have a lot of fun on set!

The show takes place in the 1980s. What do you love about the hair and fashion from that time period?

This season, especially now that Rainbow is moved on from all the commune fashion and all that, she’s starting to get into the acid wash jeans or the jumpsuits with belts. I found that it’s important when it comes to the costume and wardrobe that we’re starting to see Rainbow’s fashion sense come through, because in Black-ish Rainbow is always wearing something cute. She’s always put together. I feel like now we’re starting to see her come together with her looks.

Is there any advice that Tracee Ellis Ross or Tika Sumpter has given you that’s helped you play this role?

With Tracee, she was able to help me understand that it’s okay to not rely on the character and Black-ish and to just add my own flavor elements to the character and do what feels right. I felt sometimes I was focusing too much on these mannerisms or this or that when I realized, just do what feels right and slowly develop the character through each episode. She was able to help me realize that. With Tika some pieces of advice she shared with me were actually to just always speak up and own my choices. Whether it’s in a scene and I’m feeling a little bit iffy about something, always speak up about it if I’m not feeling right about something.

Do you have any pre-filming rituals or things that help you get into character?

Yes, I love to play music! I play a lot of ’80s music beforehand. If it’s a really early morning on set, I like to play “Wake Me Up Before You Go-Go” because it’s just so upbeat and I feel like I’m in the ’80s. So I love to play music and also play some improv games with the other kids on set and the dialogue coach.