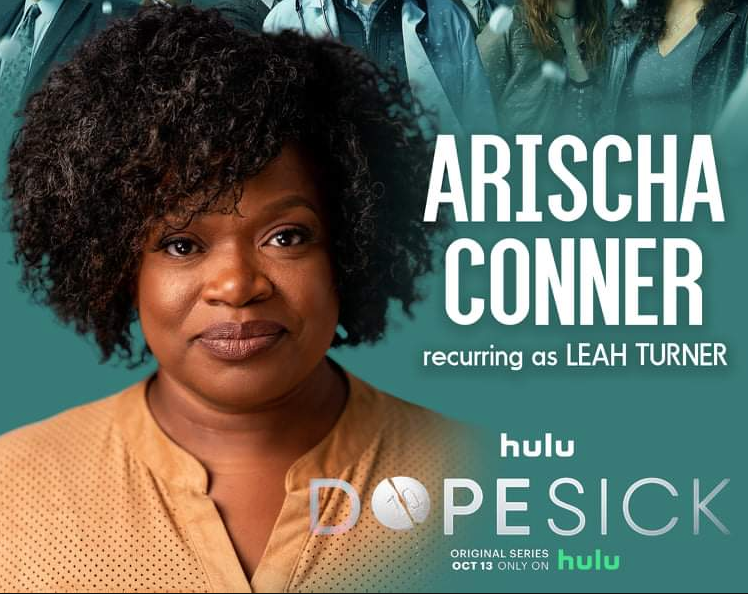 Up and coming actress Arischa Conner has proven that age and the starting point of one’s career do not determine an individual’s success. No matter what age or experience level an actor may be, it’s never too late to gain a prosperous future in the industry.

Conner has expanded her success recently by taking on roles in Hulu’s Dopesick and Apple+’s Swagger. Playing dynamic characters in both works, the actor showed her range and talent as she portrayed characters who were central to the show’s plot. Recently via video interview, Conner spoke out on fighting ageism and her ability to play dynamic characters for roles that tell a true story.

How does it feel to be part of a series like Dopesick where the plot has such an integral message of the crisis currently going on in this country?

It feels amazing to be a part of such a great story and also a great representation of what really happened during the opioid crisis. Previously, I was in a documentary theater piece called Misery Is Optional. We talked about the 40 people who were in active recovery from drugs and alcohol. I portrayed eight different characters. I was able to actually meet those people. To be able to tell their stories and actually meet them on the recovery side was amazing. So when I got the opportunity to audition for Dopesick I was overjoyed because I had already been intertwined with some of the struggles of addiction and I understood what it meant to be Dopesick. I also understood that it does something to your brain. A lot of people don’t know that story from that perspective.

What do you hope that people take away from this series?

Number one, a lot of those persons who got addicted to the drugs didn’t get addicted because they were seeking to get addicted. It was because the pharmaceutical company misled their pharmaceutical techs, they misled the doctors, they misled everybody into thinking that this drug was less than one percent addictive. So when doctors were prescribed this drug, they were trying to help their patients. Some of those patients got addicted because it was just such a highly addictive drug, so in a lot of those cases it wasn’t their fault. A lot of people don’t understand that addiction does something to your brain that changes how you think and makes you feel like, “I need these drugs, I can’t survive without them.” Even for those persons who go into recovery, it takes time for that part of your brain to heal. So I think that, from an educational standpoint, the story is timely. It just educates people on what it is, how it is, what happened. It gives them a better understanding instead of just thinking that addiction is the fault of those persons who are addicted.

Swagger, it was amazing. All of the experiences are amazing. What was great about that is it was actually my first co-star role on a network. Swagger was my first and Dopesick was my second. When I auditioned for Swagger, it was right at the beginning of the pandemic. As I was doing my audition and sending these messages that Apocalypse Anne says, I visualized myself talking to my students. Those are kids who I love, who I had a bond with, and I knew I wasn’t going to see them anymore. I knew that they were going through something. It was therapeutic to me because I felt like every time I was speaking, I was speaking to them. It was an amazing opportunity and an amazing experience.

You’ve proven that age does not determine success. How do you think that we can combat ageism in the entertainment industry?

Number one, people who are older have to realize that just because you’re older it doesn’t mean that you can’t be successful in whatever realm you decide you want to go into at a later age. I’m reminded of Dorothy Steel, who was in Black Panther. She didn’t start acting until she was in her 80s. Every production needs people. They need people of different races, of different heights and builds. They need those people to fill those spaces. I think that everything is opening up from a production standpoint. They’re realizing, “Hey, we can use these persons.” There are so many stories out there being told and so many different streaming services are able to tell them that it’s opening up for older people.

You have a great range of work from Dopesick to Swagger, to Another Tango. How do you prepare yourself for taking on such a range when it comes to roles?

I think of characters like we’re all a connected community — we’re one big community, just in different places speaking in different languages. Because we’re all connected, whenever there’s a character before you, there’s something in that character that you can connect to.

Can you talk a little bit about any upcoming roles or what you’d like to pursue? I heard that you’re a fan of Guardians of the Galaxy.

I would love to be in Guardians of the Galaxy. I love superhero movies, I love action, and I would love to see them have somebody who is like me. I do have a couple of projects coming out. One is called Players; it’s going to be on Paramount+. I’ll be portraying the lead character’s mother. Another one is The Last Days of Ptolemy Gray, which is based on a book by Walter Mosley. Samuel Jackson plays the lead role. It’s a wonderful story. I’m just looking forward to more great stories to tell.

Dopesick is now available on Hulu. Swagger is available for viewing on Apple+.