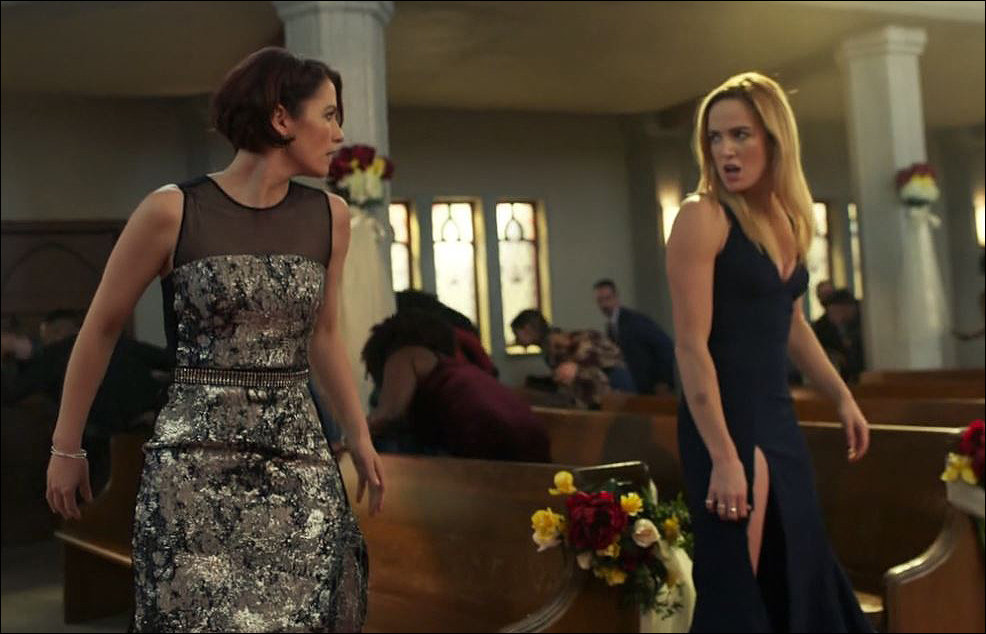 Last week, the culturally tone-deaf writers and showrunners over at CW decided to combine all of the super shows, including the show I cover, Legends of Tomorrow, for a huge crossover event. It was probably done to make the wedding of Barry and Iris (on The Flash) more spectacular. I get that, and I do see the need to cross the shows into one another’s universe, giving the fans a treat once or twice a season.

But, why did y’all have to drag out some damn Nazi’s?

Now, I know my comics and I know about Earth X and the conflict—yeah, yeah, yeah. But, these neutered Nazis could have been replaced with just evil doppelgangers, as my colleague Jahkotta wrote in her The Flash review, without stoking an already volatile social sore spot.

Oh, you don’t know what I’m talking about, huh? Charlottesville, Bannon, 45’s own tweets the same week this crossover aired that promoted anti-Muslim rhetoric? Why pick at a sore that’s already festering when you could have avoided the pain altogether by omitting the swastikas and Nazi tropes for two hours over two nights this week?

But you didn’t do that, and I still have to recap this hot mess. So, let’s look at the some of the moments that stole the show and made this crossover bearable.

1. Sarah is a “rolling stone” (to the tune of the Temptations hit). Our fearless Captain of the Waverider was on the prowl the night before the wedding. The redhead she bedded turned out to be Supergirl Kara’s sister, Alex. Of course, Sarah didn’t know this the night before. However, then she stole the scene when they all met up and realized who was who. Sarah’s smirk as the Supergirl folks fretted was classic! Later, however, she helps Alex with words of wisdom that the Captain of the Waverider is famous for delivering.

2. Snart is…a romantic? The side story of Earth X’s Snart (who they called Leo) and his romance with Ray (really from Earth One, but that’s another story) was the saving grace of this episode. Leo not only saved all the heroes, but he provided a cute side story that elevated the depressing Nazi story. Snart was always the hard, cold, criminal who never cared for anyone, but to see him fretting over his boyfriend was adorable and a refreshing. The story goes that Planet X Ray was in prison for his love for Leo, who ends up helping the team to get free from an Earth X execution. That last kiss goodbye between the two men before they all went off on the final mission was beautiful. Who knew that Snart could be such a romantic? Of course, it’s Citizen Cold, Earth X’s Leo we are talking about. Different guy. The one the Legends knew was too cold to love anyone.

3. Death of a father figure. This was the most moving part of the crossover was a scene that dominated the hour, but also hurt my heart to see. I knew that the Professor was going to leave Firestorm, but I never thought it would be this way. (Did we really have to kill a Jewish character in an episode about Nazis?) Before he died, the man gave the most passionate speech to his Firestorm partner Jax, reiterating the familial tie they built. I am glad they got a chance to make up (which they did after Earth X’s Snart rescued the Legends and other heroes from the death).

4. Mick… in every scene. From his strolling around the Professor’s house in a flower robe because Mrs. Stein told him to put on clothes and his “I hate cops” quip as he sat down next to Barry’s colleagues at the wedding, Mick Rory livened up every scene that he was in. He played that comic relief better than any other superhero in this crossover. There was also his constant harassment of Caitlin Snow to get her to turn back into the Killer Frost he had a crush on. Of course, she is on to his scheme, but her knowledge only adds to the hilarity. Rory kept the scenes light and that’s kinda what we love him for.

5. Professor Stein’s funeral. The entire somber affair was enough to pull all of our attention away from the Nazis. The funeral was beautiful and so was the dialogue between Jax and the Gray family. They always saw him as family. That doesn’t change now that the Professor is gone. In fact, it means that they would hold onto Jax more tightly than before. It was reprieve we needed from the Nazi mess that tried to dominate this episode.

There were many more moments that the Legends of Tomorrow shined in the crossover. Although they seemed to be there as backups to the main Flash and Arrow teams, our Legends still made their imprint on the event.

I just hope this Nazi mess is done now.