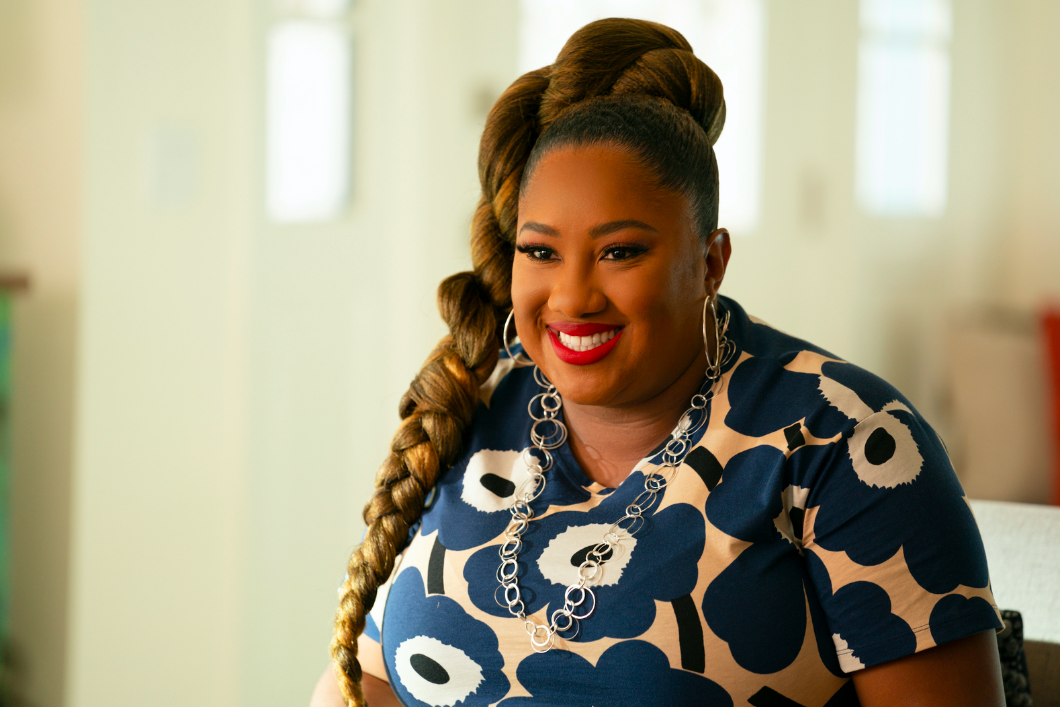 On paper, the premise of Ted Lasso grates the nerves. An American college football coach, who happens to be a middle-aged white guy, is hired to coach a professional British football [soccer] team, and he doesn’t know anything about British football. So why would any person of color, (particularly Black women who have to work three times as hard as we get paid 65 cents on every dollar a white guy makes) waste our precious time watching this kind of tired foolishness? Phenomenal writing, compelling characters of diverse ethnicities, and a global pandemic.

Season 1 of AppleTV+’s Ted Lasso unexpectedly made us laugh and touched hearts when many of us were locked down and attached to screens of all sizes for companionship and comfort last year. Even people who know nothing about European football love the show due to the infectious and complex unconditional kindness the character Ted Lasso (Jason Sudeikis) encapsulates so beautifully.

Setting Ted Lasso in a British Premier League team is the perfect backdrop for reflecting a multiracial society, and Season 2 is even better than the first outstanding season. The addition of Ashley Nicole Black (A Black Lady Sketch Show) as an executive producer has taken Ted Lasso to a new level.

Season 2 opens with the team AFC Richmond suffering a series of tied games after being relegated. When player Dani Rojas (Cristo Fernandez) develops the yips after a traumatic event during a game, the management team decides to bring in sports psychologist Dr. Sharon Fieldstone (Sarah Niles) to help Dani process the trauma and get his goal scoring skills back. Divorcee Ted Lasso is skeptical about any kind of therapy since going to therapy didn’t save his marriage, but he agrees to have the doctor work with Dani.

When Dr. Fieldstone is introduced to the coaching team, Ted reveals his belief that the yips shouldn’t even be mentioned because it’s bad luck. The doctor explains that the yips aren’t superstition and are treatable. When Lasso questions her ability to help, Dr. Fieldstone asks, “Are you good at your job?” Lasso pauses and looks at his coaching team and falters, to which Dr. Fieldstone encourages, “Don’t worry about them. Put all BS humility aside and be honest with me. Are you good at your job, yes or no?” To which Lasso confidently replies, “Yes.” Fieldstone takes a step towards him and kindly says, “I believe you. Well, as good as you are at your job, I’m twice as good as mine.”

Mic drop. Any Black woman who has been second-guessed about her qualifications by a group of white men will stand up and cheer for this particular scene. Sarah Niles embodies Dr. Fieldstone’s confident professionalism expertly.

In later scenes, we see the doctor’s expertise at work. Each time she’s on-screen, she elevates the energy in the room, her comic timing is spot on. When you’ve got Black women in the writer’s room, you get nuance, humor, and authenticity.

Ashley Nicole Black wrote Season 2, Episode 3, “Do the Rightest Thing.” The episode centers Sam Obisanya (Toheeb Jimoh), a Nigerian member of the team who came into his own after the team bully Jamie Tartt (Phil Dunster) left last season.

Sam’s star is rising, and one of the team sponsors picks him to be their spokesmodel in his first print ad. When Sam shares the good news with his family, Sam finds out from his dad the company has been a part of an oil spill in his native country, and the corporation refuses to clean it up. Sam’s dad expresses his disappointment, which puts Sam in a difficult situation. Does he take a stand for his homeland and step away from being exploited and risk losing his job? The writing in this particular episode is excellent. Taking on the issue of colonization in a light-hearted heartwarming comedy could come off heavy-handed, but under Black’s skillful hand the episode is nuanced and compelling.

When creating a multi-ethnic world on screen, having people in the writers’ room who are from different ethnic groups makes the scripts more true to life. As we see the lives of the Black and Brown characters being fully fleshed out this season, the humanizing effect of having diverse writers tell the story makes sense.

The addition of the doctor into the second season adds delicious conflict in totally unexpected ways, and how the conflicts resolve are unpredictable and nuanced. Ted uses his down-home charm to win most folks over, but Dr. Fieldstone sees past his need to control and honestly offers her expertise to support him. It’s so interesting how the entire team benefits from her skills, yet Ted politely resists, thinking he can solve his problems and the team’s losing streak on his own.

Season 2 welcomes the audience into the lives of supporting cast members creating fully developed characters beyond the locker room. In Episode 5, assistant coach Nate (Nick Mohammed) deals with a restaurant hostess “Karen.” The situation could have been cliche, but through the skilled creativity of this writing team and the flawless acting skills of the cast, the episode leaves viewers feeling, dare I say it, nourished. Times are hard, but it’s really nice to look forward to new episodes streaming on Fridays that just make you feel good.