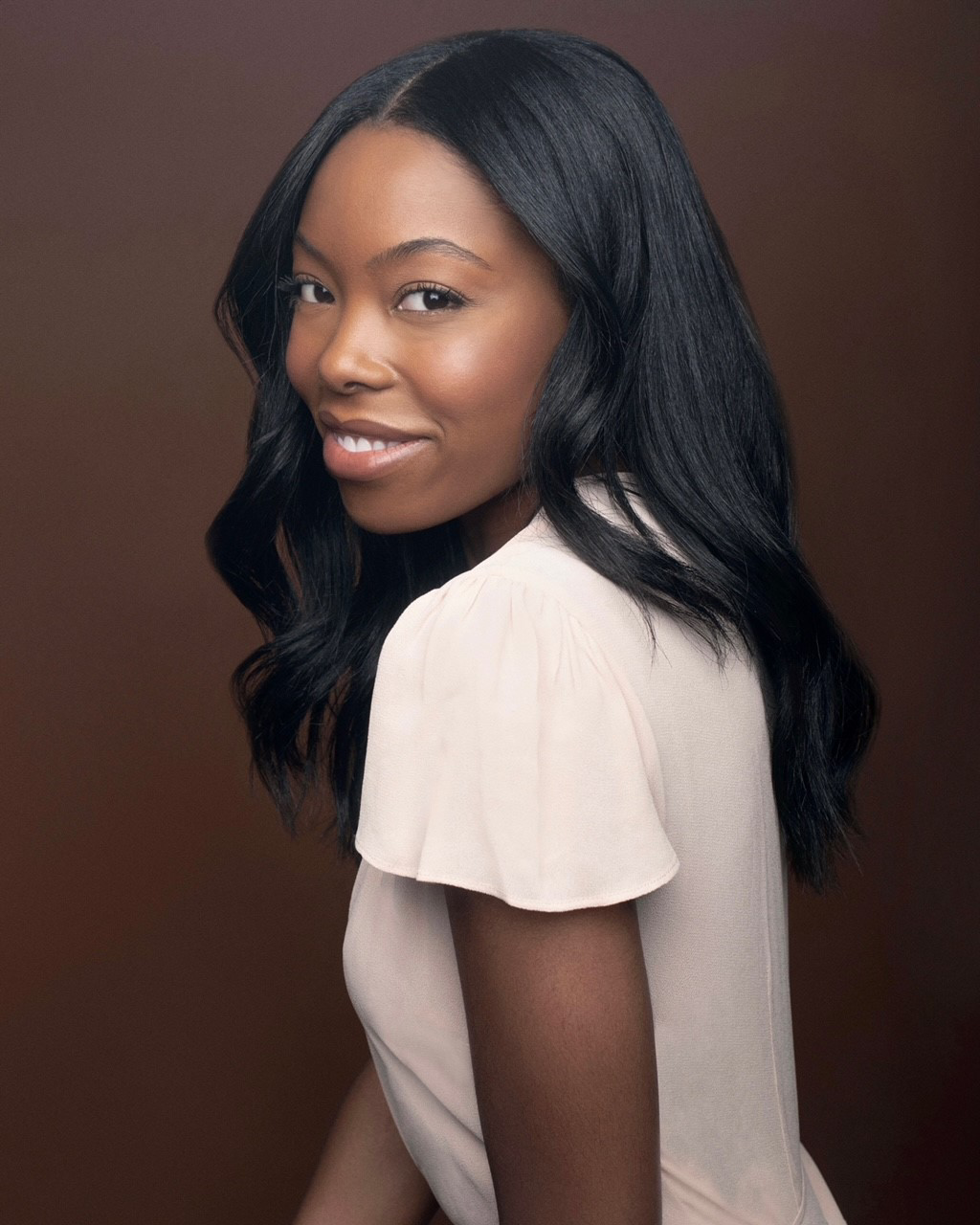 Asjha Cooper, star of the newest Welcome to the Blumhouse feature film, Black As Night, finally finds herself playing a role that was meant for her. BGN was able to chat with Cooper over Zoom, where we discussed this charming entry.

The film itself is your typical Blumhouse Horror fare — irreverent irony with a sidecar of serious tacked on for good measure — with a major difference.

“When I auditioned for Everybody Wants Some,” the young actor describes, “the role was intended for a white girl with blond hair [and] bubbly. That was the character description. That was a lot of what I was going out for when I started in the industry.” Cooper recounts going in for any audition that seemed to include a generic casting to plead her case, and in many cases, it worked.

She did the typical millennial tour of the ABC Family shows, with parts in Secret Diary of an American Cheerleader and The Fosters. She can currently be seen in NBC’s Chicago Med and the CW’s All American. Though Cooper’s work ethic and good reputation in the industry have helped her succeed, she credits the changes in the industry for allowing her to thrive as a Black performer.

“A lot of people ask me what changed when they see I’ve been so busy, and I think the industry has changed. I feel like they’re getting more accepting of Black leads, and they are really starting to flesh out Black leads as full people and not just a caricature or stereotype. There are things now that are actually written for us, and we’re allowed to book them.”

It sounds like something that should be obvious, but the lack of diversity and inclusion in the general Hollywood landscape is what makes this year’s Welcome to the Blumhouse lineup so special. Of the four movies, three of them are directed by women and three are directed by women of color. Three are written by women and two are written by men of color. The diversity is in the roots, so when Cooper saw the script, she knew it was curated to her experiences.

“I was already drawn to the material because it’s a fun movie — it’s vampires and a group of friends trying to avenge a death and having to deal with vampires in New Orleans,” she says. “But there are some heavy things throughout.” The film takes on the issues of classism, colorism, and social justice all in the span of 89 minutes. And yet, interspersed is a charming coming-of-age story of a girl (Shawna) just trying to find her way through life. She deals with insecurities and crushes on boys and everything typically teen.

It’s this generality that makes the specificity of the issues in the movie relatable to just about any audience. While it might be hard explaining colorism, what the white viewer will understand is the concept of insecurity. “The human experience is the human experience,” Cooper says thoughtfully. “We all have insecurities and the more specific you are, the more people [can] relate to you. I think that’s why all of these niche movies are important. Yes, we’re talking about colorism, but what it comes down to is just someone having to build their confidence and see themselves as beautiful.”

Cooper is a gorgeous, darker-skinned Black woman who glows and radiates confidence. Her character, Shawna, wears long-sleeved shirts in the New Orleans sun, saying things like, “I don’t want to get any darker!” The script was written by Sherman Payne, a Black man who cites the women in his life as his inspiration. Colorism — the idea that being darker makes you less than — is something that runs rampant in many communities of color and especially in New Orleans, so much so that it’s become almost a meme itself. Shawna’s brother (Frankie Smith) constantly compares his sister to Wesley Snipes, and one of the reasons Shawna avoids her crush, Chris (Mason Beauchamp), is because ‘he prefers light-skinned Creole girls.’

Shawna appeals to the part of the audience that not only wants her to defeat the vampire infestation of New Orleans but also wants her to defeat her own insecurity. “Every community has things we all need to work on,” she says. “The world has always tried to put people into a certain stereotype that we’re all trying to break out of. And we need to show that we are loved just as we are, that we are okay just as we are, and that we’re worthy of the same treatment.”

All of the characters in the movie have their own journeys of understanding, even the ones who seem to have an abundance of self-confidence. Shawna’s best friend Pedro (Fabrizio Guido) believes he is his family’s wildest dream, and he might be right. A Mexican immigrant, he has an opportunity to go to a prestigious academy. Though he puts on a good front, he is riddled with self-doubt. Still, he provides Shawna with much needed confidence boosts throughout the film.

“Immediately, as soon as we met, we just hit it off!” Cooper recalls pleasantly as she speaks of meeting Guido for the first time. “Our director, Mari [Maritte Lee Go], sat us down, and I’ve never had a director do this before, but she had us each answer 25 questions as we sat across from each other. Not as our characters, but as ourselves. We really bonded over these questions about our inner beings and how we viewed the world.” After they talked about the characters and the bond between Guido and Cooper, the two easily transcribed the kinship onto the Shawna and Pedro characters.

Ultimately, though, while Pedro’s confidence did convince Shawna to take some risks, it wasn’t until she acted for herself that she started to grow. “If there’s an overarching message, I think it’s to follow your truth. I felt [that] with Shawna, constantly, people were trying to deter her from what she wanted to do, which rightfully so!” Cooper laughs a little here, knowing good and well Shawna’s ambition involved tracking and hunting down vampires. “She was trying to do some big things! But she needed to have that experience to grow in a lot of ways — to grow and to love herself and really fix her issues within her family.”

Through her portrayal of Shawna, we see that Cooper’s strength doesn’t come from other people. What others do is remind her that she has it in the first place. “It starts from within,” she says. “As you start having obstacles and start to surpass them, then you can have more faith and trust in yourself, like, ‘Wow! I can do this!’ because you’ve done it before.”

The movie also features performances from Derek Roberts and Keith David and has a culturally relevant yet completely accessible storyline. The second season of Welcome to the Blumhouse premiered Friday, September 30 on Amazon Prime Video.