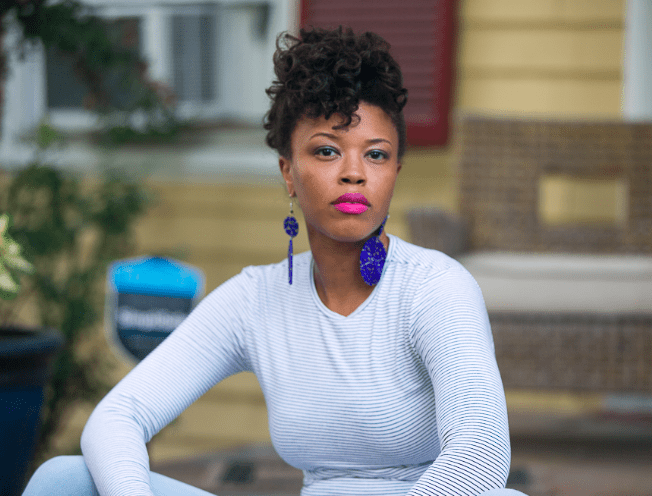 The 2020 American Black Film Festival is saturated with new and seasoned talent. The 10-day event features professionals from all across the diaspora who share a love for storytelling and creating. Alana Barrett-Adkins is no anomaly to those creatives who have a passion for telling nuanced stories. Asunder: One Flesh Divided, featured in the festival, incorporates laughter, grief, and betrayal to tell the story of a man and woman fighting for their marriage.

How did you get interested in film writing and producing?

Actually, kind of by happenstance. I started my own production company in 2015. I basically wrote plays, and I’m a working actor still. I directed the play that I wrote the second time we did it. We did it in Harlem; it was called Women of Adonai. We did it two years in a row, and we were sold out both years, which was amazing. The play was actually based on Biblical characters, women in the Bible. I said to myself, I would really like to hear some real women speak about their own experiences and speak about how they came to faith. I know women who have some really intense stories, and I said, I want to film this, and I want to turn this into a series. We did a proof of concept series on YouTube called “Women of Adonai” project based on real women’s testimonies. I was astounded by how people were receptive, people literally all around the world, particularly in West Africa, Nigeria, Uganda, South Africa, and Benin.

After that I wrote another play called Thunder. Thunder actually started as play and a friend of mine said after we did a reading of it with my studio, “Have you ever thought of turning this into a film?” I was like, “I’ve never considered myself a filmmaker.” But I thought he had a good point. So we started putting things together. At first I didn’t want to direct it. I didn’t see myself as a director, but somebody convinced me, and I was just kind of pushed into it. I wanted somebody else to produce it. I wanted somebody else to do it, but it just seemed like all the roads were leading to me do it. So I rewrote the play into a screenplay. I directed it, I produced it, and I was also in it. Thankfully, we were able to crowd fundraise for the feature. I had no idea what I was doing, but I had a lot of people around me who were supportive, and it just built from there. The love of film started to evolve from that, from just wanting to tell stories, just wanting to capture the stories that I was writing and then the stories that will just come to me. Now I’m in the process of working on another project, another series, actually, having an executive producer on board already. It’s based in in 1875, during the Reconstruction Era, in an all-Black town in rural Pennsylvania.

So that’s a long way of saying that I kind of stumbled into it. I didn’t go to film school, I went to NYU for theater, for drama. So this came as a result of just wanting to get the story out there and then Asunder was eventually born.

A lot of your stories have Biblical allusions and foundations. How does your own relationship with God shape your passion for film?

It was the reason why I started the company in the first place. To be honest. I took a class at my church called Perspectives of the World Christian Movement, which basically changed my life. So obviously, I’m a Christian. I’m a follower of Christ, and that’s at the center of everything that I do. I took that class; it changed my life. I basically realized that the gift that I have is a gift for storytelling. The whole Bible is different stories, one big story, and God wanted to use that gift to reach the world. It says in Genesis Chapter 12 that the descendants of Abraham, that “through you all the nations of the earth will be blessed.” I wanted to see how do I have that. How can the nations be blessed through me? I think that’s through storytelling through filmmaking. That’s why the company was formed.

Now, at the end of the day, I still believe that I make films. It’s not just about making a Christian film. This is a film, these are works of art. But at the base, and at its core, is always an evangelical message. It’s always leading you to God and to Christ more specifically. My faith is very much embedded in everything that I write and everything that I do. Even if you don’t realize in Asunder until about an hour into it, they’re actually Christian people. But it’s always there. It’s always there.

How did you go about deciding which problems Ruth and Brandon would face in their marriage in Asunder?

This whole screenplay, this idea, this story came from a prayer. I pray differently to God because I didn’t really grow up in church. I just came to Jesus and I was like, “Lord, you know, I’m single and I have a plan. I have a serious plan. I think this will work. How about you give me a 90-day free trial of a husband? If it doesn’t work out, I will put them back in the box, you know, like Amazon, put them back in the box and it just will dissolve.” I said it kind of as a joke, but then the Holy Spirit started to really show me things that couples go through, from lust, infidelity, addiction, sickness, not just with your spouse, but also as you see in the film, with family. Family drama — you don’t just marry that person, you marry that person’s family, you marry the generations that they come from. So all of those things come into play. But at the end of it, the idea is what does it mean to really love that person? That is what I wanted to focus on and explore. What does it really mean to really love someone like Jesus loves them? That was the biggest motive in writing the film itself. What does it mean to truly love someone? That prayer basically came out of selfishness, but when you really choose to love someone, it requires a lot of sacrifices as Brandon and Ruth start to see and eventually come to realize on that park bench at the end.

Workplace misconduct is what really causes a divide in Ruth and Brandon’s marriage. Why did you feel it was important to incorporate that issue?

I’m not sure of the statistics on this, but one of the things that I wanted to show was that it was the little foxes. The Bible talks about little foxes spoil the vine. That’s one of the things I really wish I could have elaborated or shown a little bit more in the film was that it was the little comments that Jackson would make, little things here and there, until it led up to something big. I think the workplace misconduct is actually a little bit more believable because it’s based on the infidelity stories that I’ve heard people who have committed infidelity or their spouse or their significant other committed infidelity. It’s usually at work or someplace where somebody is always around them. That just provided that the right set of circumstances, the perfect storm. I wanted to show the little comments. You saw that with Ruth in the kitchen when she was imagining him. Ruth was also vulnerable, and she never stopped it. She had no boundaries with them either, because she was also seeking something and validation from him.

Counseling is still a bit taboo in our culture. What approach did you take to incorporating marriage counseling?

The counselor represents the Holy Spirit and Christ being the Wonderful Counselor, so that was my inspiration for it. But if I could be partial for a moment, I think, especially in the African American community, you don’t see a lot of nuclear Black families. I really wanted to fight for that. I really wanted to fight for the idea of this man and this woman just trying to make it work and not just being like, “Hey, we have differences. You did me wrong and I’m going to end it.” I wanted to show the possibility of what it would be like to just come together and try to hash this thing out. I really thought that was important for them to have a say and for the audience to also experience that, too. In marriages, sometimes you don’t get to hear the full story. Marriages exist within the world between those two people and often you don’t get to hear what’s on the heart of a married man and the things that go on in his house or a married woman and the things that go on in her house. You don’t get to hear the fact that this wife miscarried three times and the husband went out the next morning with his boys to a football game, you don’t get to hear those things. Not only did I want to fight for that Black nuclear family, I also wanted to give these characters the opportunity to voice subject matter and give a voice that a lot of people don’t have access to.

Asunder ends with a huge cliff-hanger. Can fans anticipate Part 2?

Yes, there will definitely be a Part 2. When I first wrote this, I was like, “Great, it’s done!” But then when audiences see it, I realized that I can’t leave them hanging like that. We will definitely have a sequel. It will get more intense. But it’ll also get more faith elements, and we will also try to incorporate it well.