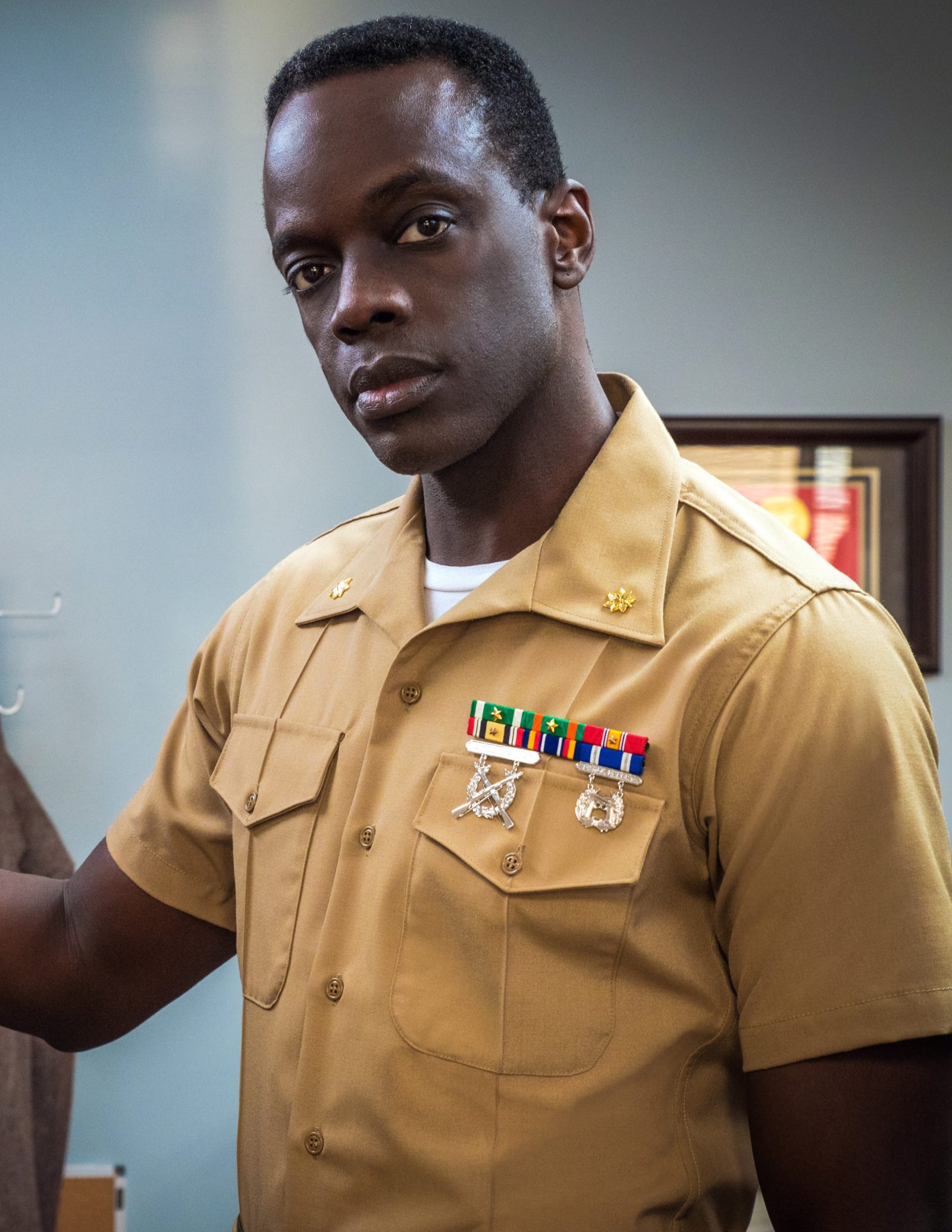 Who can’t resist a dare, especially one that changes your life? Actor Ato Essandoh’s career started with a dare from his college sweetheart to replace an actor in a stage play while he was a chemical engineer major at Cornell University.

Ato got his degree, but the acting bug bit him hard. He’s had roles with TV shows like Copper, Chicago Med, and Elementary. He previously played Vernon Elliott in the 2018 Netflix sci-fi series, Altered Carbon.

Now Ato is playing a U.S. Marine attorney in the new CBS legal drama, and, mid-season series, The Code, premiering April 9. I talked with Ato about the show, his full name, and something about an upcoming Marvel X-Men movie.

I watched a couple episodes of The Code, and your character Maj. Trey Ferry and the character Capt. John “Abe” Abraham (Luke Mitchell) have this buddy theme. It reminds me of Roger Murtaugh and Martin Riggs from the Lethal Weapon movies.

Yeah, I thought the same thing as I read the pilot manuscript. I said, “This is Riggs and Murtaugh.” 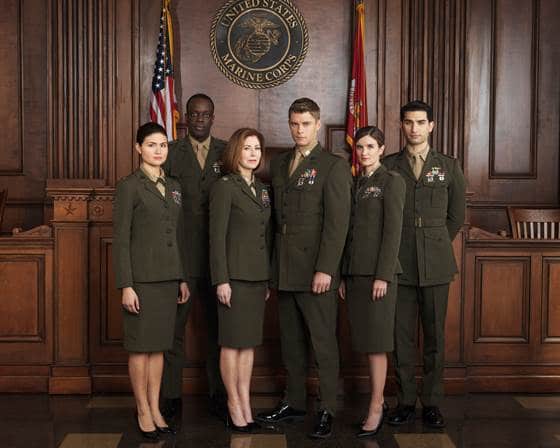 How did you get the role of Maj. Ferry?

It was one of many auditions that I did. I saw the script, and, at first, I did not recognize who had written it. I’ve done a lot of work on CBS, like with Blue Bloods and Elementary — the latter I loved recurring on. One of the writers for those shows was Craig Sweeny. It turns out that Craig is the creator, executive producer, and showrunner for The Code. I got excited because he is such a gifted writer. He pitched it to me, and I was even more excited about it.

There’s been lots of legal dramas on television. What makes The Code different, outside of it revolving around the military, from other legal shows?

I, like you, have seen them all, and I wanted to know what was different about The Code. Number one, it’s the Marines. We’re dealing with how the Marines handle the law. The other thing I like is that you go home with these people and see what type of person it takes to join the military and serve something that is greater than themselves. Plus, you get to see that they are regular human beings. I loved the disparity in all the characters. They are driven people, but they all have real, human problems that they deal with. They bring their problems to work plus handle these cases. The other thing is that the show doesn’t just take place in the courtroom. They go to Afghanistan and other countries, as well as parts of the United States. So, it’s not every episode that we are in the courtroom.

Tell me about your character, Maj. Trey Ferry. From the episodes I’ve watched, I know that he is married, and he and his wife are trying to have a baby.

What I like about Maj. Ferry is that he is a lifer — a born and bred Marine. He loves his job, and he knows that he’s given up a lot, such as a more lucrative career, to be a Marine. He is also a good person. He is willing to see that justice isn’t always served in black and white — it is something that is earned. Whatever he does, even bending the rules to get the right results, he knows that’s what it takes to achieve justice. 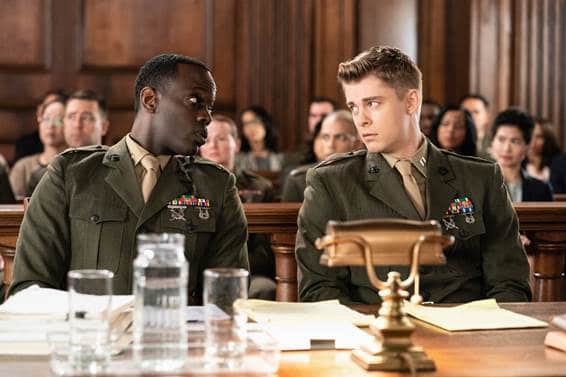 What kind of research did you do to prepare to play Maj. Ferry?

I talked to friends who had been in the Navy, Marines, and other armed services. As I read the script, I realized that I needed to learn how to talk like people in the military. When you mix in the Marines and the law, it’s a different language. It sounds like English, but, it’s not English [Laughs.] I took voice lessons to get those lines out confidently. My research was mostly technical. I just worked to get the legal stuff in my head. We also had an incredible military consultant. He kept us squared away on how we’re supposed to dress, walk, look, and stand.

Let’s talk about the dare.

My boy Marcus and I did a modeling gig, and this woman saw us. Later I get a call at home. The woman asked for Marcus to fill in for an actor who’d dropped out of a play. I knew my boy wasn’t doing that. She asked if I would. I froze! [Laughs.] I told her I’d call her back. I called my girl and told her. She laughed and said she was laughing because she knew I would do it! I did the play and had the time of my life. [Laughs.] I was getting my degree, but I promised myself that I would look into the things that made me happy and inspired me. The need to act kept coming back to me. I took a class in New York, and that sealed it. I called my parents and said, “Look, I’m going to finish up, but I’ve been taking this acting class and I’m giving it a try.” My parents were like, “What?!” They flipped out at first. Then they noticed how I talked about acting, and I started writing and directing plays. They knew I was serious. 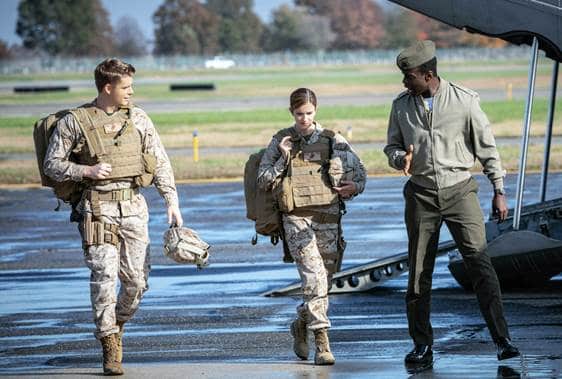 I saw your full name, Ato Essilfi Bracato Essandoh, on your website and how your parents waited seven days to name you because of a traditional naming ceremony.

My parents are from Ghana. In America, when a woman is pregnant, she has the name picked out. In Ghana, it’s more of, how can you give a baby a name and you haven’t seen the baby yet? When you have a child, it’s a family thing. You have all the family attend. They gather around the baby and decide on a name. When everyone agrees, they bless the baby. Back in the day, though, when you had a baby, you did not know if it would live a week. Why name a baby who might not survive? So they waited seven days. Ato means “Saturday born” — I was born on a Saturday. “Essilfi” is after my grandfather, and “Bracato” means warrior.

You have a role in X-Men: Dark Phoenix. Can you talk about it?

You know how these Marvel people are! [Laughs.] They’re coming after your family if you say something!

I can only say I’m in the movie. It’s a cool part. I’m with Jessica Chastain and Michael Fassbender. It’s going to be great.

Thanks for talking to me!

I am a huge fan of Black Girl Nerds. I follow you on Twitter! What I love about you all is that [you show] that there is not only one aspect to Black existence. Just putting “Black,” “Girl,” and “Nerd” together is something that people aren’t used to seeing. That’s what I grew up with as a fellow Black nerd!

The Code premieres Tuesday, April 9 at 9/8c on CBS.